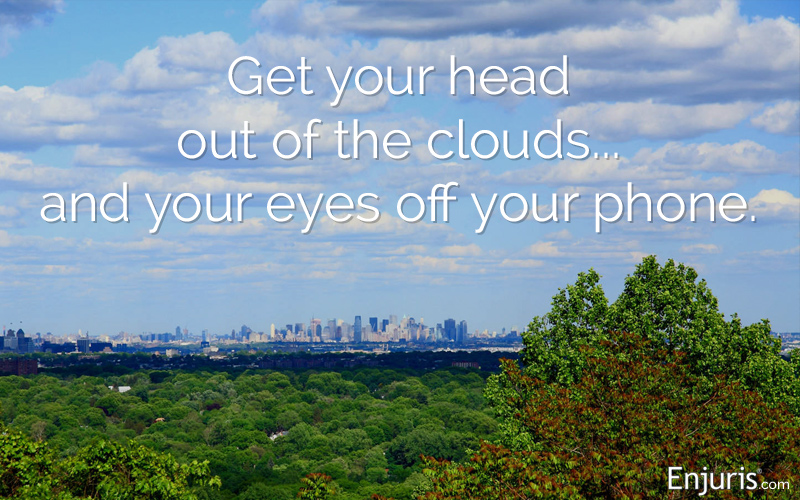 Distracted driving has become a big problem in the Garden State

By now you’re hopefully well aware of how dangerous drunk driving can be, thanks to many decades of increasing public awareness about the problem. Drunk driving was outlawed in New Jersey in 1906. However, it wasn’t until the 1970s and 1980s that law enforcement and government officials really began to crack down on intoxication offenses and sought to make the public aware of the dangers.

There are many people out there who would never drink and drive because they’re aware of the dangers and they’re generally responsible, law-abiding citizens. Yet, those same people might think it’s fine to check a text, apply makeup in the rearview mirror, or reach for something on the floor of the back seat while driving. It’s not okay.

Distracted driving is as dangerous as drunk driving.

We know this because studies prove that a driver’s reaction time is lower when reading or writing a text than it is when impaired by alcohol. Researchers at Car and Driver performed a test to see how drivers’ reaction times were impacted by texting and driving, compared to drunk driving.

To perform the test, the car was fitted with a light mounted on the windshield that would simulate a car’s brake lights. The drivers were instructed to hit the brakes when the light went on. The test took place on an open runway with no obstacles, and the drivers were using typical phones.

Here’s what they found: 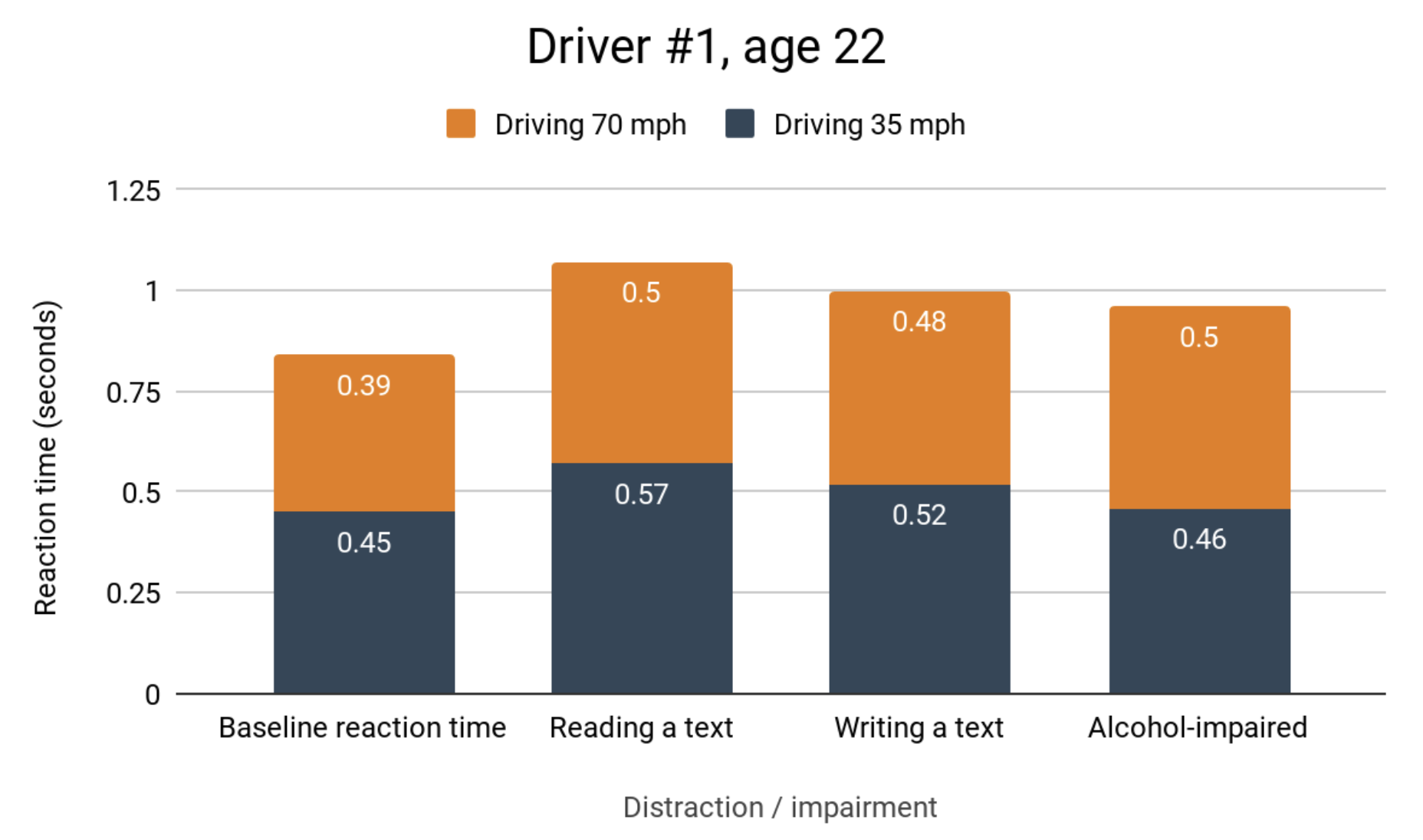 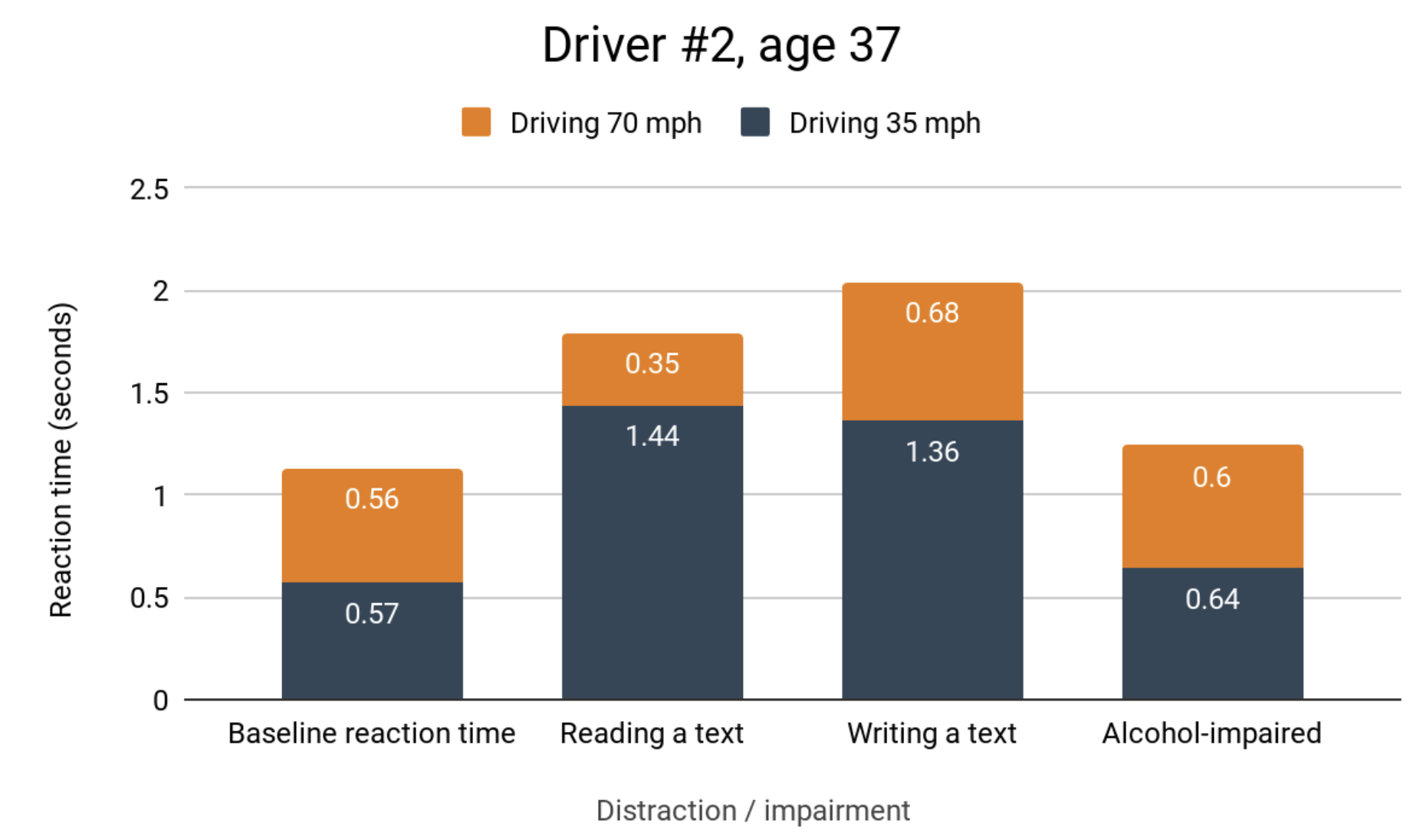 Although sometimes the differences are tenths or hundredths of a second, it’s significant because those hundredths of a second directly translate into the number of feet driven. So, for the additional 0.68 seconds of reaction time it took for one driver to write a text, his vehicle traveled 319 feet — which is practically the length of a football field.

Can you imagine driving the length of a football field with your eyes closed? That’s the effect when you text and drive. Tweet this

The National Highway Traffic Safety Administration reports that 400,000 people were injured in crashes involving distracted driving in 2018, and 2,841 were killed.

And those are just the ones we know about.

It can be hard to determine whether a crash was caused by distracted driving. When a driver is drunk, there are scientific ways to prove their blood alcohol content (BAC) like Breathalyzer testing at the scene. But unless there’s a witness, it could be impossible to know what a driver was doing at the time of a crash.

The New Jersey Department of Law & Public Safety reported that driver inattention was a major contributing factor in nearly 800,000 motor vehicle crashes from 2012 to 2016. The data also shows that “at any given daylight moment across America, approximately 416,000 drivers are using handheld cell phones.”

Distracted driving is when a driver performs any activity while behind the wheel that takes their attention away from the primary task of driving.

There are 3 types of distraction:

Distracted driving can include anything from eating or reaching for your coffee, to reaching into the backseat, applying makeup or shaving, looking in your mirror at your child in their car seat, playing loud music, or adjusting dashboard settings like climate control or sound.

Although each of these behaviors is distracting, using a cell phone is arguably the most dangerous (and most prevalent) form of distracted driving because it requires all 3 types of distraction at once — visual, manual, and cognitive.

Drivers are not allowed to talk or text with a hand-held device while driving in New Jersey. This includes talking, listening, sending, or receiving any electronic messaging.

A driver may use a handheld device while driving with a hand on the steering wheel only if:

A driver who is under 21 years old may not use either a hand-held or hands-free device while driving in New Jersey.

There will also be court costs in addition to these fines.

These are “primary offenses” under New Jersey law, which means you can be pulled over and ticketed for violating these laws even if you’re not committing any other infraction. If you’re driving while using a mobile device and injure another driver, passenger, pedestrian, or bicyclist, you could be charged with a crime or a felony.

If you were injured by someone who was driving while distracted, you might be able to sue for damages. Sometimes, that could include not only the driver but also the person who texted the driver, if they knew that the driver was behind the wheel at the time when the text was received.

Linda and David Kubert were seriously injured when their motorcycle, which David was driving and Linda was riding as a passenger, was hit by 18-year-old Kyle Best, who crossed the centerline of the roadway while driving his pick-up truck and texting. David’s leg was nearly severed and Linda’s left leg was shattered, with her fractured thigh bone protruding. Both David and Linda lost a leg as a result of the accident.

After David and Linda’s attorney produced phone records at trial, Best testified that he and a friend were exchanging text messages during his drive home from work at the time he hit David and Linda. Records showed that Best sent a text to his friend 17 seconds before he called 911 at the scene of the accident. Because that time includes his stopping his truck, seeing the Kuberts lying in the road, and calling 911, it was concluded that he must have sent the text immediately before the crash.

In this case, the court found that there wasn’t enough evidence to find that Best’s friend knew that he would read or respond to her text while driving. The Kuberts settled their claims with Best and did not receive damages from his friend whom he was texting.

The case ultimately led to the New Jersey Kulesh, Kubert, and Bolis Law. This law provides criminal penalties for a person who is distracted by a cell phone while driving, and whose behavior injures another person. It allows a jury to infer that a driver found to be using a hand-held cell phone who caused an accident can be guilty of the fourth-degree crime of assault by auto.

Legal options after an accident with a distracted driver

There are 2 ways you can recover damages after an accident with a distracted driver in New Jersey:

Enjuris tip: You can read more about how to file a lawsuit for your car accident.

You can’t control other drivers on the road. But you can make sure you are doing your part to avoid distracted driving.

What to do after a distracted driving accident in New Jersey

After any car accident, there are certain steps you can take to preserve your legal rights. But you also want to call a lawyer, especially if you suspect that the other driver was distracted. These cases can be hard to prove, and your lawyer will have experts, accident reconstruction professionals, access to phone records, and other strategies to demonstrate that the other driver was distracted.

Most importantly, don’t wait. There might be important pieces of evidence that could disappear if your lawyer doesn’t follow up quickly after an accident.

For example, if the accident happened to be captured on a business or residential video surveillance system, the video might not be saved unless there’s a reason. If the business or homeowner doesn’t know that there’s potentially important footage, it could be automatically deleted within a few days. Likewise, if you have contact information for witnesses at the scene, it’s best to let your lawyer contact them — your lawyer might ask questions that you wouldn’t think to ask, and might seek clues that you’re not aware of.

If you need a New Jersey car accident lawyer, use the free Enjuris personal injury law firm directory as a resource to find the best attorney near you.