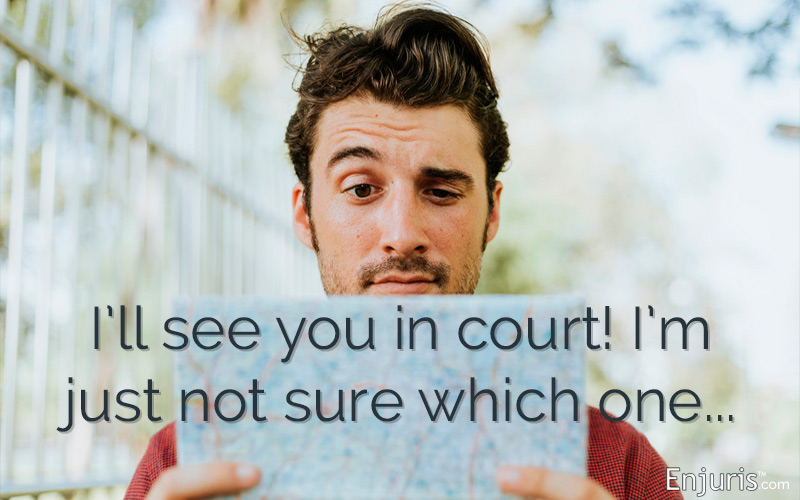 Table of Contents + show
An overview of the various Montana courts that may be involved in your personal injury case
Justice of the peace courts
State-level district courts
Montana Supreme Court
Federal courts
Specialty courts
Venue: In which county should you file your Montana injury claim?
In Montana, you’ll likely file your personal injury claim in 1 of 3 court systems. In this article, we explore these court systems (as well as a couple others) and the circumstances that might lead you to file your lawsuit there.

So you've made the decision to file a personal injury lawsuit. Which courthouse should you head to?

In Montana, there are 3 main court systems where you might file your lawsuit:

The overwhelming majority of personal injury cases are filed in the state-level district court in the county where the defendant lives. However, in some instances, your lawsuit might be filed in 1 of the other courts.

Let's explore all 3 of these court systems, along with a couple other courts where you're less likely to file your lawsuit.

Justice of the peace courts

Montana justice of the peace courts have “limited jurisdiction.” This means that the courts only have the power to hear certain types of cases. These cases include:

District courts are courts of “general jurisdiction,” which means they handle all cases that aren't specifically reserved for another court. This includes:

Unless your personal injury case seeks damages less than $12,000, it will most likely be filed in district court. District court cases don't have a case-in-controversy requirement. This means that the court can hear cases involving any amount of damages.

Enjuris tip: A district court can serve as an appeals court by hearing appeals from justice of the peace courts, city courts, or municipal courts.

Keep in mind that just because your case can be filed in federal court doesn't mean it has to be filed there. You can chose instead to file in state court, though the opposing party might try to “remove” your case to federal court. There are advantages and disadvantages to filing in federal court and an experienced Montana attorney can walk you through them.

Montana has a number of specialty courts. These courts only hear cases involving certain disputes. While most of these speciality courts deal with issues unrelated to a personal injury claim (drug issues, criminal issues involving juveniles, etc.), there are 2 specialty courts you might want to be aware of:

Venue: In which county should you file your Montana injury claim?

Once you've figured out the appropriate court system, you'll need to decide the proper venue. The term “venue” refers to the geographic location of the court. In other words, you may decide you need to file your case in district court because the damages claimed are significant and there's no federal question or complete diversity.

But in which county do you file your lawsuit?

Let's say you're involved in a car accident in Gallatin County with a driver who ran a red light. You live in Yellowstone County and the defendant lives in Flathead County. You're injured in the accident and are claiming damages in the amount of $20,000.

Need help figuring out where and how to file your personal injury lawsuit? Use our free online directory to locate a Montana attorney in your area.