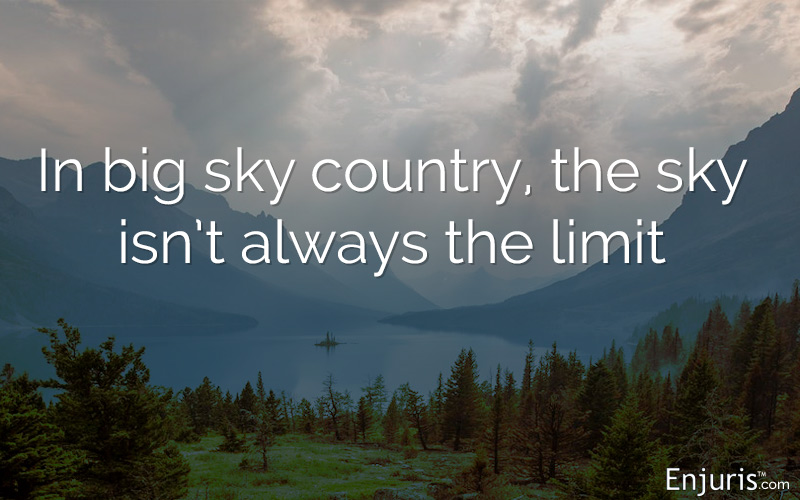 A “damage cap” is a law that limits the amount of compensation an injured person can receive in a lawsuit. It may be hard to believe that a state with the nickname “Big Sky Country” would put a cap on anything, but it has.

Let’s take a closer look at damage caps and their impact on Montana personal injury settlements and judgements.

Types of damages available in Montana

To understand damage caps, it’s important to first understand the types of damages available in Montana personal injury cases. In Montana, there are 3 main categories of damages:

Enjuris tip: To get a rough idea of how much your lawsuit is worth, take a look at our article about how settlement values are calculated.

Let’s take a closer look at each category.

In Montana, non-economic damages are generally not available in lawsuits for breach of contract. Tweet this

Punitive damages are intended to punish a defendant for their conduct and to deter others from engaging in similar conduct.

Damage caps in Montana are based on the type of damage, type of case, or type of defendant. Each damage cap in Montana is discussed below.

Damages must be reasonable

Though not a traditional “damage cap,” it’s important to point out that, in all cases, Montana requires damages to be “reasonable.” The court will prohibit any damage award that is “unconscionable” or “grossly oppressive.”

For example, Marcus was involved in a slip and fall accident in which he sustained minor cuts and bruises. He sued the owner of the store where he fell and the jury promptly awarded him $50 million in damages. In this hypothetical scenario, the court would likely prohibit the award of $50 million and reduce it to something more conscionable.

Again, punitive damages are intended to punish the defendant and are only awarded when the defendant has been found guilty of fraud or actual malice.

In Montana, punitive damages are capped at $10 million or 3% of a defendant’s net worth, whichever is less.

In Montana, punitive damages are capped at the lesser of $10 million or 3% of a defendant’s net worth. Tweet this

There is one caveat to the law, though. For class action lawsuits, there’s no limit to the amount of punitive damages that can be awarded.

Medical malpractice arises when the actions of a health care professional fall below the appropriate standard of care and the patient is injured as a result.

Breach of an obligation cases

In most cases, if a defendant breaches an obligation, the plaintiff can’t recover more in damages than the plaintiff would have received for the full performance of the obligation.

For example, if John agrees to purchase Wendy’s car for $500 and later backs out of the deal, Wendy can’t receive more than $500 in damages.

In Montana, if an alcohol vendor serves alcohol to a “visibly intoxicated” person — or if the bartender (1) knew the person was underage, or (2) didn't take reasonable steps to determine their age (check ID) — and that person then injures another person, the vendor can be held liable for the injuries.

What’s more, these amounts are for ALL claims stemming from the incident, no matter how many people the intoxicated or underage person injuries.

For lawsuits against public entities or public employees, the public entity or employee can’t be held liable for an amount greater than $750,000 for each claim and $1.5 million for each occurrence.

For example, let’s say a police officer causes a massive car accident in which 5 separate drivers are injured. If all 5 drivers sue the police officer, the aggregate damages couldn’t exceed $1.5 million. Moreover, no single driver could receive more than $750,000.

What happens if both the plaintiff and defendant are at fault?

A good attorney can place an accurate value on your case and help you negotiate, based on that value, a fair settlement — or take your case to trial if necessary. Consider using our free online directory to locate a Montana personal injury attorney in your area.