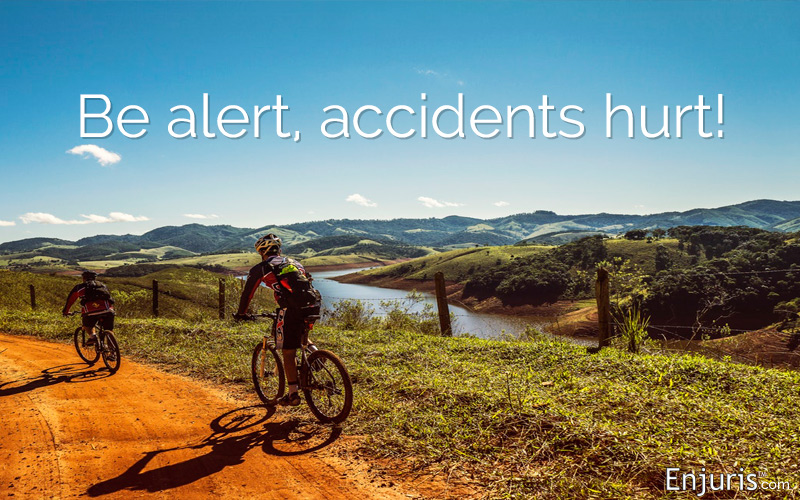 Table of Contents + show
Learn the reasons for and the consequences of a bike-vehicle collision in Big Sky Country
Bicycle statistics
Montana bicycle laws
Bicycle accidents with negligent drivers
Accidents where the bicyclist is at fault
Safety tips on how to prevent bike accidents
What to do after a bicycle-vehicle crash
Learn the causes of bike accidents, the laws that impact bicyclists, and how fault is determined in a bike crash.

Montana was recently ranked one of the 5 least bike-friendly states in the country by the League of American Bicyclists.

While this is a problem for bike lovers in Montana, the lack of infrastructure and harsh winter weather might partly explain why there are fewer bicyclists in Big Sky Country — and why there are fewer injuries than in other states that do a better job of encouraging people to trade in their cars for bikes.

Though relatively infrequent compared to most states, bike accidents do still occur in Montana. This article takes a look at bicycle accident statistics, the laws that govern bicycling in Montana, and what to do if you’re involved in a bicycle accident.

An estimated 47.5 million people ride bikes in the United States. According to the National Highway Traffic Safety Administration, more than 2 people are killed on a bicycle every day across the United States.

In The News: The Montana Department of Transportation (MDT) is developing the state’s first Pedestrian and Bicycle Plan with the goal of improving the quality and safety of biking and walking in the state.

In Montana, an average of 1 person is killed on a bicycle every year. In 2017, 18 people were “severely injured” while riding bicycles in Montana.

Like all states in the country, Montana requires road cyclists to follow the same rules and regulations as motor vehicles. This means, for example, that bicyclists are required to stop for traffic lights and stop signs.

Montana’s bicycle-specific laws are outlined in Title 61 of the Montana Code Annotated. The laws are summarized below:

Accidents where the bicyclist is at fault

Not all bicycle accidents are caused by motor vehicle drivers. A bicyclist can be found negligent for causing an accident as well.

If the bicyclists percentage of fault is 51% or more, the bicyclist is completely barred from recovering any damages from the defendant.

You’re riding your bike at night without a red light or reflector. At the same time, a man is driving his truck behind you and texting his wife. You slow down for a stop sign and the driver rear ends you. As a result, you’re thrown off your bike and suffer severe back and neck injuries costing an estimated $50,000. At trial, the jury finds that you were 20% at fault for the accident for failing to have proper lights on your bike, and the driver was 80% at fault for texting behind the wheel. Under Montana’s comparative fault rule, you would only be allowed to recover 80% of your total damages (or $40,000).

Safety tips on how to prevent bike accidents

The best way to avoid a serious injury and lengthy insurance claim or lawsuit is to take the necessary steps to avoid an accident in the first place. Here are some things to keep in mind when taking your bike for a spin:

Bike helmets can reduce the risk of serious head injuries by 88% if worn and fitted properly, according to @NHTSAgov Tweet this

What to do after a bicycle-vehicle crash

Whether you’re driving a car, truck, motorcycle or a bike, there are a few things you should do following a bicycle accident:

A bike accident can be a physically and emotionally traumatic event. The last thing you want to do after an accident is spend your time dealing with a lengthy insurance or legal claim. Use our free online directory to locate an attorney in your area to work on your claim so that you can focus on the process of healing and recovery.