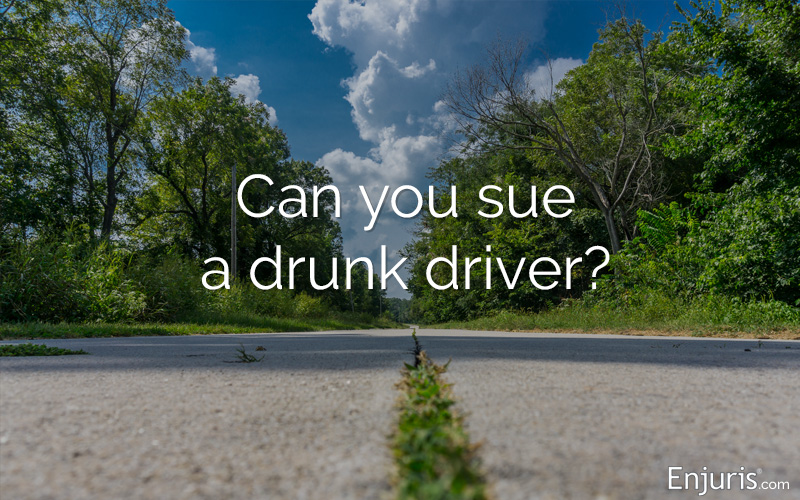 Table of Contents + show
Learn how to recover damages after a drunk driving accident in the Show-Me State
What is the legal alcohol limit for drivers in Missouri?
Can I be convicted of a DWI charge if my BAC is below the legal limit in Missouri?
Do I have to consent to a BAC test or a field sobriety test?
What are the penalties for driving while intoxicated in Missouri?
How does a DWI impact a personal injury lawsuit?
Can I sue the establishment that served the drunk driver who hit me?
How can I spot a drunk driver?
Alcohol use contributes to almost 10,000 crashes every year in Missouri, according to the Missouri State Highway Patrol Statistical Analysis Center. Let’s take a look at drunk driving laws and your civil recovery options.

Roughly 25% of all fatal accidents in Missouri are caused by intoxicated drivers.

There are 3.9 alcohol-impaired driving fatalities per 100,000 people in Missouri, more than the national average of 3.2.

What is the legal alcohol limit for drivers in Missouri?

Missouri's drunk driving laws can be found in Chapter 577 of the Missouri Revised Statutes.

Under Missouri Revised Statute § 577.012, you can be convicted of driving while intoxicated (DWI) without any additional evidence if your blood alcohol concentration (BAC) reaches 0.08%. This is called a “per se DWI.”

For 2 specific groups of people, the legal alcohol limit is even lower:

Can I be convicted of a DWI charge if my BAC is below the legal limit in Missouri?

You can be charged with a DWI if you operate a vehicle while in an “intoxicated condition.” This is called an “impairment DWI.”

To establish an impairment DWI, the prosecution has to prove the following elements:

Evidence that may be used to support a decision that a person is affected by alcohol or drugs may include:

In State of Missouri v. Robert Meanor, the state argued that the defendant was operating his vehicle in an intoxicated condition even though his BAC was under the legal limit (.02%).

The evidence the state presented to support their argument included the following:

The Missouri Supreme Court agreed with the state, ruling that the driver’s intoxicated condition was “clearly inferable from the circumstantial evidence in the case.”

Do I have to consent to a BAC test or a field sobriety test?

Missouri’s implied consent law requires anyone who operates a vehicle to submit to a sobriety test if stopped by a law enforcement officer who has reasonable grounds to believe the person has been driving while under the influence of alcohol or drugs.

If the person refuses to submit to a test, their license will automatically be suspended for 1 year (even if the charge is later thrown out) and evidence of their refusal can be used against them in a criminal trial.

What are the penalties for driving while intoxicated in Missouri?

The penalties for driving under the influence in Missouri depend on whether you’ve previously been convicted of a DWI:

In addition to the penalties above, points are added to a person’s Missouri driving record for any intoxication-related conviction.

How does a DWI impact a personal injury lawsuit?

If you suffer property damage or are injured in an accident caused by an intoxicated driver, you can file an insurance claim as you would in any other car accident.

Enjuris tip:Keep in mind that you’ll need to prove the intoxicated driver caused the accident in order to recover damages. The intoxicated driver will not automatically be considered liable just because of their intoxication. If liability is contested, you may need to hire a personal injury attorney to help develop and prove your case.

Can I sue the establishment that served the drunk driver who hit me?

Enjuris tip:A “dram” is an informal name for a small amount of hard liquor.

Missouri’s dram shop law can be found in Missouri Revised Statute § 537.053. The law, which is stricter than the dram shop laws in most states, says that an establishment will be liable for damages caused by an intoxicated patron if it can be proven by clear and convincing evidence that:

The term “visibly intoxicated” means a person who is “inebriated to such an extent that the impairment is shown by significantly uncoordinated physical action or significant physical dysfunction.”

How can I spot a drunk driver?

The best way to avoid a drunk driving accident is to avoid drunk drivers. Mothers Against Drunk Driving (MADD) lists these tips for how to spot a car operated by an intoxicated driver:

Are you ready to talk to an attorney about your drunk driving accident? Find an experienced Missouri car crash attorney using our free online legal directory.