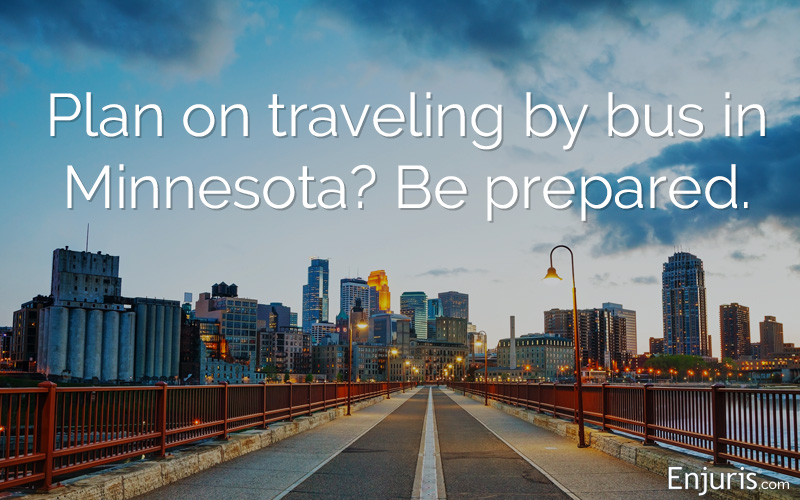 How to recover damages after a Minnesota bus crash

Minnesotans understand the benefits of traveling by bus better than most.

Although buses are generally safer than cars, accidents do still happen. At Enjuris, we believe knowledge is power. With that in mind, let’s take a look at Minnesota bus accidents, including the legal options available to passengers and drivers involved in a Minnesota bus crash.

In this article, the term “bus” refers to large public and private vehicles that transport passengers for a fee. In Minnesota, buses include:

How common are bus accidents?

There are a number of reasons why buses are involved in fewer accidents than other motor vehicles.

A study published in the Journal of Urban Health concluded that taking a bus is safer than traveling by car because bus drivers are professionally trained and tend to drive slower and more predictably than cars. On top of that, buses are bigger and more visible than cars.

When bus accidents do occur, they happen for many of the same reasons that car accidents take place.

A bus is more likely than a car to be involved in a rollover accident due to its high center of gravity.

Real Life Example:On an afternoon in February 2008, a school bus carrying 28 children from Lakeview Public Schools was traveling southbound on Highway 23 near Cottonwood, in southwestern Minnesota, when a minivan, driven by Olga Franco del Cid, drove through a stop sign at 50 miles per hour and collided with the school bus.

The collision caused the school bus to rotate clockwise and come to a stop stretched across Highway 23, where it was then struck by a Chevy Silverado truck traveling northbound.

As a result of the impacts, 17 children were injured and 4 were killed.

How do I recover damages after a bus accident in Minnesota?

Your legal options for recovering damages after a bus accident depends on whether, at the time of the accident, you were:

Let’s take a look at all 3 scenarios.

1. Recovering damages if you were a bus passenger at the time of the crash

If you were a bus passenger at the time of the crash, you can file an insurance claim or personal injury lawsuit against the party responsible for the crash.

In most cases, you’ll prove liability by establishing the elements of negligence:

Although most personal injury lawsuits filed by bus passengers are due to injuries that result from crashes, it’s also possible to be injured (or even killed) by another passenger. If you’re assaulted by a passenger, you may be able to sue the perpetrator and the bus driver so long as the driver knew or should have known about the potential assault and failed to do anything to stop it.

2. Recovering damages if you were a bus driver at the time of the crash

A bus driver who is injured on the job may be able to file a workers’ compensation claim.

Workers’ compensation is a form of insurance that pays medical expenses and lost wages to employees who are injured in the course of their job.

Unlike personal injury lawsuits, there’s no need for a bus driver to prove that anyone’s negligence caused the crash. Rather, the bus driver must simply prove that they were injured while performing their job duties.

3. Recovering damages if you were an occupant of another vehicle at the time of the bus crash

If you’re injured as an occupant of another vehicle in an accident caused by a bus, you can file an insurance claim against the bus driver’s insurance company or a personal injury lawsuit against the bus company. Bus companies are liable for the actions of their employees under the doctrine of respondeat superior.

Perhaps the biggest hoop you have to jump through when suing the government is providing the appropriate governmental agency with written notice of your claim within 180 days of the accident. Failing to provide proper notice could result in the loss of your right to file a lawsuit.

Enjuris tip:Minnesota is a modified comparative fault state, which means that a plaintiff’s damages are reduced by their percentage of fault. What’s more, if a plaintiff is more than 50% at fault for an accident, their recovery is completely barred.

Minnesota limits the amount of time bus accident victims have to file a personal injury lawsuit. This time limit is called the statute of limitations.

In most personal injury cases in Minnesota (including car and bus accidents), victims have 2 years from the date of the accident to file a lawsuit.

If you fail to file your lawsuit within this time period, your case will be forever barred (with a few narrow exceptions).

Enjuris tip:To preserve your legal rights, particularly if you may need to sue the government, it’s a good idea to meet with a personal injury attorney as soon as possible after a bus accident.

When to call a Minnesota bus accident lawyer

Bus accidents are typically more complicated than car accidents. Often, there are multiple injured parties, multiple defendants, and multiple insurance companies involved. What’s more, a governmental agency might be one of the defendants.

To find an experienced Minnesota personal injury attorney, use our free online directory.