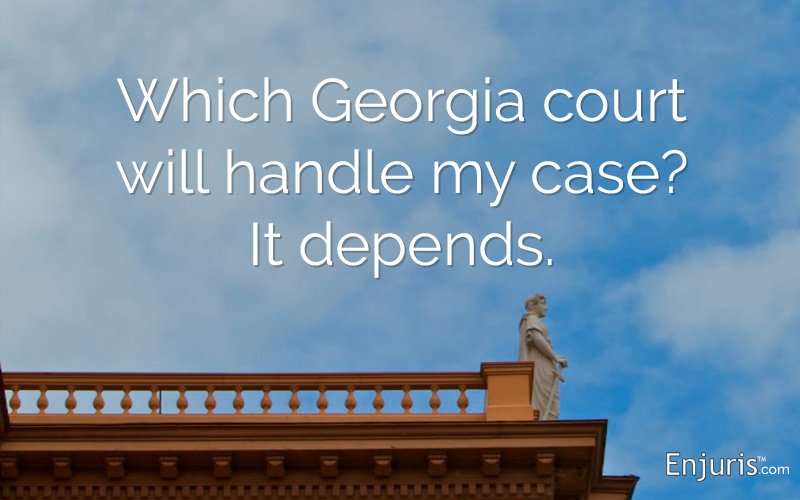 Follow a personal injury case through the legal system in Georgia

While the civil court system in Georgia isn’t overly complicated, it can still seem overwhelming when you're trying to start a case. Read on to understand what happens to your lawsuit upon filing and where it will likely go before settlement or resolution.

Georgia is an at-fault state, meaning people who get injured in an accident are expected to turn to insurance companies first for compensation, not to the courts. This law helps streamline the legal system and keeps common cases from clogging up judicial resources.

For example, if you get into a car accident with another driver, you must first notify your insurance company and seek compensation for damages. Depending on what’s covered under your auto insurance policy and how severe the injuries are, reimbursement from the insurance company may be sufficient.

Let’s say, however, that your injuries were especially grievous. Insurance policies aren’t going to cut it, and someone else is clearly at fault. Your case could join the approximately 5% of personal injury cases that end up going to trial. Perhaps your lawyer filed a lawsuit while settlement negotiations were in process so you could satisfy the statute of limitations. Whatever the reason, now your case is in the court system.

At this point, you might be wondering where your case is going. From a plaintiff’s perspective, a lawsuit comes to life every few months as deadlines are hit, during which time your attorney and the defendant’s lawyer will debate in front of a judge.

Note: If you haven’t found an attorney yet, consider our directory and review this list of questions to ask before hiring anyone:

Each side will argue motions (such as motions to exclude evidence or motions to dismiss, among others), and you’ll be sitting there quietly, wondering what’s really going on during this process.

When the other side refuses to settle, you can take them to trial to pursue compensation for personal injuries. Tweet this

There are five classes of trial-level courts in Georgia:

In addition to those five classes there are 350 municipal courts operating on a local level, as well as two appellate-level courts: the Court of Appeals (the court of first review) and the state Supreme Court (court of last review for the state that also handles issues of constitutionality). The Georgia Supreme Court is the highest court in the state.

What happens to my personal injury lawsuit?

As the answer to many legal questions goes: it depends. For starters, the answer to which court will take your case depends on how much your case is worth. If it’s less than $15,000, you would likely be heard by a magistrate judge and represent yourself. If your claim is worth more, your lawsuit will enter the superior court system.

Your lawsuit will most likely have to be filed in the county where the accident took place. Personal injury law is based on state statutes, which means that state courts take precedence.

What happens to your personal injury lawsuit when it enters the Georgia court system? Tweet this

Once your lawsuit is in the system, it will be given a docket number. This allows you to look up the docket online and keep track of everything in one place.

First, your attorney will serve a complaint on the defendant. This document describes the accident and your injuries in detail, which is supported with copies of your medical bills and invoices for damages. At the end of the complaint, your demand for compensation will be clearly laid out. Sometimes a payment demand letter is enough to jolt a reluctant defendant into action; other times they will refuse to settle, forcing you to bring them to court.

The next step is discovery. Both sides request information and ask questions of the other to figure out what happened during the accident. You might need to supplement these queries with motions to the judge, such as a motion to compel discovery.

Discovery will include depositions (under-oath questioning by opposing counsel that is transcribed by a court reporter for use during trial) or an independent medical examination (IME) by a “neutral” doctor. This IME can be used to impeach your testimony later on.

If you can’t reach an agreement, the judge might request that you try arbitration or mediation, both of which are known as “alternative dispute resolution.” A mediator serves as a go-between in difficult discussions; an arbitrator acts more as a judge and hands down a decision.

At any point during this process, the defendant could choose to settle or enter into negotiations with the plaintiff — at which point further legal court proceedings may be unnecessary.

Going to trial in Georgia - how it works

If none of the above methods works, however, and a settlement cannot be reached, then your case will proceed through discovery until the judge sets a trial date. Evidence is presented by both attorneys, and you’ll likely be called in to testify.

At this stage, questions are asked, witnesses are presented, and both lawyers will argue their respective positions to a judge (a bench trial) or jury (a jury trial). Bench trials are preferable when cases are complex and involve intricate legal theories, whereas jury trials are a good choice when the facts are straightforward and easy to convey.

After both attorneys conduct closing arguments, either the judge or jury will weigh the facts and deliberate before providing a verdict. Should one or both parties not be satisfied with the result, there is always the choice to appeal, which puts the case into the next highest court, the Court of Appeals. The appellate panel will review the case for legal inconsistencies or misapplication of law.

Should the parties still not be satisfied (and should the appellate court not be unanimous in its decision, which is binding), they can try for the Supreme Court of Georgia — but don’t expect another jury trial. Supreme Courts operate on the basis that all findings of fact have been completed at a lower level, and as such they don’t have to present cases to a jury. The Justices interpret how the law is applied, hear constitutional issues, and decide on death penalty cases.

Enjuris tip: If your lawsuit goes through appeals in Georgia, don’t expect another jury trial — higher courts are reviewers of law, not fact.

If you still need help or want to talk to someone familiar with Georgia law, check out the Enjuris law firm directory to find someone near you.