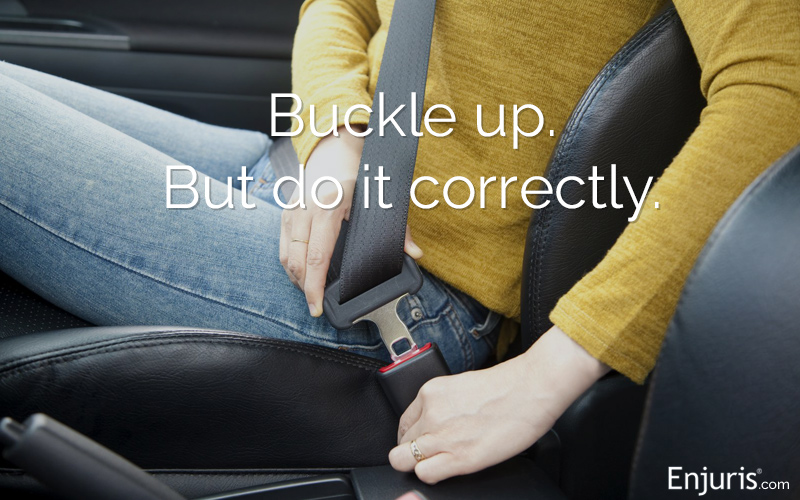 Yes, seat belts generally keep you safe... but what if it actually causes you harm?

There’s no question that seat belts save lives.

The National Highway Traffic Safety Administration (NHTSA) says that “[o]ne of the safest choices drivers and passengers can make is to buckle up.”

The NHTSA estimates that nearly 15,000 lives were saved by seat belts in a recent year, and that more than 2,500 others would have been saved if those victims had been buckled.

But nothing is perfect, and there are rare instances when your seat belt could actually cause an injury. This fact shouldn’t give you pause when considering whether to wear a seat belt. A seat belt injury could happen, but wouldn’t you rather be injured than dead?

Some seat belt injuries happen because of the accident itself. Others are because the wearer didn’t have the seat belt positioned or fastened correctly. Still others are because of a defect in the vehicle or seat belt. If a seat belt is defective and you are hurt as a result, then you might need to file a lawsuit in order to receive compensation to cover the costs of your injuries.

New York was the first state to pass a law requiring seat belts for drivers and most passengers. Over the past several decades since that law passed in 1984, nearly every state has passed a seat belt law.

There are some variations, though. States have different laws for who needs to wear a seat belt, either because of position in the car (back seat vs. front passenger seat) or age. There are also states that have primary enforcement whereas some have secondary enforcement.

New Hampshire is the only state where there is no enforcement of seat belt laws for adults (only for minors). Tweet this

You can’t predict how an accident might happen or affect you, but these are the most common types of seat belt injuries:

A quick contact like a pull or tug against a seat belt could allow the friction from the belt or your clothing to result in scrapes or cuts. You could have an imprint on your body from the belt.

While most scrapes or cuts will heal on their own, you should seek treatment for a serious open wound in order to prevent infection.

Your shoulder includes soft tissue that can become injured. The accident’s force can tear tendons and muscle fibers in the shoulder, particularly as it makes impact against the seat belt.

The force of a seat belt as it restrains your movement (as it’s designed to do) can have enough power to fracture or bruise your ribs. If you are in pain around the area of your ribs, seek immediate medical treatment. If your rib injury includes a bone dislocation, it could puncture or cause other damage to your lungs or heart.

Soft tissue injuries of the abdomen

The majority of your organs are housed in the abdominal region. Pressure from a seat belt on your abdomen could result in injuries to one or more of these organs, and it might not be immediately obvious. If you experience abdominal pain after an accident, it’s important to seek medical treatment right away.

Common internal injuries can include bowel or mesenteric injuries and fractures of the lumbar spine, along with liver, spleen, pancreas, or kidney injuries.

The sternum is the bone in the middle of your chest that attaches to your ribs. Your chest or sternum is usually a direct point of contact with a seat belt. Because your sternum is near the heart and lungs, an injury affecting the sternum could also affect those other very important organs.

A seat belt transmits physical force because it acts as a fulcrum. The point of contact for your body with the seat belt remains fixed in a single location, and the areas above and below can move forward in an accident.

There’s a wide range of treatments that can be applied to seat belt injuries, depending on the severity of the injury.

If the patient has vascular, viscus, or spinal injuries, they will be admitted to a hospital or trauma center. Injuries to ribs, sternum, and soft tissues could be treated through outpatient procedures and medication management for pain.

Reduce your risk of injury by wearing your seat belt properly

Enjuris tip:Remember that rules and safety for children in cars differs from adult guidance. Be sure to check your state laws with respect to child safety seats, along with the manufacturer’s specifications for your specific vehicle and child safety seat.

Generally, the cause of the injury is the accident. The person who caused the collision is usually liable for damages resulting from the accident. Damages are any financial costs related to the accident.

Sometimes there are other liable parties, however.

For instance, if your injuries are caused by a seat belt that didn’t work as intended by the manufacturer (a defect), you might need to pursue a  product liability lawsuit against the belt or car manufacturer, rather than the other driver.

When can you sue for a seat belt injury?

Any personal injury lawsuit has 2 (or more) parties:

The plaintiff is the injured person and the defendant is the person or entity that caused the injury.

The plaintiff needs to prove that the defendant was negligent and that the negligence caused their injury.

After a car accident, one of the first questions asked is who’s at fault. Whether or not you or another driver caused the accident, there could be defects in the seat belt system that affect how you’re compensated for injuries.

However, which driver caused the accident might not be the full extent of liability.

You might have a seat belt lawsuit related to one of these legal issues:

A seat belt could have a defective latch or tension detector, or another problem that would result in its not performing as expected.

If you were wearing your seat belt properly and it failed because either it detached or didn’t tighten during the impact in order to keep you restrained, this failure could cause you to be more seriously injured than you would have been had the seat belt worked as intended.

If your car was totaled, it’s important to have it inspected immediately. Once the car is out of your legal ownership, destroyed, or impounded, you can no longer have it inspected for evidence of seat belt failure.

Some vehicles have certain positions that have only a lap belt without a shoulder strap, such as in a middle backseat. Plaintiffs in insufficient seat belt lawsuits have previously claimed that the manufacturer made the passenger more susceptible to serious injury by not making a shoulder strap available.

If you suffer an injury from any defective product, there are 3 ways the manufacturer could be liable:

With respect to seat belts, it could be more difficult to identify a defendant. It’s likely that the car manufacturer is also the manufacturer of the relevant parts, but not always. It might source certain parts from other manufacturers, and that’s an important detail that your lawyer would need to determine.

Real Life Example: Sarah Milburn v. American Honda Motor Co. (2016)
Sarah Milburn was seated in the third-row middle seat of a 2011 Honda Odyssey minivan when the vehicle she was riding in was struck by another vehicle. Milburn suffered life-altering spinal injuries. She sued Honda, claiming that her injuries were the result of her not being safely restrained in the seat belt. A Honda Odyssey has a 2-part system including a lap belt and a shoulder strap that attaches to the ceiling of the vehicle, fastening across the passenger’s hips.

Milburn claimed that the design of the belt was defective and inadequate to protect a passenger in that seat of the vehicle. When the minivan rolled over upon colliding with another vehicle, Milburn’s lower body was not held to the seat with the lap belt. The shoulder belt effectively “hung” her, resulting in a cervical fracture and leaving her quadriplegic.

A Texas jury returned a $37.6 million verdict in Milburn’s favor.

The basic concept is that if the plaintiff contributed to their own injury, the amount of damages can be reduced. In other words, if you weren’t wearing the seat belt according to the manufacturer’s instructions, or if you altered the belt or mechanism in any way, you might not be able to hold the manufacturer responsible if the belt failed to protect you in a crash.

In a product liability lawsuit, this benefits the defendant if they can demonstrate that:

Enjuris tip:Find out how your state handles contributory negligence.

Consult a lawyer for a seat belt injury

There are 2 main reasons why you might need a lawyer for a seat belt injury:

Remember that an automotive manufacturer is an enormous corporation with deep pockets. It will deploy all of its resources to avoid a lawsuit, prevent bad publicity, and get out of spending money. At the same time, these massive corporations get sued every day and have teams of lawyers at their disposal to make the cases go away.

So where does that leave you?

It could leave you stuck with the bills for your medical treatment, unable to earn an income if your injury left you unable to work. Or you could even be facing expenses related to a life-long disability.

When you’re ready, the Enjuris law firm directory is a free resource for finding a lawyer near you who is ready to handle your claim and help you receive the compensation you need to cover your accident’s expenses and move forward.