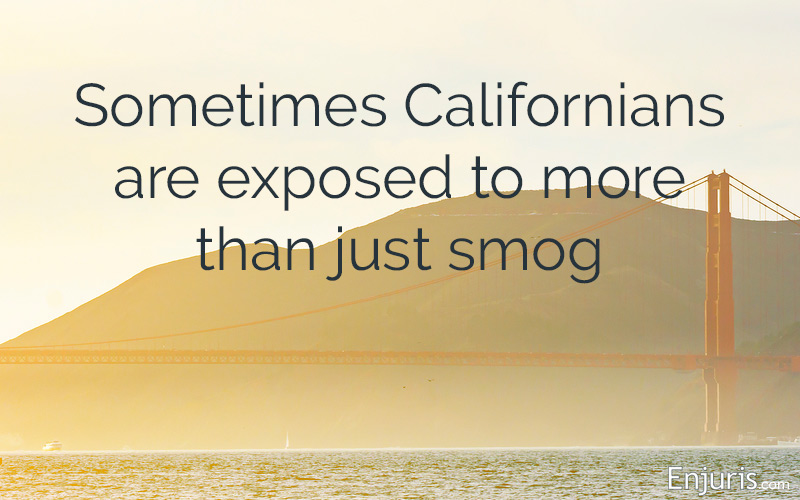 Receiving compensation after being exposed to a toxic substance

A “toxic tort” is a legal claim for an injury caused by exposure to a dangerous substance.

Toxic tort cases are particularly complicated because the impact of the exposure isn’t always immediately understood. Often, it takes years before a person realizes they were harmed by a dangerous substance.

California has been home to more than its fair share of catastrophic toxic tort cases, including lawsuits stemming from a chemical release at the Unocal Refinery in Rodeo, the discharge of sulfuric acid mist from a railcar in Richmond, the dumping of 19,000 gallons of toxic pesticides into the Sacramento River, and the release of a carcinogenic chemical in the Hinley water supply.

Despite (or perhaps because of) these massive lawsuits, California is also known for the radical steps it has taken recently to make consumers aware of toxic chemicals in their products.

Toxic tort claims can arise in a host of situations. Here are the 4 most common situations:

Real life example: In California, 624 Lockheed Martin workers recovered damages after filing a lawsuit in Los Angeles on the basis that workers were unwillingly exposed to toxic chemicals found in solvents, resins, and adhesives used to build Stealth bombers and other planes.
Real life example: Roundup lawsuit: A California jury awarded $2 billion in damages to a California couple who developed cancer as a result of using the popular weed-killer Roundup.

If you’ve suffered an injury as a result of your exposure to a toxic substance, there are 4 legal theories that you may be able to use to recover damages.

To establish a negligence claim in California, you have to prove that:

For example, let’s say that you’re a maintenance worker and your company forced you to use products containing asbestos for 30 years without proper protective gear.

In this situation, your company, which owed you a duty to provide you with a reasonably safe work environment, breached that duty by failing to provide you with the necessary safety equipment. So long as you can provide proof that the exposure to asbestos caused your injury, you will have successfully initiated a negligence claim against your company.

For example, let’s say a company manufactures a weed killer that causes cancer in 1 out of every 5 people who use the weed killer. In this situation, the product is so dangerous that the company would be held strictly liable for any injuries that resulted from the product regardless of whether the company knew about the side effects.

Let’s say a company is aware that their product contains a substance that causes cancer, but the company fails to warn consumers about the danger. In this situation, a consumer who gets sick as a result may have an intentional misrepresentation or fraud claim against the company.

If you’re harmed by a toxic substance while on the job, you can file a workers’ compensation claim.

If you live in California (or even if you don’t), then you might have heard about Proposition 65 (also known as the Safe Drinking Water and Toxic Enforcement Act of 1986).

Proposition 65 doesn’t ban the use of any specific toxic substances, but it does require several things intended to help Californians make informed decisions about their exposures to certain chemicals.

Just about anyone can file a lawsuit against a business for violating Proposition 65, including city and district attorneys, consumer advocacy groups, and private citizens and law firms.

How does Proposition 65 impact my toxic tort claim?

Penalties for violating Proposition 65 can be a fine of up to $2,500 per violation per day.

The biggest hurdle for any plaintiff in a toxic tort case is proving causation. No matter what legal theory you use, you must prove that the substance at issue caused your injury.

Practically speaking, this means that you must show that:

As you might imagine, toxic tort cases almost always feature dozens of expert witnesses. The defendant (i.e., the business) may choose to hire:

The plaintiff (or their attorney), on the other hand, can hire experts to prove just the opposite.

Enjuris tip: More than most personal injury lawsuits, toxic tort cases are complex and expensive. It’s important to hire an attorney with experience litigating toxic tort cases. Here are some questions to help you choose the right attorney for your case.

Who can be sued?

Figuring out who’s responsible for your illness can be difficult in a toxic tort case. As a result, attorneys generally sue everybody who had some link to the toxic substance.

Possible defendants in a toxic tort case include:

For most toxic tort cases, you have 2 years from the date of your injury to file a lawsuit. If you fail to do so, your case will be dismissed and you won’t be able to recover ANY damages.

There are a couple of exceptions to the 2-year statute of limitations. For example, if you’re suing a government entity, you must file an administrative claim within 6 months. If you are under the age of 18 at the time of the injury, then the statute of limitations won’t begin to run until you turn 18.

The best way to ensure you file your lawsuit in time is to seek out an experienced California attorney as soon as possible after the injury.

You may also be able to receive punitive damages, but only if the defendant’s conduct was particularly reprehensible.