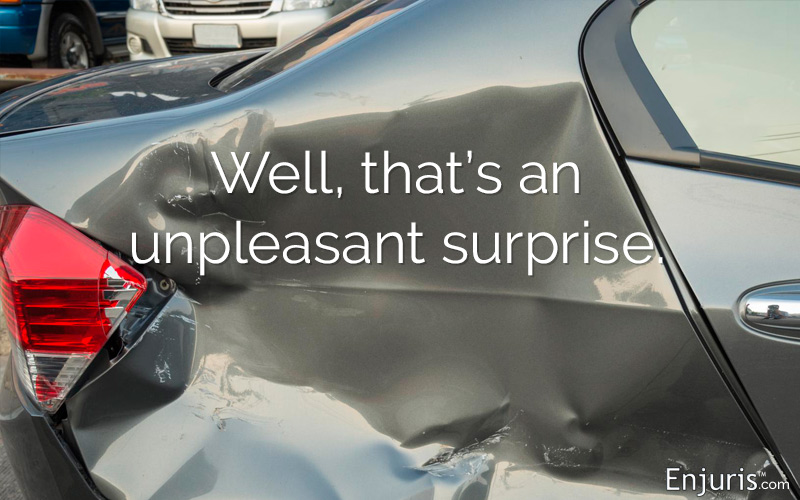 California has tough laws for hit and run accidents. See what the penalties are, how to avoid them, and what to do if you’re the victim.

What’s worse than another car that collides with yours?

A hit and run.

A person commits a hit and run when they:

California classifies hit and run crashes as either a misdemeanor or felony. The crash is a misdemeanor if it only causes property damage. If there’s an injury, it becomes a felony.

These categories stick, regardless of how serious or minor the accident is. In fact, they apply to every hit and run accident, regardless of who was at fault, the amount of damage, or the severity of injuries.

Enjuris tip:You might be involved in a minor accident and think it’s fine to leave, but it’s not.

These are considered hit and run accidents in California, and you could be charged accordingly. You’re better off sticking around to get a police report, turning over your insurance and contact information, and doing everything you’d normally do after an accident.

Avoid a hit and run charge in California (3 steps)

If you’re in an accident, you need to follow the law, even if you believe the accident is minor.

Here’s what to do:

In California, you’re required to get a police report if the damage is more than $750, or if there’s any injury — even a minor one. If you’ve ever taken your car for repair, you probably know that even a little dent in the bumper or scrape in the paint can add up to a big expense.

Likewise, an injury can take days or weeks for symptoms to develop. Even in a “minor” rear-end accident, the driver or passenger of either involved vehicle could discover whiplash or other pain that’s not immediately evident at the scene.

The bottom line is that no matter how small or insignificant the accident seems, always treat it as though it’s an accident with injuries and damage.

The best-case scenario is that the crash really is as minor as it seems — and that any repairs will be minimal cost and no one is injured.

The worst-case scenario is that there was more damage than you thought, or someone was injured. If that happens, you’re covered if you’ve followed the 3 steps to avoiding classification as a hit and run.

If you’re involved in a collision that damages any property, you have a duty to follow similar rules as you would if it were a road accident with another car.

Property damage could include:

If you crashed into something and caused damage, you must leave a clearly visible note that includes your identifying information and your version of what happened. You also must call the local police department and make a report.

There are circumstances when you might not realize you committed a hit and run—for example, if the impact was so minimal that you didn’t feel it, or if you hit an animal without realizing it. If you’re charged with misdemeanor hit and run, your lawyer could try the defense that you didn’t realize you’d caused damage.

Criminal penalties for a California hit and run

If you’re convicted of misdemeanor hit and run, you might face:

If you’re convicted of a felony hit and run, you could face:

In some circumstances, the prosecutor could charge a driver with both a misdemeanor and felony hit and run.

What about the other side of this equation?

You finish your shopping and return to the parking lot to find that your car was dented. There’s no note and no one witnessed the hit and run.

Leave your car where it is since it’s already safely in a parking spot. Return to the store and ask whether there is a security camera that might’ve captured the collision. It’s crucial that you do this immediately because often, security footage is only saved for a short period of time. If you were only in the store for an hour, you should easily be able to pin down the time frame that needs to be reviewed.

Whether there is or isn’t security video, your next move is to call the police. The police have ways of retrieving evidence from your car that you might not think of. If you see any physical evidence, like a piece of the other car’s body or the color of the paint scrape, point that out to the police. It might help to identify the hit and run driver.

You stop at a stop sign and another driver rear-ends you. It’s not a hard collision, but enough that you felt the impact and expect that your car was damaged.

But the driver swerves around you and speeds away without stopping.

First, see if your passengers require medical attention. Second, move your car out of traffic by pulling off to the side where it’s a safe place to stop.

If you can recall any details about the car that hit you, note them immediately before you forget. If there are any other drivers or observers at the scene who witnessed the hit and run, ask them for their contact information if you’re able to do so before they drive away.

You should gather the following details about the car if possible, such as:

Of course, if the driver sped off and you were already shocked from being hit, there’s a good chance you didn’t get any of these details. Either way, you need to call the police and get a report that details damage to your car, your injuries if you have them, and any other evidence they can acquire from the scene.

Making an insurance claim after a hit and run accident is similar to any other kind of car accident. You need to report the accident to your insurance company within 2 years in California. Of course, it’s better to do it far sooner than that.

If not, your collision coverage should cover damage to your car, but comprehensive coverage will not. If you carry MedPay (which is an optional, no-fault insurance that covers medical expenses), you can claim any injury-related expenses that way.

Enjuris tip: Collision and MedPay coverage aren’t required in California. If you only carry the minimum coverage, you might not be covered in a hit and run.

If the driver in a California hit and run isn’t identified, you’ll be responsible for paying the cost of your deductible, even though you’re not at fault. However, a hit and run claim can’t raise your insurance rates.

Here’s some more info about how to handle an insurance claim after a hit and run:

If your claim is small and you’re satisfied with what the insurance company offers for damages, you’re probably all set.

Start your search by browsing the Enjuris Personal Injury Law Firm Directory for a list of top-notch California attorneys who are experienced in every aspect of car accident and personal injury lawsuits.