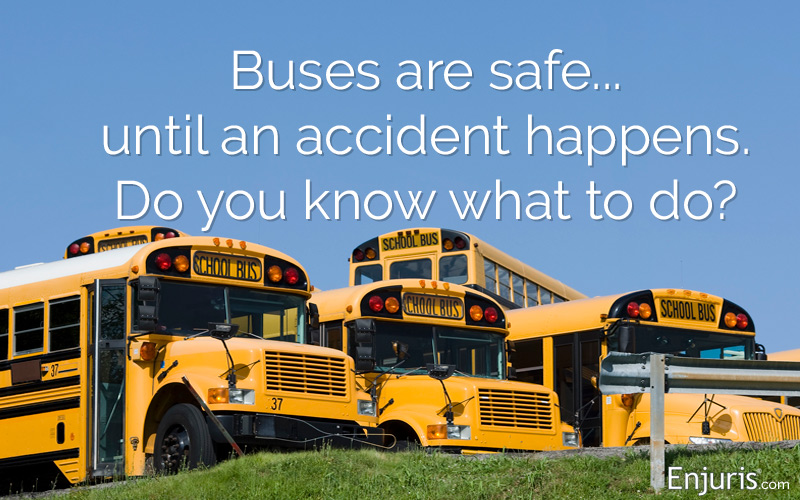 Different types of buses have different legal outcomes if you’re in an accident. Know what to do, what your time frame must be, and who can help.

When a bus is involved in an accident, it’s usually big news.

The main reason is that there’s the potential for a lot of people to be injured, and because bus accidents are fairly uncommon.

An estimated 5.3% of Californians commute to work by public transit, which is more than 2 million people based on California’s population of over 39.5 million. About 65.2% of people in this group use buses to commute to work. The other 34% of commuters ride heavy, light, or commuter rail systems, or other public transportation.1

About 1 in 8 students take a bus to school in California. That adds up to about 700,000 students, or 12%.2 In fact, California has the largest mass transportation system for schools in the country. There are more than 25,000 school buses in the state that provide about 3 million passenger rides each day. During the course of a year, California school buses travel more than 334 million miles and provide over a half billion passenger rides.3

Commuting and school aren’t the only reasons to take a bus. Many people use bus companies like Greyhound, Megabus, and Flixbus to travel throughout the state.

It’s inevitable that with so many buses on the road each day — between commuters, schoolchildren, tourists, and other bus riders — accidents are bound to happen.

Facing factsNationally, about 63,000 buses are involved in an accident each year. There are about 14,000 injuries and 325 fatalities.4

Most buses are included in one of the following categories:

Some bus accidents involve crashes with stationary objects or other vehicles. People can also be hurt getting on or off the bus, or by another driver that ignores the fact that the bus is stopped.

Although crashes can happen in a variety of ways, these are common causes of bus accidents:

A tour bus collided with a truck and sedan around 6:30 p.m. as it followed California Route 38 leading from the Big Bear area.

The charter bus was carrying 38 passengers, some of whom were children. The driver lost control of the vehicle as it was driving down the mountain, and the bus rolled over the truck, causing it to be crushed. The truck driver survived.

It took firefighters more than 2 hours to extricate the injured passengers, and 27 were sent to area hospitals. Ultimately, 8 people were killed in the crash and more than 30 were injured.

Gospel singer Josh Turner’s road crew was traveling by bus on Highway 46, about 78 miles north of Santa Maria, when the bus they were riding in crashed following a concert at Vina Robles Amphitheater in Paso Robles. The singer wasn’t on the bus at the time of the accident.

The bus veered off the road, drove 20 yards through vegetation, and hit a riverbed after it launched off an 80-foot cliff. One passenger died and 7 were injured.

A tour bus collided with the rear of a tractor trailer, resulting in the deaths of the bus driver and 12 passengers, and leaving dozens with injuries.

The bus had left the Red Earth Casino and was returning to Los Angeles at the time of the crash. The vehicle had passed recent inspections and showed no mechanical problems. However, the bus was traveling faster than the tractor trailer and the driver didn’t stop in time to avoid a crash.

We all want safer roads and fewer accidents.

If you’re a parent who puts your child on a school bus each morning, the prospect of a school bus crash is likely one of the scariest things you can imagine.

Facing factsThe National Highway Traffic Safety Administration (NHTSA) reported that 95 people were killed in school-bus related crashes in 2017 (the most recent year for which it has data). Of those, 6% were school bus passengers.5 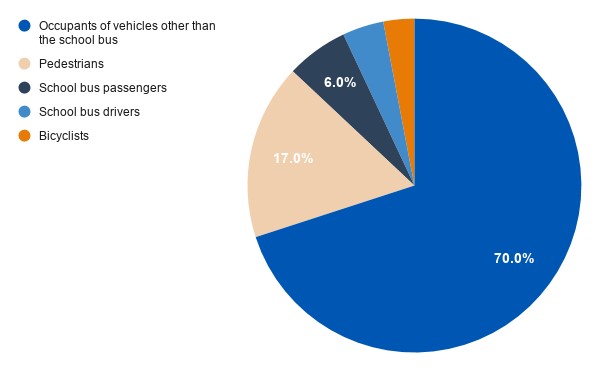 However, school buses remain one of the safest forms of transportation. One reason school buses are safer than cars or other buses is because they’re built for compartmentalization. Compartmentalization is the “protective envelope created by strong, closely-spaced seats that have energy-absorbing high seat backs that protect occupants in the event of a crash.”6

Currently, school buses are required to be equipped with a lap belt for each passenger, but the Department of Transportation is considering a proposal to require lap and shoulder belts that fit passengers from age 6 to adult.

But what if the bus driver caused the accident?

Things get a little more complex if that’s what happened. First, it depends on who owns and operates the bus.

The California Tort Claims Act (CTCA) requires that an injured person must provide notice of a claim to the responsible agency within 6 months. The agency can accept the claim or reject it. If it rejects your claim, you could then file a lawsuit.

You can file a claim under the CTCA for:

How to file a notice of claim in California

A notice of claim is similar to a demand letter.

Your notice of claim must include the following:

If you fail to include the required information in a notice of claim, you could lose your right to file a claim.

A claim against the government in California must be filed within 6 months for a personal injury, wrongful death, or damage to personal property.

There are some exceptions that permit late claims, such as if the claimant has died, is under the age of 18 for the 6-month period, or had mental or physical incapacity.

After your claim is filed, the government agency has 45 days to respond. The agency can:

If the government agency doesn’t respond within 45 days, the claim is rejected.

If you’re involved in an accident with a private or charter bus, either as a passenger or as the driver of another vehicle, you’ll want to know who owns the bus and was responsible for its operation.

You can file a claim against the owner or operator of the bus company, perhaps the driver, or even the manufacturer of the bus if the accident was the result of an equipment failure.

The California Public Utilities Commission has regulatory and safety oversight over private and charter buses (in other words, for-hire passenger carriers). A California personal injury lawyer can help determine liability based on whether the rules and regulations were being followed and if negligence was a factor.

As with any accident, your injuries from a California bus accident can range from mild to severe. You likely won’t receive a damage award for injuries like minor cuts or bruises if you didn’t receive medical treatment.

If you’re severely injured, you can receive damages for:

Enjuris tip: Punitive damages are usually not awarded in claims against the government.

What to do after a California bus accident

A bus accident isn’t as straightforward as a regular car accident. You might have several liable parties, and you could be dealing with large companies or government agencies.

A personal injury lawyer is the best, most well-informed person to help you navigate the complicated legal landscape if you need to file a claim against the government. Governments operate on tight budgets and don’t want to pay out claims unless they have no way out — but you deserve to be compensated for your losses if the accident was the fault of the driver or if the bus equipment was defective.

Regardless of how the accident happened, your lawyer will gather the evidence, request records, and investigate the claim in order to get what you need to move forward. You can start with the Enjuris Personal Injury Law Firm Directory to find a California lawyer who will help you pursue a claim following a bus accident.