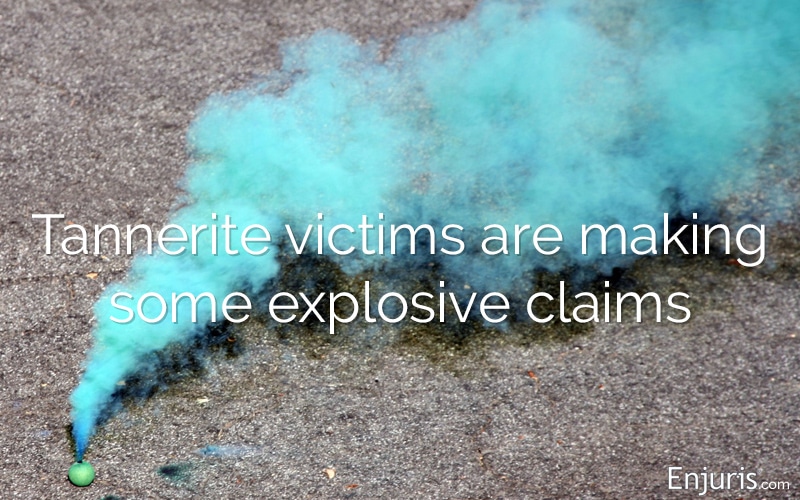 Tannerite, which is typically used as an explosive target for firearms practice, has been making the news for all of the wrong reasons lately.

In New Hampshire, a family used 80-pounds of Tannerite for a gender reveal party. The result was a massive explosion that cracked the foundations of surrounding homes.

Let’s take a closer look at what Tannerite is and why it’s increasingly the source of litigation.

Table of Contents + show
What is Tannerite?
Is Tannerite legal?
Tannerite accidents and lawsuits
Do you have a Tannerite explosion claim?

Tannerite is the brand name of an explosive made from ammonium nitrate, ammonium perchlorate, and powdered aluminum (ingredients that aren’t explosive on their own, but are explosive when combined).

Generic mixtures of ammonium nitrate and powdered aluminum are also typically referred to as “Tannerite,” the way the brand name “Band-Aid” is used to refer to all types of adhesive bandages.

Tannerite is intended to be used for target practice because it produces a loud bang and puff of smoke when struck with a bullet traveling at least 2,000 feet per second. However, when large amounts of the chemicals are combined, the result is a powerful explosion.

Facing facts:Tannerite is manufactured by Oregon-based Tannerite Sports, a company founded in 1996 by Daniel Jeremy Tanner.

Over the last few years, people have begun using Tannerite for purposes other than target practice, including:

Tannerite is legal and largely unregulated.

Tannerite is sold as a “mixing kit,” requiring the purchaser to mix the components of Tannerite together. Because the components are not explosive on their own, Tannerite is not considered an “explosive” as sold and, therefore, it’s not regulated by the Bureau of Alcohol, Tobacco, and Firearms (ATF).

"It comes with an oxidizer," said Sgt. Jeff Dade, of the New Hampshire State Police Bomb Squad. "The fuel is in a separate packet, and you mix it, and once mixed, you would place it somewhere safely out in a range where you would then shoot it."

There is a minor exception to the lack of regulation.

For certain prohibited persons, it’s illegal to possess explosive materials, including the individual components that make Tannerite. Prohibited persons include any person who:

Several states have proposed legislation to regulate the sale and distribution of Tannerite, including New York and Indiana. Thus far, Maryland and California are the only states to have successfully passed laws prohibiting Tannerite (and other explosive materials) from being purchased, used, or carried without an explosives license.

Tannerite and other companies that sell exploding targets have been sued on a number of occasions.

Here’s a look at a couple of representative lawsuits:

The District Attorney’s office for San Diego County and Riverside County sued Tannerite and the sides eventually reached a settlement.

Under the terms of the settlement, Tannerite is required to clearly state that its targets require a permit to possess in California because they’re considered “explosive and destructive devices.” The settlement also stipulated that the 2 San Diego residents who started the wildfire receive $50,000 reimbursement for the funds they paid to the BLM.

Real Life Example:When Jason Vantilburg found out he was going to be a father, he decided to have a diaper party. For the event’s grand finale, Jason decided to blow up an old refrigerator in front of his guests. To do so, he filled the refrigerator with H2 Targets’ exploding targets.

Jason yelled “fire in the hole” and pulled the trigger. The H2 inside the refrigerator immediately exploded. The explosion, given the quantity of H2 and the enclosed, unvented metal space in which it occurred, blew shrapnel across the yard. A piece of metal sliced through Jennifer Plank-Greer’s hand, cutting the bone and leaving four of her fingers dangling by the remaining skin.

Jennifer filed a lawsuit in the U.S District Court for the Northern District of Ohio alleging that H2 Targets' products were defective in design and that both the manufacturer and distributor failed to provide adequate instructions and warnings.

"It's a dangerous product and frankly, the foreseeable risks of this product far outweigh any benefit you could ever get from it," said Jennifer’s attorney. "The fact that someone was not fatally injured in this explosion is a miracle, really."

The sides ultimately settled the case.

Do you have a Tannerite explosion claim?

To file a lawsuit against Tannerite (or a similar company), you’ll need to prove that the product was defective in some way. There are 3 types of defects that can be cause for a product liability case:

The most common defenses raised by Tannerite and other companies that sell similar products are:

Do you have experience using Tannerite or a similar product?

Tell us about it in the comments below.