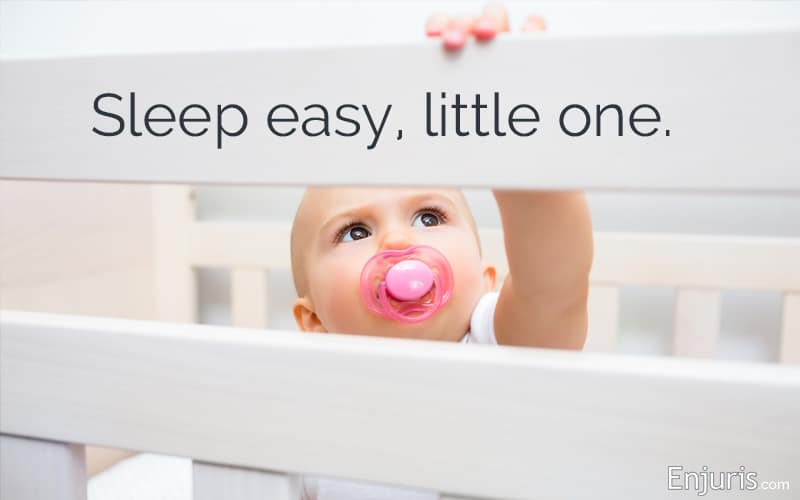 You're a parent even before your baby is born… especially when it comes to the parts of parenting that involve worrying about the what-ifs and trying to create a safe home environment for your child. You might spend your pregnancy thinking about what you eat, attending doctor appointments, and setting up a nursery for when your little bundle arrives.

But setting up a baby-friendly home isn't just about picking just the right shade of pastel for the nursery walls or installing child-safety locks on closets or drawers. It's also important to consider safety when choosing big items like car seats, high chairs, strollers, and cribs.

Many parents research the safest and most user-friendly baby products, and rightfully so — they're costly, you use them often, and sometimes your baby's life can depend on them. You don't want to skimp on safety.

So what happens when you've received and assembled a crib that costs several hundred dollars, only to learn that it's subject to a recall or safety warning?

That's what has happened to more than 11 million parents since 2005, when the U.S. Consumer Product Safety Commission (CPSC) recalled all cribs with drop-side detachments.

Facing facts:Between 2001 and 2010, drop-side cribs were blamed for the deaths of at least 32 infants.

A drop-side crib has a movable side that was popular because it can be raised when the baby is alone in the crib and lowered when the caregiver wants to reach in and lift the child out.

However, while drop-side cribs might be convenient for shorter-standing caregivers and those who have a harder time bending over to lift a squirming or heavy baby, they can also be deadly. The drop-side can have a gap in which the baby could get caught, which injures their head and neck, and can even be fatal.

The gaps between the drop-side and other parts of the crib happen because of:

Cribs are expensive, and most babies/toddlers only use them for 2 to 3 years, so naturally a parent wants to get as much use out of it as possible by using it for additional children. Many parents use swap sites like Craigslist or Facebook groups to purchase less expensive used cribs rather than buying a new one, but pre-owned cribs can come with problems.

Difference between a recall and a ban

A recall is issued by the CPSC when an item already on the market must not be used. If an item is recalled, there's usually information that directs the consumer to return it or receive a refund.

If an item is banned, it means manufacturers and retailers may no longer sell it in the U.S.

But what's clear is that every crib, regardless of manufacturer or style, that had a drop-side, was recalled.

Beginning in June 2011, cribs sold in the U.S. were required to meet a new set of federal requirements. The CPSC recommended that parents not attempt to repair a damaged crib (unless provided with specific parts and instructions by a manufacturer), but rather to purchase a new crib if their crib no longer met the regulations.

A crib bumper is the padding that is placed around the perimeter of a crib. They were designed so that a baby's arms or legs couldn't slip between crib slats, and also to provide a soft surface if a baby were to roll against the side of the crib while sleeping.

Although crib bumpers were once a “must-have” nursery accessory, appreciated for their usefulness as well as aesthetic value, it's now well-established that they can be very dangerous. Crib bumpers can be anything from soft cotton to “breathable” mesh, but experts say even the mesh bumpers are hazardous and that no crib bumpers should be used.

Even a breathable mesh crib bumper can pose a risk of entrapment or strangulation, and some older babies and toddlers use them to get a foothold to climb out of the crib, increasing the likelihood of falling.

Real Life Example:A class-action lawsuit was filed in 2019 against Pottery Barn and its parent company Williams-Sonoma because it continued to sell crib bumpers, despite numerous reports of injuries and deaths. Crib bumpers were subject to consumer warnings, bans in some states, and a Walmart lawsuit, but these retailers continued to sell them without warning parents that they create significant safety risks.

It's not just cribs!

Cribs aren't the only nursery equipment that can cause injuries.

The CPSC reported that in 2016, there were 62,300 injuries to children under age 5 that required emergency department treatment that were the result of the use of nursery products. (source)

Seventy percent of the total number of injuries were attributed to high chairs, cribs and crib mattresses, strollers and infant carriers. The leading cause of injury was falling, and the most common injuries were to the head and face. 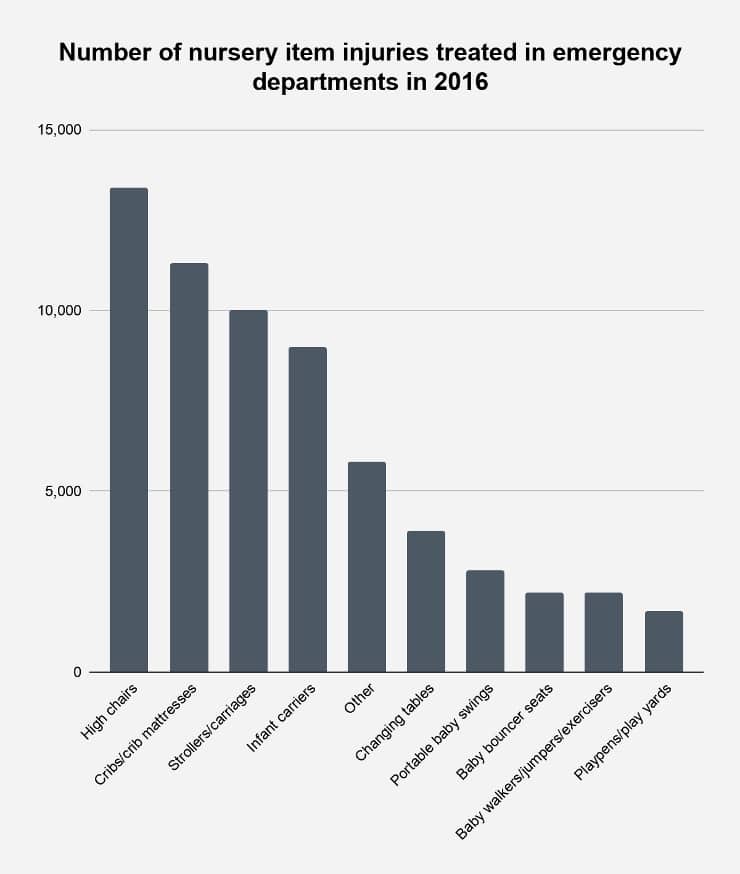 Many deaths associated with cribs, playpens, and play yards are blamed on soft bedding like blankets or pillows, or a too-soft mattress. Young babies don't have fully developed neck and upper body muscles to turn their heads if their nose and mouth are buried in fabric, like a pillow or blanket. They can suffocate if they're not able to turn their head to get air.

Sometimes, this includes improvised covers on play yards or crib bumpers. Often, deaths are not directly caused by a failure of a product, but by additional items or uses of the product that are different from manufacturer recommendations.

The American Academy of Pediatrics (AAP) recommends that you put your baby to sleep in a bare crib with only a properly fitting, firm mattress and a tightly fitted sheet. 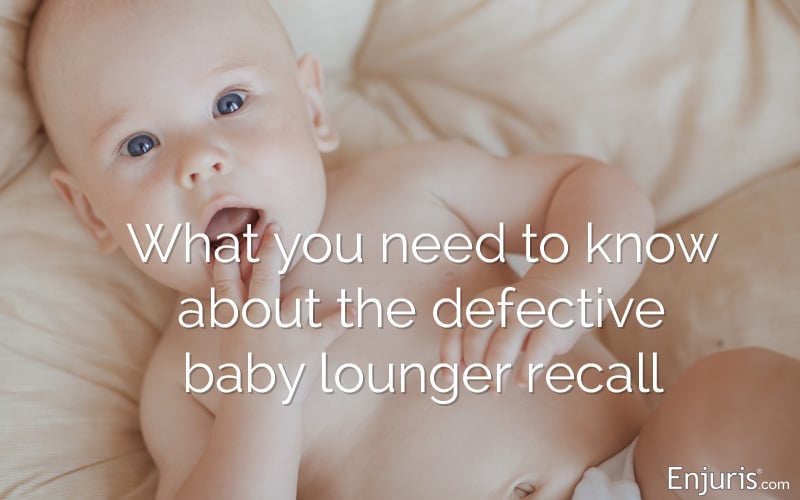 The federal Consumer Product Safety Commission began to investigate Boppy Newborn Lounger and similar products when deaths began to be reported in December 2015. Between that time and June 2020, there were 8 reported infant deaths after the babies suffocated when placed in the loungers on their backs, sides, or stomachs. Find out more

These recommendations are based on guidance from the American Academy of Pediatrics (AAP):

Enjuris tip:The AAP says certain products that claim to reduce the likelihood of SIDS have not been shown to be effective. Be cautious of claims when using wedges, positioners, or other special sleep surfaces or mattresses. Along the same lines, there's not enough research on bedside or in-bed sleepers to determine whether they have an effect on the risk of SIDS.

If your child was injured by a defective product, you might be considering legal action.

A product can be considered defective in 3 ways:

For example, a drop-side crib would be a design defect because this style of equipment is inherently unsafe. But if you have a stationary-side crib and one slat becomes loose, for instance, that might be a manufacturing defect.

If your child was injured by defective baby equipment, you should consult a personal injury attorney in your area to determine how to proceed, either with a lawsuit, to join a class action if there's already one that's applicable to your situation, or to file a complaint with the CPSC.

The free Enjuris law firm directory is your resource for finding a lawyer in your state who specializes in these types of product liability claims.