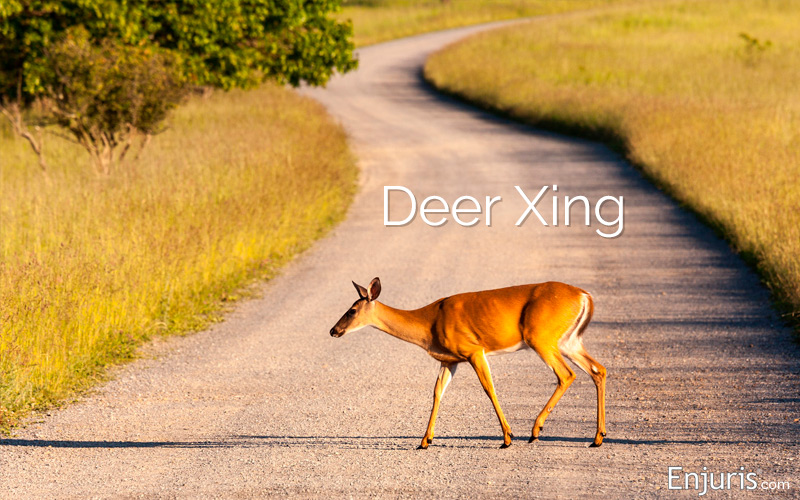 A thick fog rolls over a rural road in the early morning. A white-tailed deer bounds from the tall grass on one side of the road to a patch of buckweed on the other side.

This isn’t an uncommon sight for rural drivers, especially during deer-mating season, which runs from October to January.

Facing factsAccording to the Insurance Information Institute, there are roughly 1.6 million car accidents involving deer every year in the United States.

Though deer can be found throughout the country, deer-vehicle collisions are much more common in certain states.

Deer can live in a broad range of habitats, from woodlands and mountains to croplands and pastures. There are, however, 10 states where your odds of hitting a deer are particularly high.

What are the 3 worst states for deer-vehicle collisions? West Virginia, Montana, and Pennsylvania. Does your state rank in the top 10?  Tweet this

Deer see the world differently than humans. When light enters a deer’s eye, it passes over the lens and hits the retina. The light then bounces back to the front of the eye and reflects again back to the retina. As a consequence, deer have terrific night vision.

Unfortunately, this ability to take in lots of light is why bright headlights temporarily blind deer.

Here are some simple steps you can take to help avoid colliding with a deer:

Facing factsRoughly 77% of animals hit by cars are deer. The most common deer involved in collisions are mule deer and white-tailed deer. The chances of hitting a deer doubles in the fall.

What to do if you hit a deer

Even if you do everything you’re supposed to do, accidents still happen. According to the Insurance Information Institute, roughly 200 deaths are caused by deer-vehicle collisions every year. On top of that, deer collisions result in close to $4 billion in property damage every year.

If you hit a deer, try to remain calm. Pull over to the side of the road as soon as it’s safe to do so and turn on your hazard lights. Call emergency services if anyone’s injured or the local police if your vehicle is damaged.

While you may want to help the injured deer, it’s best to keep your distance. An injured deer can be confused and dangerous. Instead of approaching the deer, let emergency responders know about the injured deer.

Enjuris tip: If it’s safe to do so, snap a picture of the deer (as well as the scene of the accident and the damage to your vehicle). Photographs of the scene can help in the event that your version of events is disputed. But DO NOT approach the deer if it is still alive.

In most cases, you’ll simply contact your insurance company after a deer-vehicle collision. Most, but not all, car insurance policies cover damages caused by deer. However, if there were other vehicles involved in your accident (perhaps you swerved and struck another vehicle), you may need to contact an attorney to sort out liability issues.

Were you involved in an accident with a deer or other animal? Did you file an insurance claim or a personal injury lawsuit? Share your experience in the comments below.