Accident Help (Home) » Injury Blog » Who Is Responsible in a Self-Driving Car Accident? 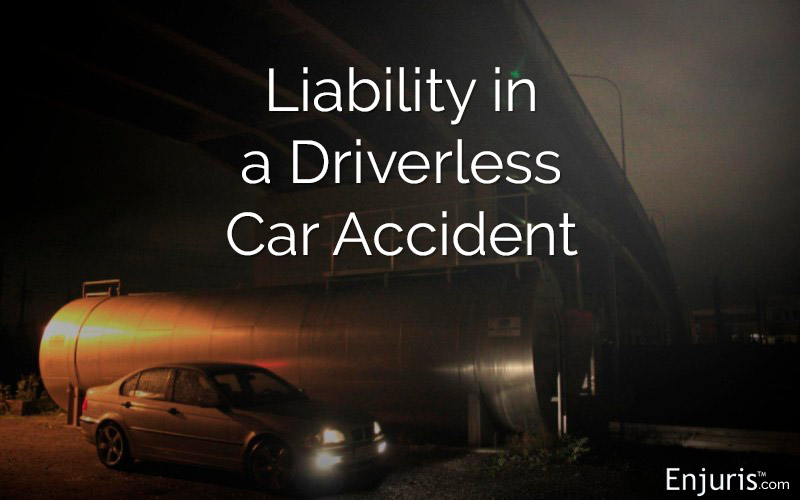 Table of Contents + show
Just because there’s no driver doesn’t mean there’s no court case
The political discussion around autonomous vehicles
When can I get a driverless car?

The idea of a self-driving car seems magical to many people, especially those who have been in car accidents before. Your hands are off the wheel; theoretically, you could drink your coffee, enjoy the paper or even take a nap while your vehicle dutifully carries you to work or to run errands.

The National Highway Traffic and Safety Administration (NHTSA) said that 94% of car accidents are because of human error. These included recognition errors (inattention, distraction, etc.), decision errors (like driving too fast), or performance errors (such as overcompensating for a turn or mistaking directions).

It’s estimated that autonomous vehicles could reduce that number by 90%.

Policymakers are still debating who is responsible when a self-driving car crashes, though. Just because human error could potentially be removed from the equation doesn’t mean responsibility is also somehow expunged. It’s just a matter of figuring out who should be liable in a self-driving car accident.

The political discussion around autonomous vehicles

There is no national consensus regarding liability when an AV (autonomous vehicle) crashes. This is likely because there are different levels of automation and the products are not yet widely available.

The NHTSA separates AV technology into five levels, though for some reason they started at “zero” and not “one”:

Some companies have predicted that the shift from normal cars to AVs will also result in a shift of liability from the driver to the manufacturer. This could make a national no-fault insurance preference more likely. Product liability suits against a manufacturer are lengthy and expensive. A no-fault system can take care of victims by providing quick compensation, and they don’t rely on the location of an at-fault party. Victims would simply turn to their own insurance carriers for help.

However, no-fault technically means “no responsibility.” This could lead to manufacturers and technology developers cutting corners and not putting their products through testing as much as they should, because they have no incentive to make sure it’s the safest design. This is where a strict liability product system is imperative, because dangerous products must be eliminated from the stream of commerce.

Implicit or explicit preemption – meaning blocking certain types of cases by law and thus limiting liability – is another option that is being tossed around. This would immunize self-driving car developers and manufacturers from certain lawsuits, as long as they follow minimum federal guidelines in formulating their products. By adhering to regulatory guidelines, they could streamline the more important cases and dismiss those that are preempted by law.

However, product liability law is able to adapt with the times. Just because AV cars are a new technology doesn’t mean they need their own special rules. Some experts feel that enacting implicit or explicit preemptions would discourage truly necessary litigation. Products liability law exists to hold corporations accountable for their actions. This would leave some plaintiffs immobilized in a self-driving car accident case.

Where some states stand

Nevada and California have already determined that the operator of an AV (the person sitting behind the controls or who “causes the technology to engage”) is responsible in the case of an accident. Most other states haven’t said anything on the topic yet. Nevada and Florida, however, have stated that self-driving vehicle manufacturers are immune from any liability for aftermarket adaptation that turns a regular vehicle into a driverless car. All three states require that manufacturers carry $5 million in liability insurance.

Ah, tort reform… the greatest buzzwords of any election season. Some reformers believe that reclassifying driverless vehicles as a service rather than a product could help this murky situation. By not applying the civil justice system’s protections to self-driving cars, contract law could step in to limit liability and control how these products are used.

When can I get a driverless car?

Only level 3 cars are available to the public at the moment, meaning they have a few autonomous functions that are available under specific conditions. Some of these functions include automatic brakes, cruise control (which has been available for decades) and lane-drifting technologies. True self-driving vehicles are currently being developed and won’t be available for at least a few years.

Many people are resisting the idea of a car assuming control, though the benefits far outweigh the risks: increased safety, fewer accidents, the ability for disabled people to transport themselves, better road efficiency, less traffic – there’s even the economic benefit because there will be so many fewer accidents. Lost productivity because of car accidents is in the billions each year.

Wouldn’t it be better just to sit back, take a breath and let your car drive you around? It’d be a lot less road rage, that’s for sure.