Accident Help (Home) » Injury Blog » Why Is My Lawyer Ignoring Me? 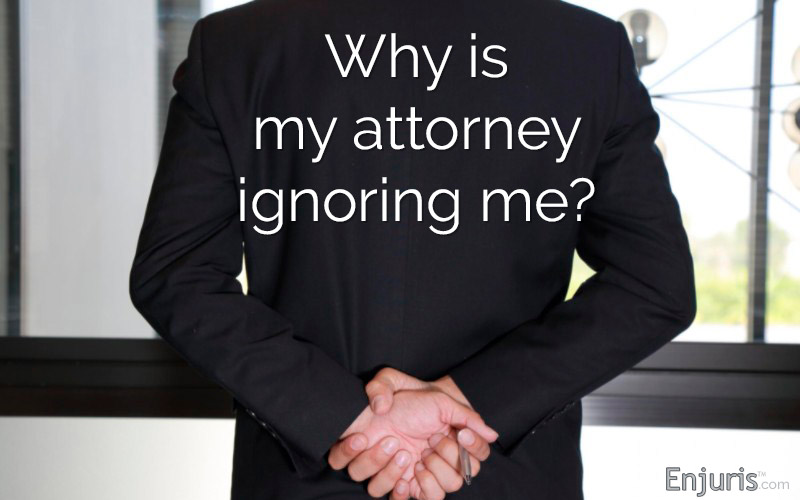 Table of Contents + show
Reasons your attorney is silent or is taking too long to respond
Reasons for the lack of communication by your attorney
What should I do if my lawyer isn't communicating with me?

After your initial accident, you decided to meet with an attorney. He was nice! You sat together for an hour in his conference room, going over your case and determining a strategy. You felt like he was listening and that he cared. Things were going well. You signed a contingency fee agreement, handed over your file and went home.

A few months later, you realized that you hadn’t heard from your lawyer in a little while. You sent him an email to see how things were going.

No response. But of course he wouldn't be ignoring you... would he?

Anxiety starts to eat at you. Why isn’t he writing back? You call and leave a message at his office. Still no response. (By the way, make sure to leave a message when you call, including your phone number so he or she has what is needed to call you back.)

"Why is my lawyer ignoring me?"

Reasons for the lack of communication by your attorney

According to the American Bar Association’s Model Rules of Professional Conduct 1.4:

(1) Promptly inform the client of any decision or circumstance with respect to which the client's informed consent, as defined in Rule 1.0(e), is required by these Rules;

(2) Reasonably consult with the client about the means by which the client's objectives are to be accomplished;

(3) Keep the client reasonably informed about the status of the matter;

(4) Promptly comply with reasonable requests for information; and

(5) Consult with the client about any relevant limitation on the lawyer's conduct when the lawyer knows that the client expects assistance not permitted by the Rules of Professional Conduct or other law.

(b) A lawyer shall explain a matter to the extent reasonably necessary to permit the client to make informed decisions regarding the representation.

It all comes down to what “prompt,” “reasonable” and “informed” mean. The most important thing to remember about this is that an attorney’s idea of “prompt” and a client’s might vary. Here are the top reasons for silence:

Until you get a response, you will never know the real reason.

What should I do if my lawyer isn't communicating with me?

If you think your attorney is ignoring you, send a certified letter to his office questioning the silence and that you are prepared to find a new lawyer if necessary. This will jolt him into action. He will respond either by saying the two of you aren’t a good fit, or he will start being much more communicative.

However, by simply outlining your grievances logically (you don’t need to write a novel) and saying the magic words (“I’ll find another attorney if necessary”), you will likely succeed in opening up a channel of communication that satisfies you.

Once you get his or her attention, try to come to agreement on communication protocols that work for both of you. (In fact, we recommend discussing this upfront before hiring an attorney in our interview checklist.)

If not, pay any outstanding bills, pick up your file and be on your way. There’s a statute of limitations to contend with, and you don’t want to lose the ability to file your claim.

If you do want to find another attorney, consider looking through the Enjuris law firm directory.