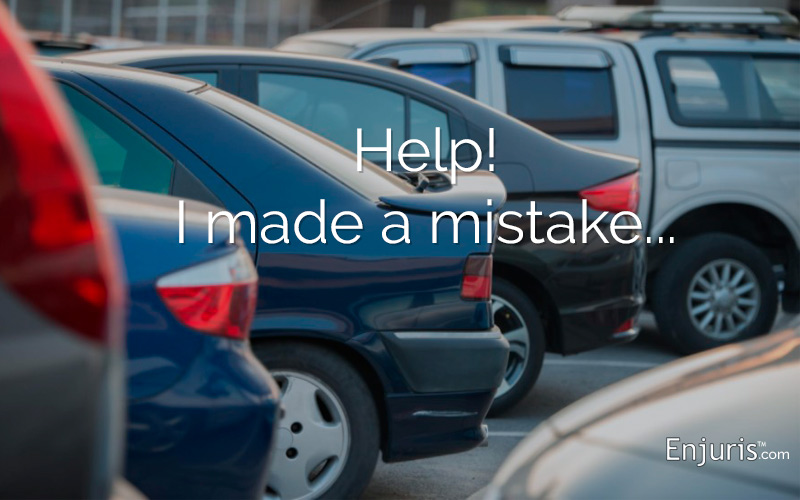 It’s dark, rainy and hard to see out of your rearview mirror. As you’re backing up out of a parking spot, you feel a sudden jolt as you accidentally reverse into a parked car. Oh no! Has this ever happened to you?

Or what about this? You navigate a crowded parking lot on a winter evening. When you arrive home, you notice a scratch on your bumper that you’re certain wasn’t there before you started navigating the parking lot. You’re worried you unknowingly hit a parked car.

The rules are relatively straightforward on what to do if you cause a car accident and all parties involved are present.

But what should you do if you hit a parked car and the owner is nowhere to be seen?

Here’s what you need to know (and do) if this happens to you.

What to do if you hit a parked car (8 steps)

State laws require all US drivers to obey a standard of “reasonable care, ” which means acting in a way any prudent driver would in a similar situation. Each state sets its own specific legal requirements in vehicle codes and other traffic laws and regulations. Whether an accident happens in a parking lot or public street, it makes no difference.

While it’s important to be aware of your local requirements, there are some common themes to help understand what the law requires if you hit an unattended vehicle and can’t find the owner of the other vehicle. Follow these steps to make sure you comply with the law and protect yourself from additional claims:

Legal DO’s and DON’Ts after hitting a parked car:

First, stop your car and take a breath. Make sure you’re okay and that no one in your car is injured. If you or someone else is hurt, call 911 immediately. If possible, move your car off the road and to a safe place nearby. Turn on your flashers to warn others to be cautious as you will be getting out of your car.

You’re not going to go to jail for hitting a parked car if you take the necessary steps, so stay calm and make your health and safety your number one priority.

Facing facts:If it helps keep you calm, remind yourself that you’re not the only person to hit a parked car. According to the National Safety Council, roughly 20 percent of car accidents happen in parking lots and garages (approximately 50,000 car crashes per year).

2. Don’t commit a hit-and-run in a parking lot

A hit-and-run accident is when a person collides with a person, car, or object and flees the accident scene without stopping to exchange information or assist the other people involved in the accident.

According to the National Highway Traffic Safety Administration, a hit-and-run crash happens somewhere in the United States every 43 seconds.

A hit-and-run is considered a criminal offense. Depending on the state, a hit-and-run may be charged as a misdemeanor or felony punishable by fines, jail time, license points or all of these.

If you hit a parked car and leave, a police officer can use witnesses, surveillance footage, your license plate, and other evidence to identify and arrest you. As a result of a hit-and-run conviction, you will face higher insurance rates and you may even have trouble finding an insurance company to insure you.

So how do you avoid a hit-and-run?

When you hit a parked car, you’re expected to locate the owner of the car and notify them. This may be difficult or impossible in some situations, such as when the vehicle is unoccupied, which is why most states have adopted a minimal requirement to leave a note with your contact information.

Pin the note under the wiper (in a sandwich bag if you have one in case it rains). This note helps you avoid being accused of a hit and run. Don’t say anything in the note that puts you in a bad light or admits fault such as “I’m such a bad driver.”

Enjuris tip:To further protect yourself, it’s a good idea to take a photograph of the note secured to the vehicle.

Some states stipulate the exact details to include in the note, but at the very least the note should contain your:

4. Report the accident to police

Most states require you to contact the police if the crash results in an injury or any damage.

In addition, some states, including Florida and California, legally require you to report any accident to the police as well as provide your information. In New York, a driver must notify police if they’re unable to exchange information.

Take as many photos as you can using your phone or a camera. Be sure to take photos of the vehicles involved, the surrounding area, and any damage. If possible, attach a timestamp to the photos. Most smartphones have a timestamp feature.

Talk to any eyewitnesses and take down their contact information immediately (witnesses are notoriously difficult to track down after a crash). Identifying witnesses helps show that you didn’t flee the scene and can reinforce your version of events. If you don’t feel comfortable approaching strangers, feel free to wait for the police and let them talk to the witnesses.

What to do if you panicked and left the accident scene

In a moment of panic, people often make the grave mistake of leaving the scene of the accident after hitting a parked car. This is a hit-and-run, which is considered a criminal offense, and the owner may have up to 2 years to file a claim.

Fortunately, there are ways you can make the situation right and clear your conscience.

First, how long ago was the accident? Did it happen less than an hour ago? If the parked car is still there, go back and leave your contact information on the windshield.

If the car is gone, there are two steps you should take:

Was the accident your fault?

If the car you hit was parked, you will likely be deemed “at fault” for the accident. However, you might be able to avoid liability or at least reduce your liability if you can prove that someone else was responsible or partially responsible for the accident. For example, you may have hit the parked car after swerving to avoid another car that was out of control or perhaps the parked car was illegally parked.

Assuming you’re not in a no-fault state, the person responsible for the accident will be responsible for paying the damages. You won’t be legally obligated to repair your own car unless it’s unsafe to have on the road. .

Will your insurance go up after hitting a parked car?

If you’re at fault, the short answer is probably. Ultimately, though, it’ll depend on your insurer, your insurance policy, the amount of damage and if you’ve filed a claim before. Some insurers have “accident forgiveness,” which allows a single at-fault collision without increasing rates.

Should you settle out of pocket? It’s worth noting that most insurers require you to report any accident within a reasonable time. This protects them and you. However, to avoid increased rates, people do sometimes choose to settle with the other driver out of their own pocket, but this carries some risks. For example, the innocent party might later claim that you never paid them or that there was more damage than they originally thought.

Ultimately, only you can decide what risks you’re willing to take.

What if someone hit your parked car and left?

If you or the police are able to identify the hit-and-run driver, you can make a claim against their insurance or file a personal injury lawsuit against them.

Additionally, there is something called “parked car insurance.” If you have a car that you only drive a few times a year (perhaps you keep it parked on the street most of the year), you can purchase parked car insurance (sometimes called “storage coverage”). This type of insurance generally doesn’t include liability coverage, but may cover the damages caused by someone who crashes into your parked car and flees the scene.

If you hit a parked car, try not to beat yourself up.

Everyone makes mistakes and many make this one. In the words of poet Alexander Pope: “To err is human; to forgive, divine.”

Have you ever hit a parked car? What was your experience? Feel free to share your story in the comments below