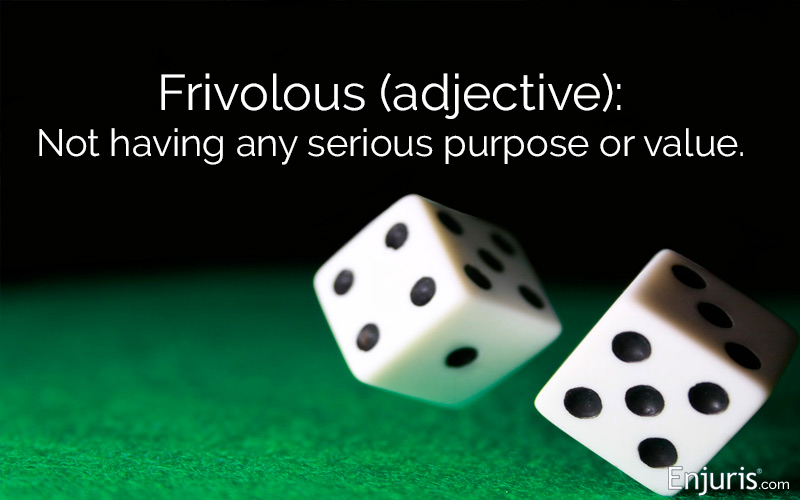 The vast majority of personal injury lawsuits filed in the United States involve legitimate claims and are the result of honest disagreements. But every year, a handful of lawsuits get filed that are patently ridiculous.

Let’s take a quick look at what frivolous lawsuits are, why they’re filed, and whether there are any repercussions.

A frivolous lawsuit has no legitimate legal or factual support.  Tweet this

Ridiculous, absurd, ludicrous, and nonsensical—these are all words that can be used to describe a frivolous lawsuit. But, frivolous lawsuits are perhaps best understood by looking at a few real-life examples.

In 1993, Richard Overton sued Anheuser-Busch for false advertising after he drank a 6-pack of Bud Light and the beer failed to produce visions of beautiful women on a sandy beach (as the advertisement he had seen seemed to suggest). He sought $10,000 in damages, claiming that Bud Light’s deceptive marketing caused him emotional distress.

The trial court threw out the frivolous lawsuit and the decision was upheld by the Michigan Court of Appeals.

Pearson v. Chung, Superior Court of the District of Columbia (2005)

Roy Pearson took a pair of pants to a local dry cleaners for alterations. The dry cleaners inadvertently sent the pants to the wrong location. Though the pants were quickly recovered and returned to Pearson, he claimed the pants didn’t belong to him (despite documentation provided showing otherwise). Pearson then sued the owners of the dry cleaners for $67 million in damages. Making this case even more bizarre, Pearson was actually an administrative law judge at the time of the lawsuit.

Unsurprisingly, the superior court judge ruled in favor of the dry cleaners.

In 2009, Lauren Rosenberg sued Google for more than $100,000. The basis of her lawsuit was that Google Maps advised her to walk along a freeway to get to her destination. Despite the directions being clearly wrong (or at least dangerous), she followed the directions precisely and was hit by a car.

Interestingly, the famous case most frequently cited as an example of a “frivolous lawsuit,” wasn’t frivolous at all.

In Liebeck v. McDonald’s Restaurants, Stella Liebeck sued McDonald’s after spilling a cup of hot coffee in her lap. For people who didn’t hear anything more about the case, they chalked the lawsuit up as another example of out-of-control litigation.

But in reality, there was much more to the case.

What’s more, McDonald’s had already received over 700 complaints about their scalding hot coffee, but they decided to continue serving their coffee more than 40 degrees higher than most restaurants. Finally, before suing McDonald’s, Stella attempted to settle the matter for a mere $800. McDonald’s refused.

Why are frivolous lawsuits filed?

Are there any consequences for filing a frivolous lawsuit?

Most courts are overwhelmed by legitimate lawsuits. For this reason, judges find it particularly frustrating when a frivolous lawsuit is filed. Fortunately, judges have the authority to sanction lawyers and fine plaintiffs who file frivolous lawsuits.

Have you had an experience with a frivolous lawsuit? Share your story below.