Accident Help (Home) » Injury Blog » Can a Prisoner Sue a Jail or Prison for Negligence? 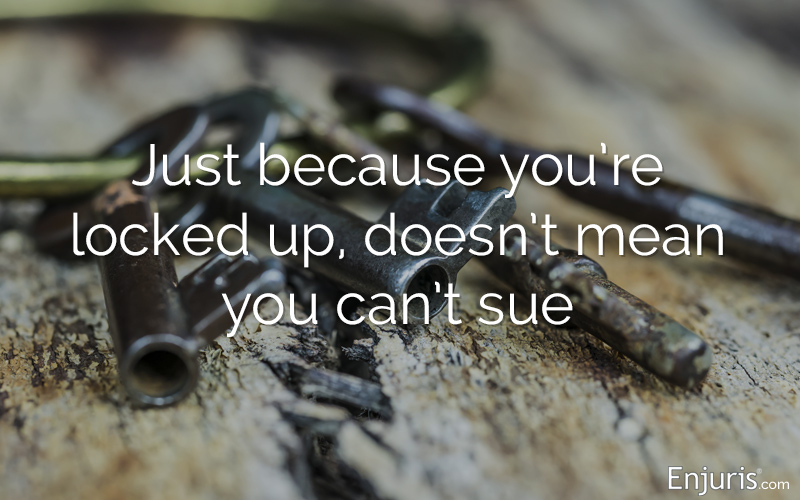 There are more than 2.3 million people incarcerated in the United States. To put this number in perspective, the number of people in jails and prisons in the U.S. equals approximately the entire city of Houston.

Free citizens can receive compensation for an injury by filing a personal injury lawsuit, but do inmates have any recourse for injuries sustained while incarcerated?

Can an inmate sue a jail or prison for negligence?

Table of Contents + show
Can an inmate sue a jail or prison for negligence?
The Prison Litigation Reform Act
Qualified immunity for state and federal employees
The Federal Tort Claims Act
Common types of personal injury lawsuits filed by prisoners
Do I need to hire a lawyer?

Most personal injury lawsuits are based on negligence. A negligence claim asserts that a person or entity failed to exercise reasonable care and that failure caused your injury.

To establish negligence, you must prove that:

Enjuris tip: Learn more about the elements of negligence and how to prove them.

Just like people who are not incarcerated, people in jails and prisons have the right to file a lawsuit against the jail or prison. However, inmates face several unique obstacles that free citizens don’t when it comes to filing a personal injury lawsuit.

The Prison Litigation Reform Act (PLRA) is a federal law that requires inmates to exhaust all administrative remedies before they’re permitted to file a personal injury lawsuit.

To put it simply, before you file a lawsuit, you must first try to resolve your complaint through the prison’s existing grievance procedures. Unfortunately, there are currently no regulations governing prison grievance processes, and many prisons have made their procedures so complex that inmates have been discouraged from pursuing claims.

Enjuris tip: Prison grievance policies vary from prison to prison, so it’s a good idea to request a copy of your prison’s grievance policy from the warden. If your prison doesn’t have a policy or is unable to provide you with the proper grievance forms, the grievance will be deemed “unavailable” and you’ll be permitted to file a personal injury lawsuit.

If you file your lawsuit before giving the prison the opportunity to resolve the issue, your lawsuit will likely be dismissed.

State and federal employees (such as prison guards in state prisons) are immune from lawsuits (meaning they cannot be sued) unless the lawsuit alleges a violation of a clearly established statutory or constitutional right.

Enjuris tip: Employees of private prisons and jails do NOT have the protection of qualified immunity.

If you were injured in federal prison, you must follow federal tort claim procedures. Among other things, this means that, before you file a lawsuit, you need to provide notice of your claim to the appropriate federal agency by filing a Standard Form 95 within 2 years of the incident that caused the injury.

Assuming that qualified immunity doesn’t apply and the claim is legitimate, inmates can file a lawsuit for countless reasons. There are, however, certain types of lawsuits that are more common than others:

Real Life Example: An inmate, Carlos Muniz, was beaten unconscious by other inmates after a guard locked him into a dormitory. Carlos filed a lawsuit against the prison alleging that the prison officials were negligent in failing to provide enough guards to prevent the assault. The court said that this type of lawsuit is appropriate, but found against Carlos because the officials followed prison regulations and could not have reasonably prevented the assault.

What about the coronavirus?

Unfortunately, COVID-19 has been spreading rapidly through the U.S. jail and prison systems.

Inmates can file (and in some cases, already have filed) lawsuits against jails and prisons for failing to prevent the spread of the novel coronavirus.

There are several different legal theories that can be used to support a lawsuit based on an inmate contracting the coronavirus. However, most of the lawsuits filed to date argue that the jail or prison violated the inmate’s Eighth Amendment rights to be free from cruel and unusual punishment by exposing them to the risk of illness and death from COVID-19.

Do I need to hire a lawyer?

You have a right to sue without a lawyer (known as “pro se”). However, inmates face several obstacles when suing a jail or prison that people who are not in prison don’t face. Consequently, you should strongly consider hiring an attorney.

Some nonprofit organizations represent prisoners for free or at a reduced cost. If you have a good chance of winning your lawsuit, a lawyer might take your case on a contingency-fee-basis. This means you’ll pay the attorney a percentage of your award if you win, but you don’t have to pay the lawyer anything if you lose.

If you’re considering suing a jail or prison, you can use our free online directory to reach out to an attorney in your area.