The new face of trial technology 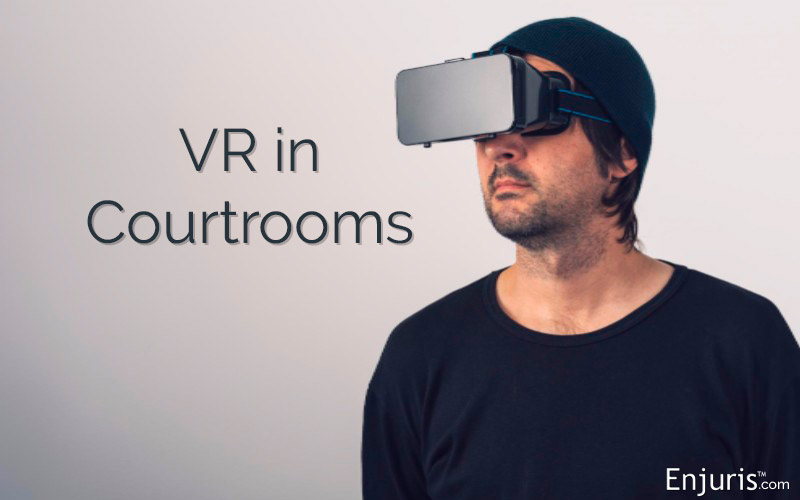 Wearing something like an Oculus Rift or HTC Vive can feel like strapping a brick to your face, but you forget that sensation once you open your eyes and step into a new world. You’re there. It doesn’t matter that you look like an idiot.

I, Jennifer Kain Kilgore, Enjuris editor, was at a legal conference recently and had the pleasure of trying on a VR headset at a personal injury consultant’s booth. They had created a piece of software that actually built a car accident scene in virtual reality so that juries could inspect what had happened during the incident in question. That’s a good concept, right? Let the jury step right into the shoes of the victim?

My brother is actually a video game designer. He’d told me months ago that VR is the coolest thing since Corgis. I was convinced it was like the first generation of “Mario” and would look terrible, but we would all put up with it because VR is so cool. I still remember buying my first MP3 player, which only held 10 songs. I put 10 copies of the same song on it and thought, “This is the future.”

Anyway, I put on that headset and was immediately dropped onto a highway that was so crystalline in its detail that I had to stand perfectly still, waiting for instructions. There was an exploded car in front of me, tilted up onto its side where it had collided with an 18-wheeler.

Everything was frozen in time. The weather was gorgeous. The sky was painfully blue.

We were under a bridge, and the shadows fell over everything in such lovely formations that for a few moments, I could only notice the artistry, the photography, the sheer perfection of this picture.

I was looking at absolute carnage, wrenched metal and flying debris, but it was flawless.

A disembodied voice said, “You can go forward to where those green circles are. Point the clicker in your hand –” I immediately brought up the remote, which allowed me to move around the picture without even moving my feet.

“Not yet,” the technician said, regret in his voice. “I haven’t enabled that feature.”

The 18-wheeler loomed over me, its grill twisted and deformed where it had smashed against the little red car.

Tiny plants and flowers dotted the broken concrete. There were even cracks in the cement. The attention to detail was incredible. I was only able to physically move around a few paces in the small space allotted to the booth, but the remote let me zoom around the picture.

“I can see why people are dating in virtual reality,” I said. A few people laughed, somewhere in real life. That was disconcerting. I was on a highway in rural Kansas or Arkansas.

I was only given about five minutes with the headset before other people began to clamor for a turn. When the technician removed it from my head, I had to grab a chair to steady myself.

“It takes a few seconds to reorient yourself, doesn’t it?” he asked, grinning.

“Yeah,” I said, looking around. The world didn’t seem quite real. “Yeah, it does.”

Virtual reality in the courtroom

To bring an accident or crime scene to life, lawyers must be prepared to spend a pretty penny. We’re talking $15,000 to $100,000, and they have to be exact. Then, the judge has to approve the evidence before it can be admitted.

This can be extremely helpful when conducting trials, because your jury can be brought to the exact place and time of a crime. The Bavarian State criminal office, for instance, is now using VR to assist with the continued Nuremburg Trials by creating a virtual reality version of the infamous Auschwitz concentration camp.

This can obviously have a significant emotional toll on jurors, however, because transporting them visually to a crime scene can be mentally and emotionally scarring.

Now imagine being transported to a gas chamber where thousands upon thousands of innocent people died during the Holocaust.

On a positive note, VR can be used to recreate accidents, showing jurors how things could have happened (or could not have happened), which can debunk stories and win cases. This also allows jurors to pause, rewind, zoom in, and change vantage points. Sometimes they can even interact with elements in the simulation. Each juror would have an individual headset and autonomous control.

It is definitely an interesting technology, and the downside is that whoever can afford to pay for it has a better shot at winning – biased storytelling and all that. However, it was certainly a great experience, and I think it will be cropping up in courtrooms more frequently in years to come as the price point drops.

What do you think about VR being used in trials?