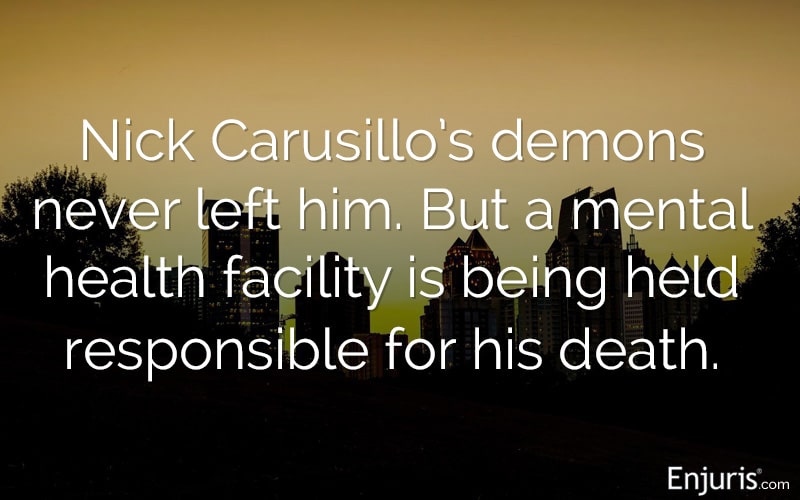 Most of us are aware of the nation's mental health crisis. Whether you have a loved one who's suffering or you have struggles related to your own mental health, there are no easy answers.

Money doesn't bring back a loved one, but a $77 million Georgia court verdict is “validation” for Tina Carusillo.

What happened to Nick Carusillo?

Table of Contents + show
What happened to Nick Carusillo?
The family's $77 million lawsuit against MARR
When should you file a wrongful death lawsuit?
What's next for the Carusillo family

29-year-old Nick Carusillo began showing signs of bipolar disorder when he was a teenager and he received a diagnosis when he was 20. By the time he was 29, he'd been in and out of several treatment facilities for mental health and substance abuse issues.

On August 29, 2017, Nick was admitted to Metro Atlanta Recovery Residences (MARR). Nick's doctor had prescribed lithium and Seroquel and Nick was “medically stable” when he was admitted to the facility. But after he'd been at MARR for a week, one of the facility's doctors took Nick off the lithium even though Nick's family and therapist said that he should remain on the medication.

Two weeks later, Nick's condition was deteriorating and he was kicked out of the facility because he had a mobile phone, which was not permitted. MARR sent him to a sober living residence but didn't inform the residence manager about Nick's mental health issues.

The next morning, Nick violated his curfew by leaving the residence. He was later discharged and the caretaker dropped him off at a meeting of Alcoholics Anonymous. About a day later, Nick was found deceased on Interstate 85 near Atlanta. He was naked and lying down on the ground, and he had been hit by several vehicles early that morning. Records indicate that there were no illegal drugs or alcohol in his system at the time.

The family's $77 million lawsuit against MARR

The facility argued that its doctor discontinued lithium for Carusillo because he was complaining of side-effects. It was also alleged that Nick purposely violated rules at the facility and was warned that he could be discharged if there were more violations—and then staff found his cell phone. Nick had a phone conference with both facility staff and his parents and he agreed to go to the sober living house but not a more intensive treatment facility.

The family claimed MARR was negligent by forcing Nick to leave the facility without his medication. They say he wanted to stay at MARR but was discharged because of the cell phone rule violation and his discharge caused the psychotic episode that resulted in his death.

The DeKalb County jury verdict of $77 million in damages to the Carusillo family includes:

Nick's parents, Tina and Mike Carusillo, said the reason they filed the lawsuit was to receive answers about why Nick was removed from the MARR facility. They believe that his mental health issues were not handled properly and he didn't have to die—they believed that if he had remained on lithium and stayed in the facility, he would not have died on the highway that fateful morning, only 60 hours after he left the facility.

When should you file a wrongful death lawsuit?

But in finding those answers, they discovered that they could be entitled to financial recovery, too.

The basis for a wrongful death lawsuit is the same as a personal injury lawsuit. It must meet the elements of negligence. If a defendant is negligent, it breached its duty of care to the victim in a way that resulted in foreseeable injury (or death).

There are two types of wrongful death lawsuits:

Regardless of the type of action taken, the damages are paid to the estate of the deceased person and distributed to their beneficiaries. Nick Carusillo had a son who was five years old at the time of Nick's death. It could be assumed that the damages his family received would be distributed between his son and his parents as next of kin.

A wrongful death lawsuit can provide survivors with damages that include:

These are generally the financial contributions the decedent would have made to the survivors had he or she lived. They can include:

These are intangible damages that are difficult to quantify, such as:

This is meant to punish the defendant and act as a deterrent for others. It is in addition to other damages. In Georgia, courts have not awarded punitive damages to surviving family members but they have awarded them to the estate administrator for the pain and suffering of the deceased person.

Georgia statute of limitations for a wrongful death claim

Under Georgia Code, Title 51, Chapter 5, § 51-4-1, the plaintiff has a period of two years following someone's passing in which to file a lawsuit for wrongful death.

What's next for the Carusillo family

It's likely that the mental health facility that was treating Nick just prior to his death will appeal the ruling. Legal proceedings in a high-value lawsuit like this one can take years to reach full resolution.