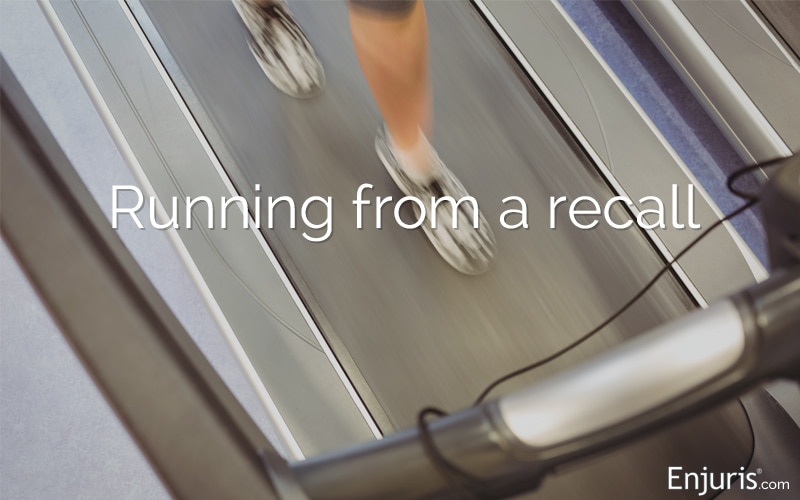 If you have to run for your life, there should at least be zombies chasing you, right?

Fitness is more than a fad or trend — it’s probably the advice given most often in almost every doctor’s office… we need to be doing something physical to keep ourselves healthy. As part of the growing national obsession with fitness, the company Peloton has made at-home training one of the hottest trends of the past few years.

Peloton first gained popularity with its stationary bikes, which come with subscriptions for live spin classes. Then, in 2018, the company launched its second fitness machine: the Peloton Tread. The Peloton Tread is similar to the bike model, where users can participate in live or on-demand bootcamp and circuit classes right from their own homes.

In many homes, the Peloton bike or treadmill has become a beloved staple. If your regular conversations involve the words “cadence” or “swarm,” one of them might be yours. Peloton has more than 4.4 million users on its platform, and more than 98 million workouts are completed each quarter.

But there’s a problem.

In May 2021, Peloton announced a recall of the Tread+ and Tread treadmills after 1 child’s death and 70 injuries were reported.

Table of Contents + show
In May 2021, Peloton announced a recall of the Tread+ and Tread treadmills after 1 child’s death and 70 injuries were reported.
What happened?
Pending Peloton lawsuits
Peloton agrees to pay a $19 million civil penalty to the Consumer Product Safety Commission
Is Peloton liable for injuries?
Should you file a lawsuit against Peloton?

A 6-year-old child died after being pulled under the rear of the treadmill. The treadmill has a running deck space of 67 inches and a slatted belt.

In addition, 72 other adults, children, pets and objects were reported as being pulled under the rear of the treadmill. Of those reports, 29 children suffered second and third-degree abrasions, broken bones, and lacerations.

Product liability is the area of law that covers injuries that happen as the result of an interaction with an item, or an inanimate object.

Just like if you were injured in a car accident and could file a lawsuit to cover related costs, you can also sue for injuries suffered from a defective product.

There are 3 types of defects that can lead to a product liability claim:

What type of defect caused the Peloton injuries?

In the Peloton instance, it appears that the treadmill injuries were the result of a design defect. A few weeks after the recall, Peloton released a software fix for the machines.

A Peloton user can now access a feature called “Tread Lock,” which locks the machine after 45 seconds of inactivity and requires a 4-digit code to unlock. Customers will be required to use this feature.

Peloton treadmill owners are able to return their machines for a refund.

The claimants allege that the Peloton advertisements showing a woman who had a child nearby indicated to consumers that the treadmill was safe to use around children. The remedy requested by the plaintiffs is either a refund of the $4,295 treadmill or a replacement that is safe around children and pets.

This lawsuit claims that the company failed to inform investors about the possibility of injuries to children or pets.

When the first complaints were made about Peloton treadmills, the Consumer Product Safety Commission (CPSC) said that the machine posed a serious risk to children. The agency said that it had several reports of children being trapped, pinned, or pulled under the rear roller of the treadmill. It urged people with children in their homes to stop using the product immediately.

The Peloton company initially pushed back on the CPSC’s statements and insisted that the treadmill was safe when used according to its instructions. However, it later reversed course and acknowledged risks to children and pets.

The Consumer Product Safety Commission (CPSC) filed charges against Peloton in September 2022. The charges alleged that Peloton received more than 150 reports of incidents where users were injured on Peloton treadmills in 2018 and 2019 but failed to immediately report those incidents to the CPSC (as required by law). What’s more, the CPSC alleged that Peloton knowingly distributed 38 recalled treadmills through third-party delivery firms after publicly announcing the recall.

On January 5, 2023, Peloton agreed to pay a little over $19 million in fines to the CPSC. As part of the settlement, Peloton must file annual compliance reports for the next five years.

Peloton said in a statement that it “remains deeply committed to the safety and well-being of our members and to the continuous improvement of our products.”

Is Peloton liable for injuries?

Does the fact that the treadmills were recalled mean that Peloton is automatically liable for any injuries or deaths caused by the machines?

Most courts will allow a recall to help establish that a product was defective, but that doesn’t make a manufacturer automatically liable.

A plaintiff must prove each element of negligence in order to successfully recover damages from a defective product claim. In other words, you must demonstrate that the product’s defect caused your injury and that it cost you money.

For instance, if your child was too close to the Peloton treadmill and their foot was caught underneath, they might receive a minor injury like an abrasion (scrape). But if you treated the abrasion at home without needing to visit a doctor and it healed quickly and without complications, then it didn’t cost money and therefore there are no “damages.”

You can only recover damages to recover the expenses related to an injury.

If an injury happened after the recall was issued, the manufacturer would still need to prove that the plaintiff directly received notice of the recall and was adequately warned of the dangerous potential caused by the defect in order to avoid liability.

This rule sets forth the principle of subsequent remedial measures.

The rule says that these measures cannot be used as evidence that proves a product defect and they are not to be interpreted as an admission of liability for past injuries.

Should you file a lawsuit against Peloton?

If you or a member of your family was injured by a Peloton treadmill, you might be able to seek financial compensation.

In order to do so, you need to prove that you were actually injured because of the defect in the Peloton treadmill and that the injury cost money — in other words, you required medical treatment, had to take time off from work, or there were other related expenses.

It’s important that you followed the product’s instructions properly. Often, a defendant will claim that a plaintiff was contributorily negligent, or that their own actions contributed to the injury. If you were using the Peloton in a way other than as intended, you might not be able to recover damages.

If you own a Peloton and weren’t injured, be sure to install the software update and any other related or future updates in order to keep your machine functioning safely.

However, if you were injured by a Peloton machine or any other defective product, you should contact a personal injury lawyer to learn your options and file a claim.

The Enjuris law firm directory can help you connect with a lawyer in your area who is experienced, skilled, and knowledgeable on the law and the legal system to help you receive compensation.