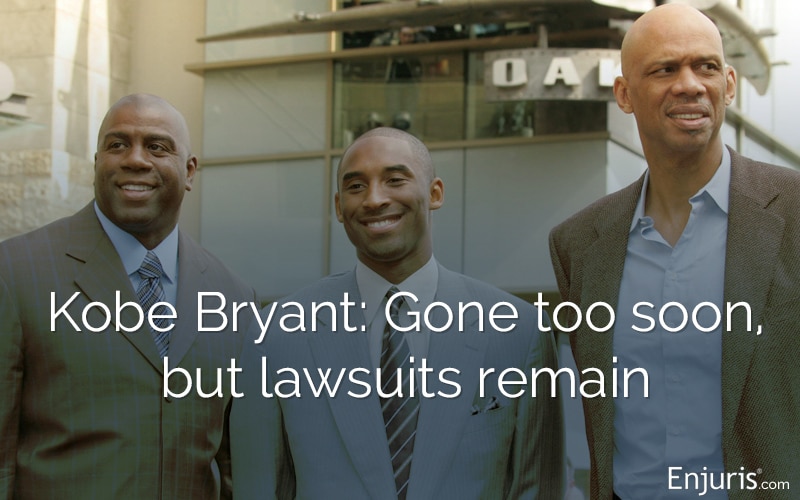 2020 was a year full of difficulties for so many people worldwide. Perhaps the first collective loss of the year was the day we received the shocking news that basketball legend Kobe Bryant had died in a helicopter crash in Southern California.

Bryant was flying in a private helicopter in Southern California on January  26, 2020 with his 13-year-old daughter Gianna (“Gigi”) and 7 other people, including children and parents associated with Gigi’s basketball team.

The helicopter was a Sikorsky S-76B, described as a “workhorse” with a strong record of reliability. This model of helicopter is most often used to shuttle “VIP” travelers like Bryant and other celebrities for short distances. In fact, the Sikorsky S-76B is the series used by Queen Elizabeth II.

On the day Bryant died, the helicopter departed from John Wayne Airport in Orange County, reached 2,000 feet elevation, and then crashed into a hillside at about 1,400 feet in Calabasas.

What went wrong that caused Bryant’s helicopter to crash?

Though the crash was more than a year ago, we’re only now getting some concrete answers. Air traffic controllers near Burbank and Van Nuys, which are just north and northwest of the departure point, reported poor visibility on the date of the crash.

General aviation (GA) is the term that describes all civilian aviation except passenger airlines.

Facing facts:There are more than 198,000 general aviation aircraft registered in the U.S., and there are nearly 500,000 certified pilots who fly GA aircraft.

These failures can result in the following:

The National Transportation Safety Board (NTSB) released findings that indicate that the pilot, Ara Zobayan, flew the helicopter at excessive speeds in bad weather.

There were rules that prohibited Zobayan from flying into clouds where there was poor visibility, but he tried to “punch up” over the clouds. But when he attempted this maneuver, he became disoriented. He told air traffic controllers that he was climbing, but in actuality he was turning left and descending the aircraft.

Although Zobayan was an experienced pilot, he made several errors that day.

For one, the weather was not favorable for flying that day. The pilot could’ve told Bryant ahead of time that the flight wouldn’t be safe, or he could have altered course mid-flight and landed at a closer location.

The second serious misstep was that Zobayan requested special permission to fly through low-visibility areas, but this violated federal rules. Once he became disoriented because of the weather conditions and visibility, he either didn’t refer to his instruments or didn’t trust them. That’s why the helicopter was actually plummeting at a speed of 4,000 feet per minute when he believed he was ascending. (source)

In fact, a member of the NTSB said that Zobayan “ignored his training” and mentioned helicopter pilots who fly into clouds without relying on instruments, saying that “a certain percentage aren’t going to come out alive.” (source)

Facing facts:The NTSB reports that between 2010-2019, there were 184 crashes involving spatial disorientation, 20 of which were fatal helicopter accidents.

There has been a lot of publicity about Vanessa Bryant, Kobe’s grieving widow, filing lawsuits related to her husband’s and daughter’s deaths.

These claims are still underway.

There are currently 9 lawsuits related to the crash. The families of the other people who died in the crash have joined Mrs. Bryant in her negligence lawsuits. The helicopter company filed countersuits against the air traffic controllers. There are some additional claims to be litigated that are related to other financial aspects to the crash. (source)

Kobe Bryant’s accident is getting a lot of publicity because he was a famous and well-liked public person.

If the crash involves a private plane, there could be negligence on the part of the pilot or owner of the plane. It might also include the:

It should be noted that there’s a major difference between a commercial airliner and a small private plane. If there’s a severe storm or other weather conditions, a large jetliner can usually climb to a higher altitude that allows it to soar over the storm or clouds. But a small plane (or, in Bryant’s case, a helicopter) is more susceptible to bad weather conditions.

All pilots are responsible for tuning into weather conditions, both actual and anticipated, and modifying flight course accordingly. It seems that this might prove to be the biggest failure in the flight that tragically killed Kobe Bryant and 8 other people.

If you’ve lost a loved one in an aviation accident, it’s likely to be a complex lawsuit. A personal injury lawyer can help you to reach a successful verdict and receive compensation for your losses.