OSHA cites nearly 20 egregious violations by employer, issues more than $2.5M in fines. Learn what you can do in the event of an industrial accident.

Table of Contents + show
OSHA cites nearly 20 egregious violations by employer, issues more than $2.5M in fines. Learn what you can do in the event of an industrial accident.
How the tragedy could have been prevented
Industrial jobs pose risks for employees
What if I get hurt in an industrial job?
Options for litigation – can I sue my employer?
Know your rights at work
Personal injury cases deter future tragedies 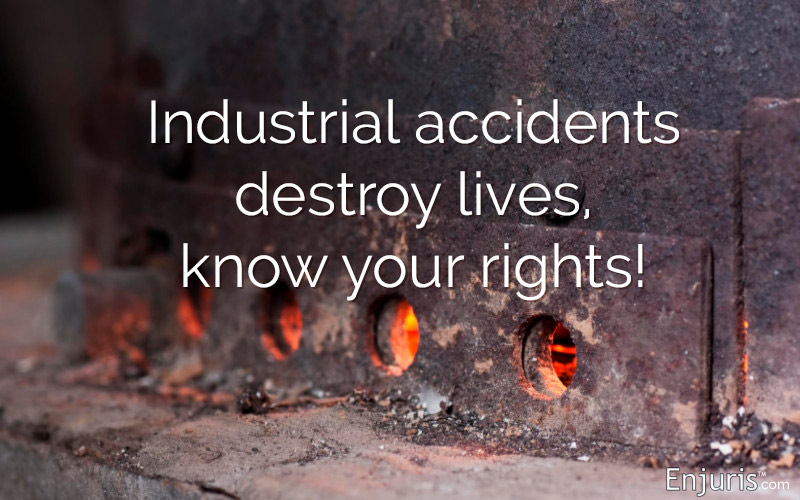 A 20-year old Alabama woman, just weeks away from her wedding day, was crushed to death in a robotic machine while working at a factory that was found to have multiple safety violations.

Regina Allen Elsea was employed as a temporary worker at a manufacturer in June 2016 when she was crushed to death by the machine, which made auto parts for Hyundai and Kia vehicles.

An investigation by the U.S. Occupational Safety and Health Administration (OSHA) led to citations for 23 willful, serious and other-than-serious violations, including 19 egregious willful violations, to Ajin USA of Cusseta, Alabama.

Hyundai and Kia had been warned of potential danger at their supply plants, but continued to set on-demand production targets so high that workers were often required to work six and seven days per week to meet them, according to OSHA. Additionally, to reduce costs, the supplier appeared to cut corners on safety.

Two staffing agencies were also cited in the investigation, Alliance Total Solutions LLC and Joynus Staffing Corp. All together the companies face more than $2.5 million in penalties for federal safety and health violations.

How the tragedy could have been prevented

Elsea was crushed after the assembly line stopped and she, along with three of her co-workers, entered the robotic station to clear a sensor fault. The robot restarted abruptly, crushing the young woman inside the machine.

"This senseless tragedy could have been prevented if Regina Elsea's employers had followed proper safety precautions," Dr. David Michaels, assistant secretary of labor for occupational safety and health, said in a statement. "In addition, it is unfortunate that Hyundai and Kia, who set strict specifications on the parts they purchase from their suppliers, appear to be less concerned with the safety of the workers who manufacture those parts."

OSHA issued two serious citations to Ajin USA for allowing employees to work with parts having sharp edges while improperly wearing or not wearing protective sleeves, and not installing effective shields or curtains on welding machines.

The agency also issued two serious citations to Alliance and Joynus for failing to control potentially hazardous stored energy during maintenance and servicing, and for not ensuring employees had locks to properly shut down machinery.

If Ajin USA had followed OSHA's Regional Emphasis Program on Safety Hazards in the Auto Parts Industry, the tragedy could have prevented, according to the agency. After OSHA announced its fines, Ajin stated that it is conducting its own investigation and will continue to cooperate with the agency.

Elsea's mother has filed a wrongful death lawsuit against Ajin USA and Joynus Staffing, according to BuzzFeed.

Former employees at the plant indicated that they were encouraged to get a stalled machine running as quickly as possible, said Kendall Dunson of Beasley Allen Law Firm, which filed the wrongful death suit. "…operators like Ms. Elsea and her co-workers are not qualified to secure advanced machinery. Maintenance or advanced technicians are usually required for that purpose." Additionally, the OSHA report discloses that multiple other employees attempted to reset the sensor before Elsea did.

Unfortunately, Elsea's accident is far from an isolated incident. According to the U.S. Bureau of Labor Statistics (BLS) a total of 4,836 fatal work injuries were recorded in the United States in 2015. Fatal injuries in the private manufacturing industry, such as the plant Elsea worked at, rose to 353, the highest rate for that industry sector since 2008.

According to the U.S. Bureau of Labor Statistics 4,836 fatal work injuries were recorded in the United States in 2015.

Nor are Elsea's employers alone in violating safety standards. Many the most frequently cited violations for general industry workplaces in FY2015 where the same issues that Ajin USA was fined for:

What if I get hurt in an industrial job?

If you work in manufacturing and are hurt on the job, you will likely have to deal with the workers' compensation system. Some states have a "no fault" insurance system that helps employees injured in the scope of their employment. Therefore, it doesn't matter who or what injured that employee – the worker is still covered by insurance. However, the worker can't sue the employer unless there was an intentional injury by that employer.

It is important to note that in some states workers' compensation benefits may be reduced by 50% if a worker's injury was caused by a knowing violation of a safety regulation. This would also be the case if the worker was consuming drugs or alcohol at the time of the injury.

Options for litigation – can I sue my employer?

An injured employee could sue an independent third party for injuries he or she sustained while working. This could take the form of a personal injury negligence claim or even a product liability claim for a defective piece of machinery that caused harm.

If the worst happens and a worker dies while on the job, his or her family can bring a wrongful death suit against the employer, as Elsea's family has done.

If a subcontractor or other independent contractor is hurt on the job, courts would look at their contract with the general contractor and their degree of control over the job site.

Additionally, they would examine whether any laws or regulations had been violated; this is called "negligence per se." If a law had been violated, it wouldn't matter what the circumstances surrounding the case were – like a workers' compensation claim, the facts are immaterial. All that matters is that a law was broken.

Know your rights at work

OSHA has general industry, construction, maritime and agriculture standards that are intended to protect workers from a wide range of known construction hazards. These include fall protection; avoiding exposure to known chemicals and toxins; and placing guards or other safety devices on blades and exposed pieces of machinery.

Employers in these industries must abide by the General Employer Clause, which states that they must keep their workplaces free of known hazards. OSHA can determine whether a violation of standards occurred and to charge employers with violations; however they aren't empowered to bring or investigate third-party claims.

The best way to protect your rights if you've been hurt in your place of work is to retain an attorney who is knowledgeable about your injury.

Verdicts in personal injury cases like this not only serve the role of compensating victims, but also deter future bad conduct by employers, Dunson says. So in Elsea's case, "…a verdict can serve the purpose of teaching AJIN a lesson and even influencing similarly situated companies from similar conduct."

To prevent such tragedies like this from happening in the future, Dunson recommends that employers provide employees with the proper training and information needed to perform their jobs.

"Knowledge is power. Unfortunately it appears in this case as if the employees exposed to the crushing hazard were not given the proper information and training to protect themselves. Without the proper training and information, it is extremely difficult to avoid hazards," Dunson said. "Once properly trained and informed, employees should follow those rules and training at all times. Machines are useful but are also dangerous to humans."

Have you or a loved one been injured in an industrial accident? Did you pursue legal action? Please share your story below!