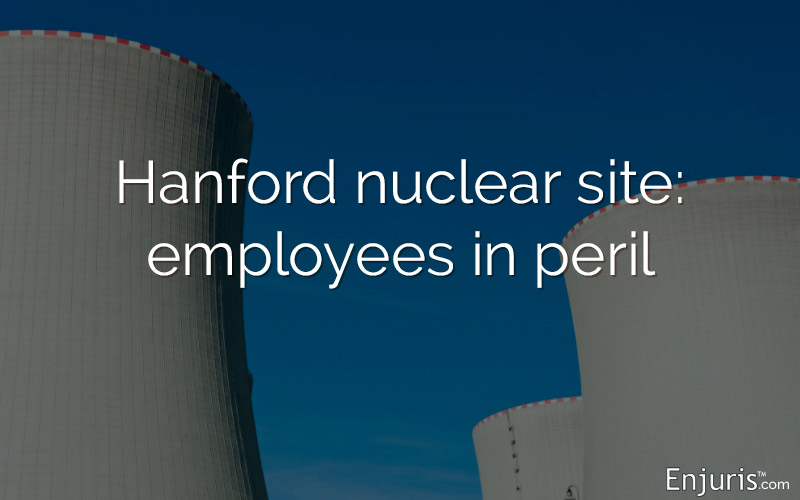 While it has not been actively used for producing plutonium for nearly 70 years, the Hanford nuclear waste site in Washington State continues to expose its employees to hazardous waste. Some are getting sick and even dying as a result, according to a recent report from NBC News.

While it was an active plant during the Cold War the Hanford site produced plutonium for America's nuclear arsenal. Now the $110 billion cleanup of nuclear waste at the site is run by the U.S. Department of Energy (DOE) through its contractor, Washington River Protection Solutions.

The cleanup of the waste, which is stored in 177 underground tanks, is expected to last for 50 years. In the meantime, some employees at the plant are starting to fall gravely ill because, according to the report, the tanks are leaking hazardous waste and proper precautions for worker safety are not being taken.

The perils of cleaning up a toxic dump

There are 9,175 employees at Hanford as of September 2016, including federal workers and subcontractors. Formerly healthy employees are coming down with debilitating lung diseases, dementia, nerve pain and other illnesses, and at least three deaths have a documented link to exposure at Hanford, according to the NBC News report.

Hanford cleanup efforts began in 1989 when the DOE reached a tri-party agreement with the U.S. Environmental Protection Agency and Washington State that established milestones for bringing the site into compliance with environmental regulations.

DOE states that since that time considerable progress has been made at Hanford, which has reduced the risk the site poses to the health and safety of workers. “…[P]recautions have been taken so that the waste does not contaminate the air, the ground, the water table underneath the ground, the Columbia River, the people who are doing the cleanup work, or the people and environment near the Hanford Site.”

However, NBC News reports that in nearly 20 studies conducted over a 24 year period, DOE recognized that there is a safety risk to workers at Hanford. Recent reviews showed toxins in the air "far exceeding occupational limits" and a "causal link" between vapor exposure and lung and brain damage.

Exposure readings that were taken from Hanford in 2009 show Mercury levels at 473% above occupational limits, and ammonia levels at 1800% above limits. During a one-week period in April 2016 47 people working at Hanford sought medical attention due to chemical vapor releases, according to a story by local Washington NBC affiliate KING 5.

A number of workers told NBC News that they were almost never allowed to ask for protective gear such as supplied air tanks, which are recommended by many safety experts. Several employees claimed that they were discouraged from seeking safety equipment because of the high cost, and some faced retaliation for seeking such equipment or reporting safety risks.

The Hanford site is not unique to the problems of whistleblower retaliation from DOE and its contractors. A July 2016 U.S. Government Accountability Office report found that the DOE had allowed “unlawful retaliation” perpetrated by contractors at its sites across the country, including Hanford.

The Hanford Challenge is a local nonprofit that works with “concerned employees, insiders, retired employees and whistleblowers to assure that their voices can be safely heard within the DOE and contractor communities.”

In cooperation with Local Union 598, which represents Hanford pipefitters and welders, the group has engaged in litigation against Hanford, seeking:

Washington River Protection Solutions has reached an agreement with workers' unions to provide air tanks to all workers, however it is a voluntary agreement that could be a temporary fix and doesn’t solve broader safety problems at the plant, experts say.

Some Washington State officials are also intervening, including Lieutenant Governor Cyrus Habib, who has promised an investigation, and State Attorney General Bob Ferguson, who is suing the federal government over Hanford.

"I ask the question all the time, how many more workers have to get sick at Hanford before they do something about it? How many?” Ferguson told NBC News.

A DOE official interviewed by NBC News stated that all Hanford workers who have been referred to medical evaluation have been returned to work and that DOE is "strengthening communication" with Hanford workers. Additionally, in 2016 DOE invested $50 million in improving air monitoring.

The DOE and its contractors offer safety standards for the plant and the Hanford Site Employee Concerns Program (ECP) process, which is intended to:

However, numerous employees interviewed by the media stated that their warnings about leaks and poor air conditions have gone unheeded. Some have even said they were fired or demoted for exposing dangers at the plant.

"Our lives don't matter," Hanford employee Seth Ellingsworth told NBC News. "Our health does not matter. We are simply a business decision. It costs more money to protect us than to fight us, to deal with us being sick."