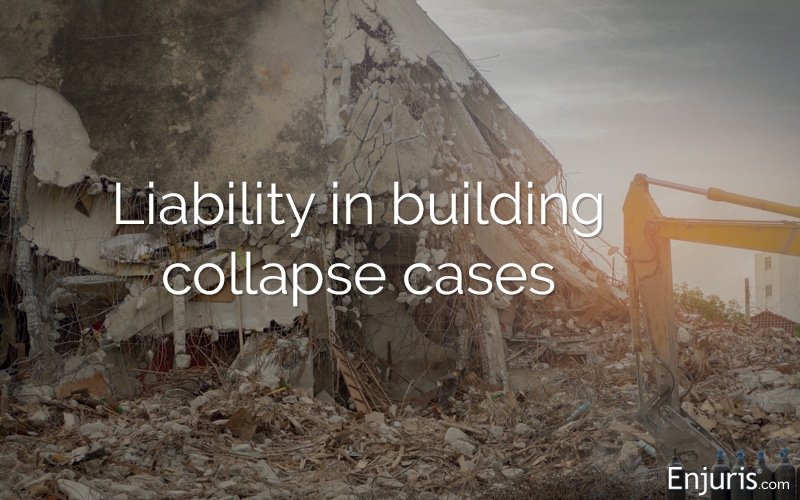 On an early morning in June, Cassie Stratton stood on the balcony of her oceanfront condo talking to her husband on the telephone. She spoke frantically about how the building was trembling just as a sinkhole appeared where the pool used to be. A moment later the line went dead.

The tragic collapse of the Champlain Towers South condominium building in Surfside, Florida, on June 24, 2021, will spur years of litigation as victims and their families attempt to identify who was at fault for the tragic accident.

Table of Contents + show
The tragic collapse of the Champlain Towers South condominium building in Surfside, Florida, on June 24, 2021, will spur years of litigation as victims and their families attempt to identify who was at fault for the tragic accident.
What happened?
Who’s liable when a building collapses?
Lawsuits filed by residents of the Champlain Towers South

Let’s take a look at what happened and how liability is typically determined in building collapse cases.

On June 24, 2021, at about 1:19 a.m., the center of the 12-story Champlain Towers South condominium building in Surfside, Florida suddenly collapsed. Less than 6 seconds later, the eastern end of the building collapsed.

As emergency crews rushed to the scene and began poring over the wreckage in search of survivors, security footage of the building’s collapse began circulating online.

Currently, the death toll continues to climb and more people who may have been in the building are still missing.

Although the cause of the collapse remains unknown—and will likely remain unknown for some time—the turbulent history of the Florida high-rise condo hints at several potential defendants.

A timeline of events that led to the Florida condo collapse

A group of developers finances the construction of the 136-unit Champlain Towers South, along with the smaller Champlain Towers North. The structural engineer for the development is Breiterman Jurado & Associates.

A structural engineering report from Frank P. Morabito details numerous problems with the condo, including “major structural damage” to the concrete slab below the pool deck. The report recommends extensive repairs in the “immediate and near future.” The report also notes that failure to complete the recommended repairs could “cause the extent of the concrete deterioration to expand exponentially.”

Surfside’s Chief Building Official Ross Prieto reassures residents that the condo is in “very good shape” at a board meeting of the Champlain Towers South Condominium Association.

Several condo association members resign, expressing frustration that the repairs described in the 2018 structural engineering report have been delayed.

A board member emails Ross Prieto explaining that several residents have concerns regarding the structure of the building because it was “shaking” while a nearby building, known as Eighty Seven Park Miami, was being constructed. Ross Prieto declines to send someone out to check on the building.

President of the Champlain Towers South Condominium Association Jean Wodnick sends a letter to the residents stating that the building’s condition has worsened significantly since Frank P. Morabito’s inspection in 2018. A special assessment of $15 million is proposed to pay for structural repairs. The letter also notes that: “A lot of this work could have been done or planned for in years gone by. But this is where we are now.”

Miami-Dade County mayor Daniella Levine Cava announces an audit of all residential properties that are at least 5 stories high and 40 years old.

Who’s liable when a building collapses?

In most cases, proving that someone else at fault means establishing the 3 elements of negligence:

Unfortunately, identifying who is responsible for a building collapse can be incredibly complicated. Determining the cause of a collapse alone can take months or even years of investigation. It’s not unusual for lawyers to sue an initial defendant and then add defendants as more information becomes available through discovery.

With that in mind, let’s look at a few potential defendants in building collapse cases:

Lawsuits filed by residents of the Champlain Towers South

Bob McKee, the lawyer who filed the lawsuit on behalf of Steven Rosenthal, a resident who survived the collapse, said that until another cause can be identified, the presumption is that failed maintenance was to blame. The Association will likely argue that there was no evidence of imminent collapse.

In all likelihood, the judge will consolidate all the lawsuits that will soon be filed into a class action case. The claims will almost certainly exceed the $18 million in liability insurance held by the Association.

Building collapse cases are incredibly complex. Statutes of limitation tend to protect construction companies. What’s more, government entities, such as building inspectors, often receive civil immunity. If you or a loved one have been involved in a building collapse, it’s a good idea to contact an experienced attorney as soon as possible.