Mike Partain was born at Camp Lejeune in North Carolina. He lived on the military base for the first five months of his life.

At age 39, Mike, an otherwise healthy and active individual with no genetic markers, was diagnosed with male breast cancer.

After receiving his diagnosis, Mike met with about 125 other men with this rare form of cancer. All of the men had one thing in common: Camp Lejeune.

What is Camp Lejeune?

Constructed in 1941 to prepare for America’s entry into World War II, Camp Lejeune remains, according to the United States Marine Corps, “a warfighting platform from which Marines and Sailors train, operate, launch, and recover while providing facilities, services, and support that meet the needs of warfighters and their families.”

From 1957 to 1987, United States Marines and their families drank and bathed in water that investigators determined was contaminated with dry-cleaning fluid, benzene, and other cancer-causing chemicals.

Reports indicate that Camp Lejeune officials knew about the contaminated water by 1982 at the latest but failed to immediately notify those living at Camp Lejeune or take any steps to remedy the problem until years later.

Approximately one million military and civilian staff and their families may have been exposed to the contaminated drinking water at Camp Lejeune.

According to the Agency for Toxic Substances and Disease Registry (ATSDR), a federal public health agency within the United States Department of Health and Human Services, exposure to contaminated drinking water at Camp Lejeune likely increases the risk of:

The effect of exposure to any of the chemicals found in Camp Lejeune’s drinking water depends on:

Accordingly, not everyone who was exposed will develop health problems.

Compensation for chemical exposure that results in illness 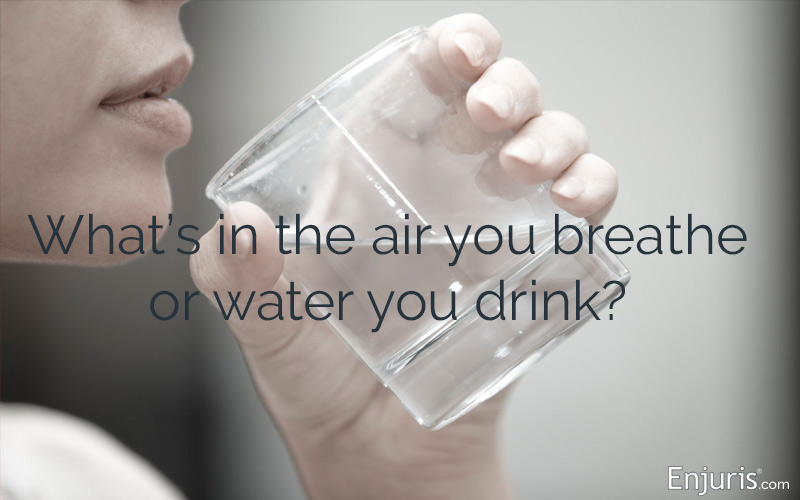 Chemical exposure is included in personal injury law as a toxic tort.

A tort is a wrongful act that leads to civil liability. A toxic tort is a case when the plaintiff is injured from exposure to a chemical or toxin.

Most of the contaminated wells on Camp Lejeune were shut down in 1985.

According to the United States Marine Corps Division of Public Affairs, the water at Camp Lejeune is safe to drink today and has been safe since at least March 1987.

You can see the most recent water quality reports here.

What is the Camp Lejeune Justice Act?

Veterans and their families began seeking compensation in the decades after the public became aware of Camp Lejeune’s water contamination issues. However, they faced a couple of significant legal hurdles:

In recent years, attempts have been made to compensate the Camp Lejeune victims with healthcare benefits and other payments:

Unfortunately, many people who became sick as a result of the contaminated water at Camp Lejeune did not qualify for the above programs.

"The legislation proposes to correct unfair legal barriers unique to Marine families stationed at Camp Lejeune due to an anomaly in the application of North Carolina law in the federal court system by establishing a new federal cause of action for individuals exposed to CLCW. This enables individuals affected by toxic exposure at Camp Lejeune to bring suit before the district court for the Eastern District of North Carolina to present evidence for injuries caused by exposure to CLCW."

To put it simply, those exposed to contaminated drinking water at Camp Lejeune can now file a lawsuit in the district court for the Eastern District of North Carolina.

Who’s entitled to compensation under the Camp Lejeune Justice Act?

To be eligible for compensation, you must meet the following criteria:

What if I’m already receiving disability payments for my illness or injury?

Awards under the Camp Lejeune Justice Act will be offset by the amount of any disability award, payment, or benefit you may have received from any program administered by the Secretary of Veterans Affairs, the Medicare program, or the Medicaid program in connection with contaminated water at Camp Lejeune.

How do I file a claim under the Camp Lejeune Justice Act?

If you believe you're entitled to compensation under the Camp Lejeune Justice Act, you must file a CLJA Claim Form with the Office of the Judge Advocate General of the Navy’s Tort Claims Unit (TCU) in Norfolk, Virginia.

Once you’ve filed the appropriate claim, the TCU has 180 days to investigate and make a determination about your claim.

If no action is taken within 180 days or your claim is denied, you can file a lawsuit in the U.S. District Court of the Eastern District of North Carolina.

Notably, you will need to prove that exposure to Camp Lejeune’s contaminated water caused your injury or illness in order to receive compensation. In most cases, this will require testimony from at least one medical expert. Although you must prove causation, you do not need to prove negligence (i.e., that someone was at fault for contaminating the water).

How do I choose a lawyer to handle my Camp Lejeune claim?

As is the case with any new law, there is a lot of confusion about who qualifies for compensation and how much compensation the individual can receive.

An experienced North Carolina attorney can help you navigate the legal process and ensure that you receive all of the compensation you deserve.

When choosing an attorney, it’s important to find someone who has experience litigating complex claims in federal court.