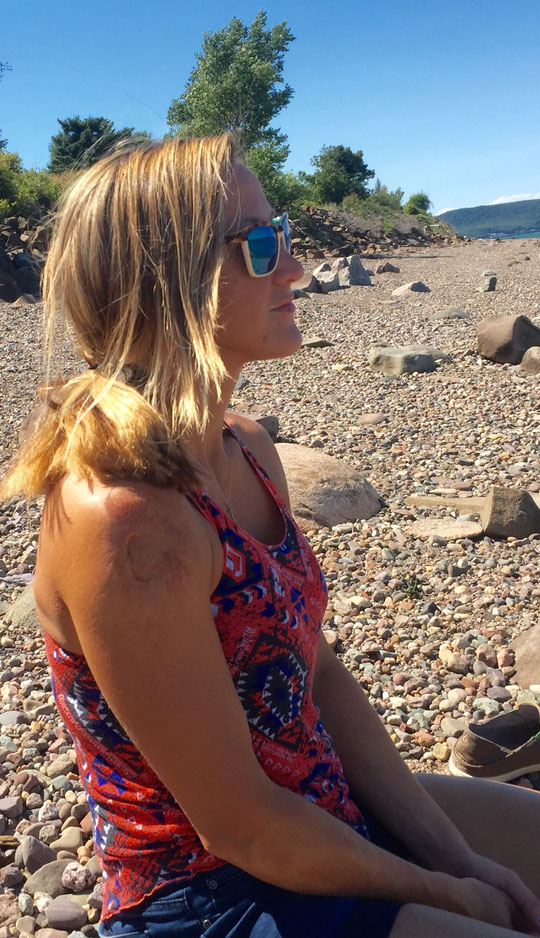 Elizabeth faces a bright future now, but a motorcycle accident almost took that away from her. Follow her journey from despair to hope.

When she was just 22 years old, Elizabeth Banks was living the life of many people that age - moving away from home, spending time with friends and enjoying a bit of a party lifestyle.

That is, until a devastating motorycyle accident changed everything.

She had relocated to Gainesville, Florida, from Nova Scotia, Canada, and was working full time as a server in a restaurant. Like many young people on their own for the first time, she would go out drinking with her friends, occasionally excessively.

On one such night, an acquaintance offered to give her a ride on his new motorcycle. She accepted, despite not having a helmet or protective gear. She hopped on the bike in her miniskirt and stiletto heels.

At first the ride felt normal. She even encouraged the driver to go faster.

But in an instant, everything changed.

Half of her body was covered in third degree burns and her skin had melted completely off in six locations, exposing the bones beneath. She also broke her collar bone.

They were travelling at about 70 miles an hour on an empty street when the bike hit a light reflector in the road, which was wet from an earlier storm. The bike began to hydroplane and, on instinct, the driver pushed her off the bike and jumped off himself. (He feared that they would smash into a tree and be killed on impact.) Elizabeth landed hard on her side and then skidded across the roadway on her back.

Her clothes were burned off her body and she was left naked and bloodied on the side of the road.

She would find out later that half of her body was covered in third degree burns and her skin had melted completely off in six locations, exposing the bones beneath. She also broke her collar bone.

"I should not have survived that crash."

Table of Contents + show
"I should not have survived that crash."
The worst feeling in the world...
Legal and financial ramifications
Moving forward with hope
What happened to the driver of the motorcycle?
More about pursuing a legal case after your motorcycle accident

Despite being gravely injured, at first Elizabeth refused medical treatment because she didn’t have medical insurance. However, she was in no position to be making decisions. Friends had found her and taken her to an apartment, where someone finally called her best friend, Eric. He arrived and, seeing her state, immediately took her to the hospital.

She was unconscious and slowly bleeding to death by the time she arrived in the emergency department.

When she woke up two days later, with her dad by her side, the doctors had already performed 11 hours of surgery to clean debris – mostly pavement – out of her wounds.

Elizabeth stayed in the burn unit at first, where she had constant monitoring in case of infection. Her parents and one of her sisters flew to be with her. "I was wrapped in bandages from head to toe with a morphine drip going into my heart. I remember the pain being constant. I couldn’t eat very much and it would take me hours just to finish one meal." 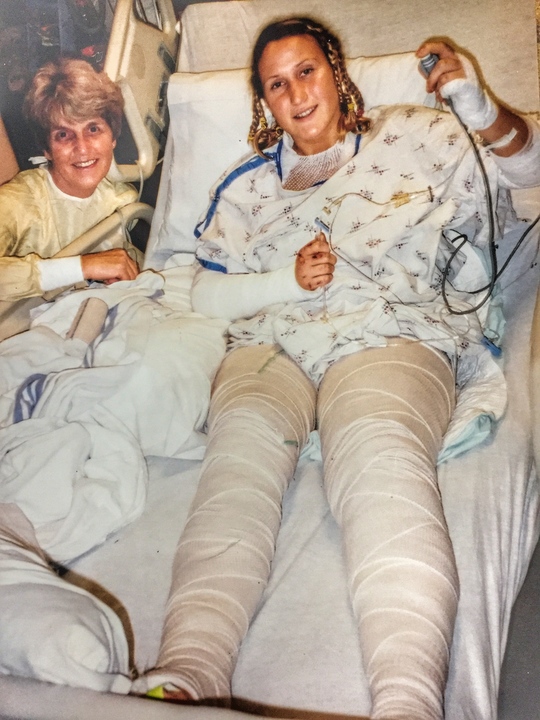 Elizabeth with her mother, who flew to be with her in the hospital while she remained in the ICU.

She spent three weeks in the ICU in Florida, and then her family flew her home to Nova Scotia to care for her during a year-long recovery process. 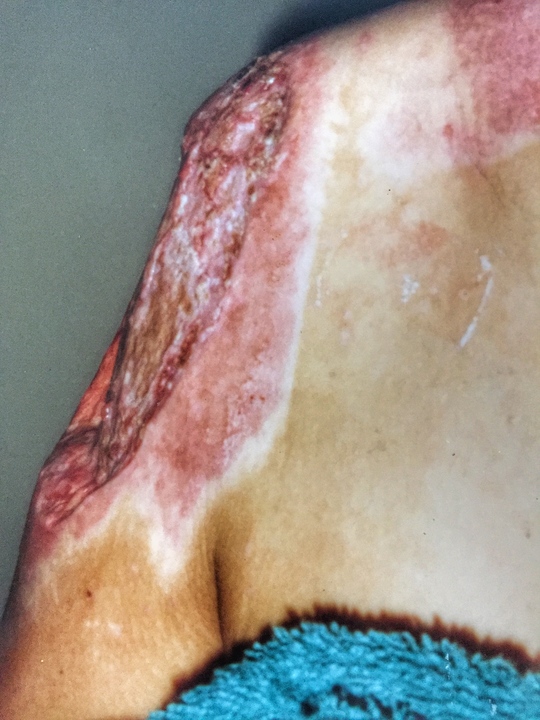 "My mom had to bathe me and wrap my burns every day for over six months. In the bath she had to take the dead skin out of the burns so that they would heal properly," Elizabeth said. "For six months I wore compression bandages on my legs. I couldn’t even lower my right leg down below my waist for three months...it was too much pain to bear."

Looking back, Elizabeth’s heart also breaks for her family during those difficult months.

"When you are younger you don't really realize the effect something like this can have on your parents, but now that I’m older I feel so horrible for putting them through that," Elizabeth said. "They never once scolded me; they were just so thankful that I was alive."

The worst feeling in the world...

One of the worst moments of her recovery came when Elizabeth saw her scars for the first time.

"One day after I got out of the hospital, I stood up in the bedroom after my mom had given me a bath and saw myself in the mirror for the first time since the accident. It was the worst feeling in the world," Elizabeth said. "I remember thinking that I’ll never have another boyfriend. I’ll never look normal again in a bathing suit. I was devastated."

I thought: "I'll never wear a bathing suit again." Read about her journey after the accident. Tweet this

It took some time for Elizabeth to accept that her scars were part of who she was now, particularly when other people brought attention to them. Curious children would often ask to touch her scars or would stare at her.

But by talking about her story with friends, family and even strangers, she was able to work through her dark feelings.

"I didn’t wear shorts for the first two years or so. I didn’t want to show the scars. But now it doesn’t affect me at all, my scars are just a part of who I am. They are proof that I’m a survivor," Elizabeth said.

She couldn't afford cosmetic surgery. But thanks to extensive skin graft surgeries and weightlifting, which increased her muscle tone and filled out her scars, they are much less noticeable today, Elizabeth said. However, she still shares her story often because she is proud that she survived such an ordeal and she hopes to serve as a cautionary tale to young people who may be mixing alcohol and motorcycles.

Alcohol influenced her to go on that fateful bike ride with a stranger, Elizabeth said, and she thinks that the driver may have been drinking too. "I am now so happy to talk to my younger friends about this and warn them about what happened to me. I see that it can have an impact on others."

Elizabeth was not able to work for a year after the accident and was facing hospital bills of more than $300,000.

However, the hospital agreed to absorb the cost since she did not have insurance and her parents were recently retired.

"I was so relieved. I could have been stuck paying those bills for the rest of my life and I would never have gotten ahead," she said.

After the accident Elizabeth contacted a friend who was an attorney to explore the possibility of a lawsuit against the owner/driver of the motorcycle. However, the driver said he had no insurance and virtually no assets, so Elizabeth never pursued a case, though her mother halfheartedly tried getting in touch with a lawyer in Gainesville.

"My family and I didn’t want to deal with it at the time. I just wanted to get back home to Canada and heal," Elizabeth said. "I was so young and inexperienced and we are from a small town. We have never dealt with anything like this and really had no idea where to start."

She remains close to her friend Eric but no longer leads the party lifestyle that landed her in that situation.

Elizabeth now lives in Atlanta, Georgia and works with horses - her life's passion. She is also in school to become a registered nurse. "The nurses had such an impact on me after my accident, they were amazing... I would love to help someone the way I was helped."

Although she is prepared to possibly treat motorcycle accident victims as a nurse, she does remain wary of motorcycles herself. "I cringe when I see anyone on a motorcycle. I haven’t been on one since!"

However, Elizabeth does credit the accident for turning her life around. "I am a strong believer in God and this accident made me cherish my life a lot more. The best years of my life happened well after the accident. I am really happy now and on the right track in my life." 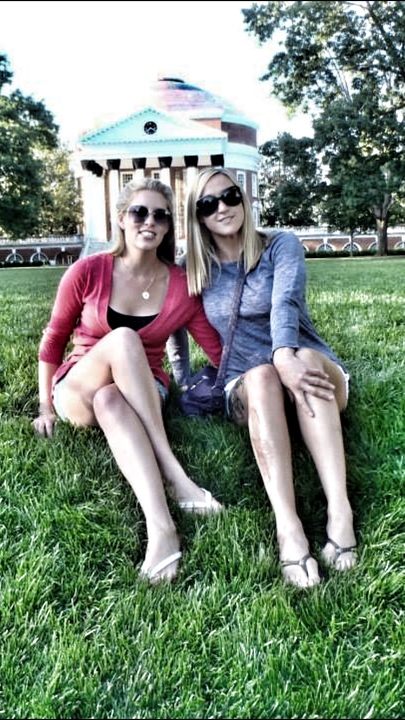 Elizabeth (right) with a friend more than 10 years after her motorcycle accident. The scars remain – see her right calf – but her life is full of hope. .

What happened to the driver of the motorcycle?

He fared much better than Elizabeth, though he also spent some time recovering in the burn unit in a Gainesville hospital.

He spoke with Elizabeth’s family, telling the story of that fateful night. He shared that his motorcycle was completely totaled, and that this was not his first accident. He said it wouldn’t be long before he’d be riding again.

Elizabeth’s family may have his quick thinking to thank for her surviving the crash. But years later they still wonder whether they should have pursued some sort of legal action to help cover the costs of the accident.

Have you been a rider on a motorcycle involved in a serious crash? How did you cope with your injuries? Please share your story below.

More about pursuing a legal case after your motorcycle accident