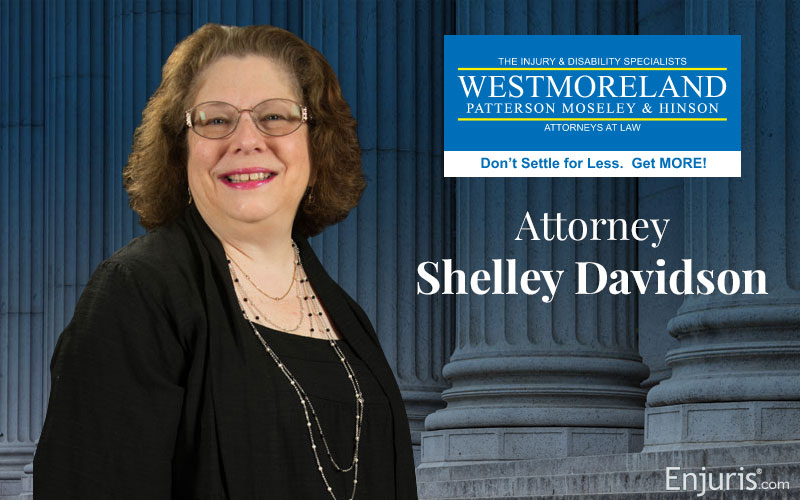 “The desire to help people,” says Shelley Davidson when asked what inspired her to practice law.

At Westmoreland, Patterson, Moseley & Hinson, where Shelley helps people with physical and mental disabilities receive the Social Security benefits they deserve, she is able to do just that.

Shelley grew up in Cochran, Georgia, just down the road from where she now practices in Macon.

“It was the family joke that I could argue a post to death,” Shelley says.

For most law students, the first year of law school is an exercise in treading water, but Shelley thrived.

“I was in a contracts class my first year,” Shelley recalls. “We had a case where a man was injured when he saved another man’s life. As a consequence, he lost his legs, and the man whose life he saved promised him that he would support him for the rest of his life. A few years later the man whose life was saved died, and the injured man who had no more money sued the estate. Our contracts professor asked us what advice we would give the client. I whispered to my roommate that I would tell him he did not have a leg to stand on. She immediately started laughing. So, the professor wanted to know what was the great advice. She said, it’s not my advice, but Ms. Davidson said ‘I’d tell him he didn’t have a leg to stand on.’ The whole class laughed, and the professor said the class was dismissed. I was a hero for the day!”

The quick wit Shelley exhibited in that first year of law school has served her well throughout her legal career.

Shelley served as a guest lecturer at numerous events sponsored by the National Organization of Social Security Claimants’ Representatives (NOSSCR) and the Legal Services Corporation (LSC). She is active in the State Bar of Georgia as well, serving as the chairperson of the Social Security Law Institute.

Nevertheless, Shelley says her greatest career decision was joining the law firm of Westmoreland, Patterson, Moseley & Hinson where she’s able to work with people she likes and do the kind of work that makes others' lives better.

Of course, there are challenging days.

“The job is not always glamorous like on television,” Shelley says. “I get disappointed with the results of some cases, but that only makes me want to work harder—not give up.”

Shelley’s clients have benefited from her fighting spirit.

Recounting a recent case, Shelley explained how she had to battle through 3 administrative hearings, a Social Security Appeals Council, and a federal district court hearing before ultimately securing 12 years of back pay for her client.

“It has made a huge difference in his life,” Shelley says.

Shelley is widely respected in the legal field for her work on Social Security disability cases. From 1996-1997, she served as president of the National Organization of Social Security Claimants’ Representative (NOSSCR)—the second attorney from her law firm to do so. NOSSCR is a national organization of lawyers and non-attorney representatives from all over the country who help disabled people obtain benefits and medical care.

Shelley’s days start around 7:00 in the morning and usually consist of attending hearings, writing briefs, and meeting with clients. But in those rare moments when she is “off the clock,” Shelley is active in her synagogue where she has served 2 terms as President of the Congregation Sha’arey Israel.

Shelley also likes to travel with her husband, see plays, and attend the symphony.

Shelley stresses that being disabled doesn’t always mean a person is eligible for benefits. It’s important, Shelley believes, for prospective clients to find an attorney who will be honest and realistic about their case.

“If someone promises you that they can win your case before they look at all the facts and the judge, I would run in the opposite direction.”

Q: What’s the hardest part of your job?

A: Telling someone I cannot help them.

Q: What’s the most rewarding part?

A: Making a difference in someone’s life.

Q: Do you have a favorite fictional attorney from books, television, or movies? If so, who is it?

Q: If you weren’t doing law, what would you be doing?

A: I’d be a psychologist or psychiatrist.