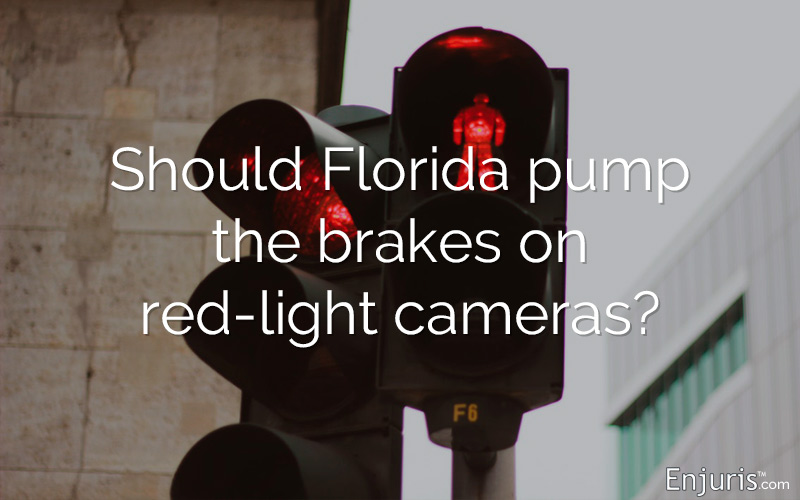 It’s a sunny afternoon in Aventura, Florida. You return home from running your dog at the Waterways Dog Park and find an envelope from a business called “American Traffic Solutions” in your mailbox. You open the envelope and there’s a citation accusing you of running a red light, along with a black and white photograph taken by an automated camera that purportedly captures the moment you ran the red light.

Is this legitimate? Is it legal? Can you just give the citation to your dog and forget you ever saw it?

Unfortunately for you, the Florida Supreme Court recently upheld a 2010 state law allowing local governments to use red-light cameras to catch traffic violators.

The ruling comes after several other states banned red-light cameras due to their ineffectiveness.

So, while communities in Florida have the right to use red-light cameras, there’s a growing sentiment that they shouldn’t.

The controversy behind red-light cameras

When it comes to red-light cameras, there are basically two camps.

One camp believes the cameras improve traffic safety and are therefore a necessary and important enforcement tool.

The other camp believes that red-light cameras are an overreach intended to generate revenue and, not only don’t work, but may actually cause more traffic accidents.

Facing factsAccording to 1 impact study, camera fines in Florida are estimated to bring in about $77 million annually, with about 58% of that money going to the state of Florida.

Other states have taken alarming steps to increase revenue. In Chicago, Illinois, officials were caught speeding up yellow lights so they would turn red quicker than the city’s minimum of 3 seconds. This led to 77,000 additional tickets being written in 2014, creating $8 million in new revenue for the city.

At the time of this article, the following states have banned the use of red-light cameras:

Do red-light cameras make the roads in Florida safer?

A report from the Florida Department of Highway Safety and Motor Vehicles found that intersections with red-light cameras saw increases in nearly every type of accident in the years since the cameras were installed.

Cities including Chicago, Philadelphia, and Washington, D.C., have all seen increases in crashes at intersections where red-light cameras have been installed.

On the other hand, proponents of red-light cameras point to other studies internationally and in the United States showing that, in general, injury crash reductions are likely to be in the range of 20–25% in clearly visible, fixed camera sites.

Are there better alternatives?

Whether or not there are better alternatives to red-light cameras is up for debate. However, there certainly are alternatives. These include:

Enjuris tip:For more on these and other potential alternatives to red-light cameras, visit the National Motorists Association.

Importantly, the law allows local governments to authorize companies to review information from a red-light camera before the traffic citation is issued. But what does “review” mean? Is it possible for a company to have too much power? These are some of the questions the Florida Supreme Court addressed in Luis Torres Jimenez v. State of Florida.

Luis Torres Jimenez received a traffic citation in Aventura, Florida, based on images from a red-light camera that showed him turning right while the traffic signal was red at an intersection marked no-turn-on-red.

Luis didn’t dispute that he committed a traffic infraction. Instead, he challenged the legality of the city’s enforcement program, which includes the use of American Traffic Solutions, a third-party company, to review images from the red-light cameras before sending potential violations to the police.

In short, Luis argued that allowing a company to review footage before sending it to police created an “unconstitutional filter” that gave too much enforcement power to the company.

In rejecting Luis’ argument, the Florida Supreme Court pointed out that the city doesn’t issue any citations unless and until an officer of the city weighs the evidence in the images and determines in their professional judgment that probable cause exists. To put it another way, the officers don’t just take American Traffic Solutions’ word that a violation occurred.

What does the recent Florida Supreme Court decision means for Florida drivers?

Red-light cameras are legal in Florida for the time being. This doesn’t mean that all cities have to use red-light cameras. It simply means that communities can use the cameras if they so choose–and most of them do.

If you’re involved in an accident, red-light camera evidence can potentially help or hurt your case. Either way, it’s to your benefit to reach out to an attorney.

What do you think about the use of red-light cameras?

Floridians tend to be strongly for or against the use of red-light cameras. Where do you stand? Leave a comment below.

If you’re a college student, submit your answer in the Tragos Sartes & Tragos 2019 scholarship essay competition for a chance to win a $1,000 scholarship.

Tragos, Sartes & Tragos is an award winning law firm in Clearwater, specializing in a wide range of personal injury cases — from car accidents to nursing home abuse to wrongful death and pedestrian/bicycle accidents. George Tragos, Peter Sartes, Peter Tragos and their highly skilled legal team fight hard to ensure you get what is deserved due to the negligence of someone else.