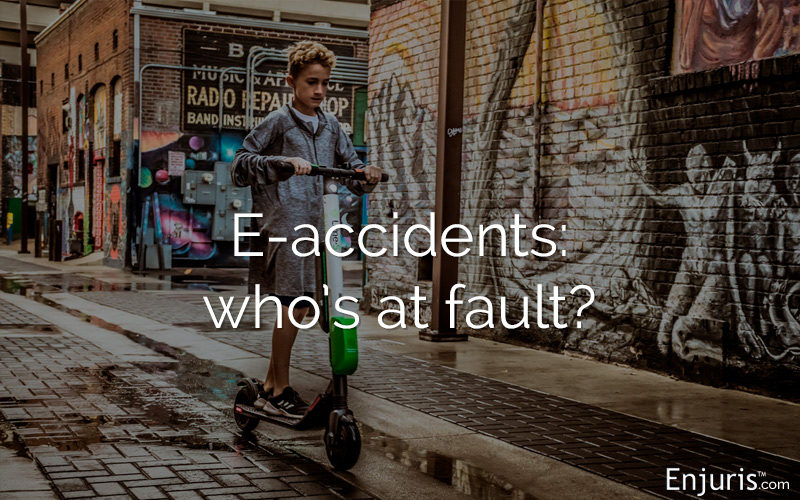 If you venture into downtown Denver today, you might think you’ve been transported into a future where gasoline has dried up and cars have been replaced with electric scooters.

That’s because the city of Denver recently issued permits allowing 5 companies (Lime, Bird, Lyft, Razor, and Spin) to operate fleets of roughly 2,000 electric scooters within the city limits. Users can download an app on their smartphone that allows them to find, reserve, unlock, and ride the scooters.

Though electric scooters, or “e-scooters,” are already extremely popular — and though they may help Denver meet its goal of reducing single-occupant vehicle commute trips from 73% to 50% by 2030 — they’re not without complications.

E-scooters offer very little in the way of protection, meaning accidents can result in serious injuries. The driver and passengers in a car are protected by airbags and seat belts, but there’s nothing standing between the e-scooter rider and the pavement.

What’s more, many users don’t understand how electric scooters are regulated and who’s liable when they’re involved in a crash.

Let’s take a closer look at some of these issues.

We aren’t the only ones to be concerned that the proliferation of electric scooters will lead to an increase in accidents. As Valorie Baxter, a physician assistant at Denver’s UCHealth Urgent Care who calls falls “gravity attacks,” explained:

"There’s been an increase in the use of these scooters in various cities and it’s a growing market in Denver. The more scooters that are out there, the more gravity attacks we will have."

So just how dangerous are scooters?

According to a report published by Consumer Reports, about 1,500 people around the United States were injured in accidents involving electric scooters in 2017. What’s more, the number is probably much higher, since many hospitals don’t track such injuries.

Facing FactsAt least 1,500 people in the US were injured in accidents involving electric scooters in 2017.

When e-scooters initially arrived in Denver, they were classified as “toy vehicles” and could only be operated on sidewalks. But the public consensus was that electric scooters traveled too fast to be ridden safely on sidewalks, so on January 7, 2019 the city council approved an ordinance requiring all electric scooters to be ridden in bike lanes on roads with speed limits of 30 mph or less.

If there’s no bike lane or road with a 30 mph speed limit, operators can ride on a sidewalk but must keep their speed below 6 mph.

In Denver, e-scooters must be ridden in bike lanes or on roads that are 30 mph or less. Only when neither option exists can a scooter be ridden on a sidewalk.  Tweet this

There are several other scooter-specific laws that operators must obey in Denver:

At the time of this article, Denver is the only city in Colorado where electric scooters are permitted, though companies are looking to expand to Fort Collins and Lakewood. As the use of e-scooters expands, other cities will need to pass their own regulations dealing with the operation of scooters.

Who’s liable if you’re involved in a scooter accident?

In general, liability for an electric scooter accident is based on negligence (just like other accident types).

In other words, whoever’s at fault for the accident will be responsible for paying damages. If more than 1 person is at fault (for example, if a motor vehicle driver and scooter operator are both partially at fault for an accident), Colorado’s modified comparative fault rules apply.

In rare cases, a defective scooter might be responsible for the accident. For example, the scooter’s accelerator might lock up, causing the operator to lose control and crash. In such cases, the manufacturer of the scooter can be sued in a product liability lawsuit.

Electric scooters provide Colorado residents with a fun, simple, and environmentally-friendly mode of transportation. However, as is the case with all modes of transportation, accidents do happen.

If you’ve been in an accident involving an electric scooter, contact an experienced lawyer who specializes in these types of cases as soon as possible.

When you’re up against a corporation or insurance company with a workers’ compensation claim, insurance dispute or personal injury matter, you can be confident in the Colorado attorney representing you at the Babcock Law Firm. We’re well versed in the tactics big companies use to try to prevent you from receiving the settlement or benefits you deserve, and we are fully committed to helping people just like you fight and win cases. View our profile and visit our website today.