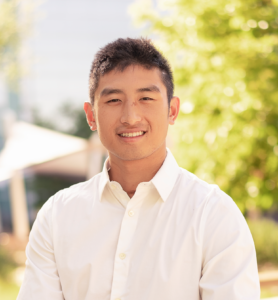 Brandon still smiling after a car accident that almost took his life. Read more about the incident and what he learned. (2018)

A devastating car accident and a traumatic brain injury

Today we welcome Brandon Leuangpaseuth, a writer from California. He tells us about his harrowing freeway incident, living with a traumatic brain injury and his long road to recovery after the car accident. Thanks, Brandon!

At the time, I was your typical 20-year-old college student.

I attended San Diego State University but still lived at home, so I felt like I was missing out on the full college experience.

A lot of my close friends were from San Diego as well, so we all enjoyed going on little adventures out of town on the weekends and during school breaks.

It was the start of Spring Break at San Diego State University. My college buddies and I were at a party in Los Angeles with some friends who went to school there. Drinks were flowing and everybody was having a good time. 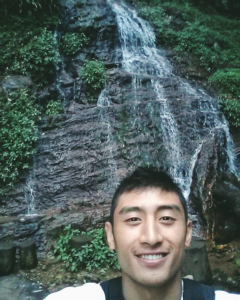 Brandon before the accident traveling through Thailand (2014)

When it got late, my friend Alan rounded everybody up to drive my car back to San Diego. He had work in the morning, so he was the designated driver.

While driving back, my car suddenly swerved to the side of the freeway, scraping against the center divider.

Alan had fallen asleep at the wheel.

He jolted awake and changed direction to the middle of the freeway, turning off the car and then soon realizing it would not turn back on. My car was inoperable, a sitting duck on the freeway.

I got out of the car and immediately panicked. “My parents are going to kill me!” I shouted as I looked at my damaged car. My friends all got out and stared at the broken-down vehicle. One of my friends said, “We should get the car out of the way.”

Alan guided the steering wheel while three of us began to push my car toward the breakdown lane. Within seconds, one friend shouted “CAR!” and jumped out of the line of fire.

An incoming car slammed into mine -- and then my car catapulted my friend and me through the air. Our bodies were launched across the freeway like slung dolls.

An incoming car slammed into mine -- and then my car catapulted my friend and me through the air. Our bodies were launched across the freeway like slung dolls. I was later told that I flew 20 feet, my body pounding on the concrete and smashing my nose, jaw and collarbone. My friend flew 30 feet, shattering the bones in his face and mangling his spinal cord.

My friend who escaped our fate ran to my body to see if I was okay. He told me later that he thought I was going to die. I was painted red with blood, and my body appeared to be disfigured. My friend was holding me in his arms when he looked up and his eyes widened, blinded by bright lights.

Another car was heading toward our bodies at full speed.

My friend quickly scrambled, dropping my body and jumping to the side in a last-ditch effort to avoid getting hit. At that moment the incoming driver saw him and attempted to swerve, but he still ran over his legs.

Alan was the only one who was not injured. He held my other battered friend in his arms when a passing driver finally halted, pulled over next to Alan and screamed, “Hey, are you all right? Do you need help?”

Tears streamed down his face as he sat in absolute horror, viewing the devastation he had caused.

I was taken to the closest hospital in an ambulance and admitted to the intensive care unit. Doctors put me into a two-week medically-induced coma, and I stayed in that hospital for a month before transferring to an intensive rehabilitation center in San Diego. I stayed there for a month, and I had outpatient therapy for another month. 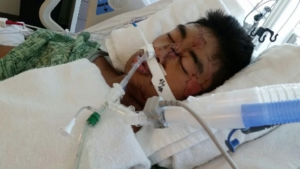 One friend fractured the bones in his face and received an incomplete spinal cord injury.

I had broken my jaw, nose, collarbone and received a traumatic brain injury.

My short-term memory was shot. I was terrified because I could not remember what I did the day before.

Imagine being only 20 years old and not being able to remember what you did the day before.

I was happy to be alive but boy, I had some dark thoughts. I remember sitting in the rehab center, depressed, contemplating my future with my abysmal memory. I thought I had been depressed before, but this was a whole different level of depression. My body felt like it weighed a thousand pounds. I struggled to get up every morning to do my rehab exercises. I just wanted to lay down all day and not get up.

How was I supposed to graduate from college? Who would hire me for a job? What would people think of me?

Thoughts flooded my head as I struggled with my poor memory.

I can still vividly remember knocking on the neurologist’s door at the rehab center. My eyes brimmed with fear and concern as I mumbled, “Is this going to last forever? Am I going to be like this forever?” Unable to remember things, fearing the future, refraining from drugs and alcohol to allow my brain to heal?

She told me that it would take a year to “kind of” get back to normal, but she didn’t know if I would ever be 100% normal again.

After I was released from the intensive rehabilitation center, I vowed to quit alcohol or any stimulants, like coffee, for a year to give my brain the best chance to recover.

When I returned home, I was a cocktail of emotions. I was depressed because of my memory, happy to be alive, sad for my friend’s injuries, lacking confidence because of my visual scars, in shock from the accident, and loved because of all my friends and family members who supported me.

I started seeing a therapist every week to help me cope and transition with my disability.

My friend who injured his spinal cord could not walk at the time, so I was grateful to be able to use my legs. I felt like I had my whole life swept from underneath me, but I was just grateful to be relatively healthy and to be given the opportunity to rebuild myself.

My hospital debt was about half a million dollars. My other friend’s debt was in the millions.

I am extremely grateful to have good health insurance because everybody involved in the accident had poor coverage. There was a lot of back and forth between my insurance company, the hospitals and my lawyer as to how the debt would be handled. After three-plus years, the hospitals finally dropped most of my debt because of the extent of my injuries.

Aside from poor memory, my traumatic brain injury destroyed my energy levels. I used to have so much energy, and now I can hardly stay up past 10:00 pm.

My TBI exhaustion would hit me like a truck, and I would not be able to function. My head would feel cloudy and I could not even think coherently. When I was finishing school, I would have to run to the library to nap between classes.

Every day after work, I nap before going to the gym. My TBI exhaustion still gives me problems to this day. 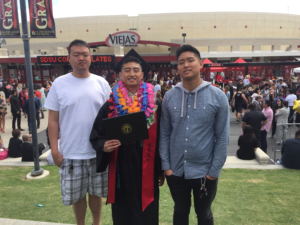 I graduated from San Diego State University in 2017 and now work full-time.

Now I see the car accident in a different light. It showed me how transient this life is and that any of us can be taken at any moment. Every day is a blessing. I feel like I should not be alive right now.

I would love to give some advice to people who are going through a traumatic event in their life.

If you are injured in an accident or were in a serious traumatic accident, take it one day at a time.

If you are injured in an accident or were in a serious traumatic accident, take it one day at a time. This was my motto after the accident. I would get really depressed when thinking about the worst-case scenarios and catastrophizing the rest of my life until I promised myself to take it one day at a time. I just focused on doing the best I could to recover and adapt to my injuries, today. This helped me to stop thinking so much about the future and to hone in on what I can control in the present.

The second piece of advice is to be grateful for what you have. I kind of think it’s funny, because when I had great health (I was in pretty good shape from wrestling in high school), a great group of friends and a loving family, I always wanted more. Now, just having my legs is enough. I know it can be hard, but stay positive and keep pushing through. You will eventually make it through. I am absolutely sure of it. 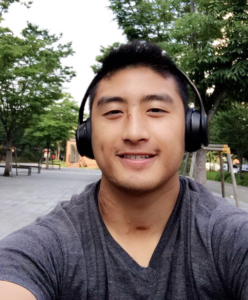 Brandon Leuangpaseuth is a writer from San Diego, CA, who helps various law firms like McGilberry & Shirer, LLP with their public relations. You can connect with him on Linkedin @ bleuangpaseuth.