TAMPA, Fla. – May 22, 2017 – For the first time, women make up the majority of law school students pursuing a juris doctor degree. This could be an important development for the personal injury field, where there remains a lack of female tort attorneys in leadership roles.

Enjuris, a legal resource for accident victims, compiled data on law schools and regions where women are currently enrolled at higher levels than their male counterparts. 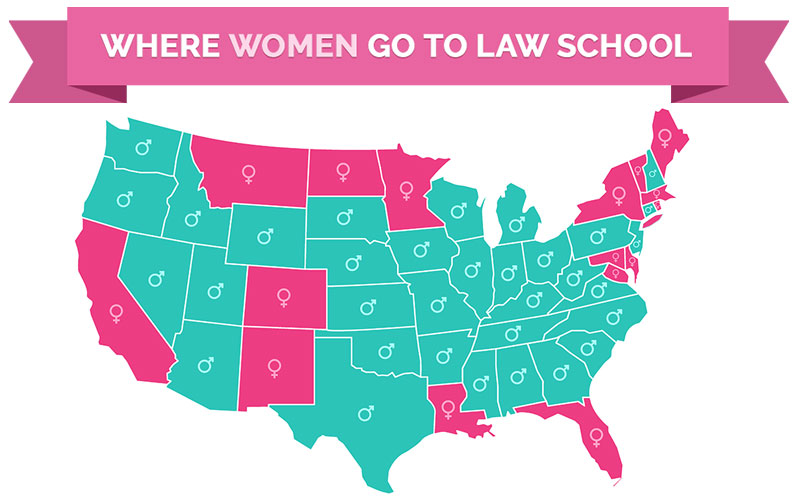 Although women now comprise 50.9% of J.D. students, enrollment data shows a great disparity among law schools: nearly 70% of J.D. students at Howard University are female while only 36.5% at the Appalachian School of Law are women.

The top U.S. law schools by female enrollment (over 60%) are:

Additionally, female law students were found to be concentrated in certain regions and states.

"Thirty-seven percent of women enrolled in J.D. programs can be found on the East Coast," says Lisa Banks, executive editor at Enjuris. "New York alone enrolls 10.57% of women studying for a J.D. degree."

Nine of Florida's 12 law schools enroll more women than men, accounting for 7.76% of women studying for a J.D. degree.

On the West Coast, California law schools account for 12.34% of female J.D. students.

Sixteen states and Puerto Rico were found to have more women than men law school students.

The infographic and more gender enrollment data, including data for USA Today's top ranked law schools, can be found on Enjuris.com at https://www.enjuris.com/students/ranking-universities/

Enjuris is a collection of resources to help people at a tough time in their lives: after an accident. It is a place for people to share their stories, download helpful guides and find a lawyer specializing in personal injury law. Enjuris aims to support those making a difference in their communities, including lawyers, students, families and caregivers.