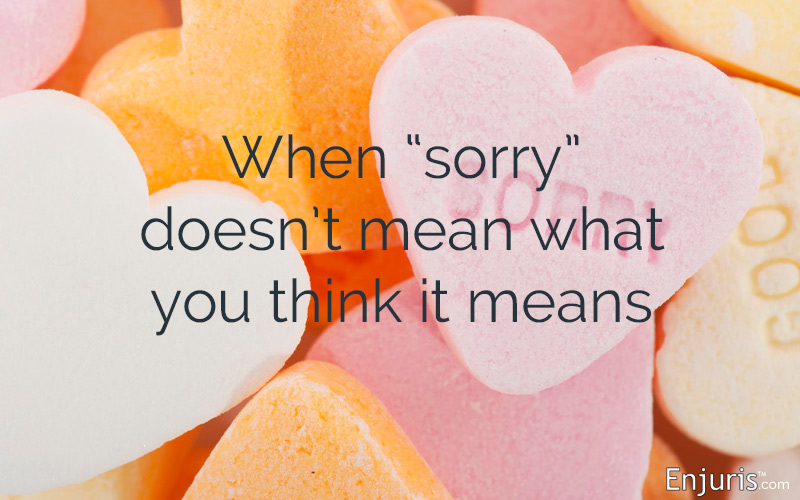 We want to believe that if someone says, “I’m sorry,” they really mean it.

But if the apology comes from an insurance company after you’ve been in a truck accident, chances are it’s not truly sincere.

Don’t be swayed by an apology

Many insurance companies will use an apology program, which is a specific set of guidelines used to train adjusters to “apologize” to an accident victim as a way of avoiding claims or convincing you to settle for less than your claim is worth.

Here’s how it works:

You were in a collision with a commercial truck. Later that day, you receive a call from the trucking company’s insurer. A pleasant-sounding adjuster says, “We’re so sorry you got hurt.” She then offers to send you a check for the full replacement value of your car.

Or maybe she’ll say that she’s going to make you a “reasonable” settlement so that things don’t get messy by hiring lawyers.

But there’s a difference between empathy and apology.

Often, an adjuster is trained to express empathy that sounds like an apology without actually apologizing — because doing so would acknowledge fault. Just because someone uses the word “sorry” doesn’t mean they’re making an apology or admitting responsibility.

Resist the temptation to be taken in by a kind-sounding voice and a financial offer. They’re not calling you to be nice. They’re calling because studies show that when an injured person believes they’ve received an apology, they’re more likely to settle the claim for less than they deserve.

In fact, these apology programs are so successful that they’re also being used in many hospitals for medical malpractice situations.

One study showed that an apology “gave the patient a sense of satisfaction and closure, which led to faster settlements and less demand for damages.” In other words, it reduces the amount of medical malpractice payments.

The claims adjuster might also call to “check” on you. She might say she wants to see how you’re doing following the crash. The best way to answer is not at all. Even if you say, “I’m fine,” it can come back to haunt you if you wind up in court. By telling the adjuster you’re “fine” or “good,” you’re letting them know that you’re not injured.

Even if you think you are fine or good, keep it to yourself. You don’t want to lie, but you also want to protect yourself in case symptoms of an injury crop up later, which does happen.

Enjuris tip: Once you accept an insurance settlement offer, you can’t change your mind. You might end up with more injuries or expenses than you originally thought, and your costs could end up being higher than anticipated. But once that settlement agreement is signed, the rest is up to you. Always consult your lawyer before accepting any settlement offer from an insurer.

The insurer is responsible for paying out the claims, regardless of how much they make in premiums. Because trucking accidents are often more serious than accidents between passenger cars, these insurance claims can amount to large sums of money.

Here are a few things to keep in mind if you’re confronted by the insurance company:

How to work with your own insurance company

There are going to be two (or more) insurance companies involved in the claim process. In a truck accident, there can be several parties involved.

Your insurance company has its own best interests in mind, not yours. The objective is to pay out as little as possible on any claim because every payment it makes costs the company money. If there’s any liability on your part, that affects how it negotiates with the opposing insurance company.

Your insurance adjuster isn’t allowed to give you legal advice, but that doesn’t mean they won’t try. Tweet this

When to hire a personal injury lawyer for a truck accident

When should you hire a personal injury lawyer following a truck accident?

That way, when the insurance company calls, you can tell them to talk to your attorney directly.

In what could be a complicated case with a lot of insurance companies involved, your lawyer is the one person you can count on to represent YOU. Your lawyer will try to minimize your liability, manage the communication, conduct negotiations, and work with insurers to get the highest possible settlement for you.

And like the insurance company, your lawyer knows what your case is actually worth. Your attorney knows the deceptive tactics and strategies that adjusters use to get you to agree to a lowball settlement offer. They know exactly how much time you have to file a lawsuit.

Unlike the insurance company, though, your lawyer’s job is to advocate for YOU and get you the money you need to cover your bills and expenses. Your lawyer won’t settle for an amount that’s lower than what you deserve. If the insurance company won’t agree to the desired settlement, you can file a lawsuit. Your lawyer will always advise you of what your options are and provide guidance through the entire process.

Consider the Enjuris Personal Injury Law Firm Directory your starting guide to finding the lawyer who’s going to be there for you every step of the way.