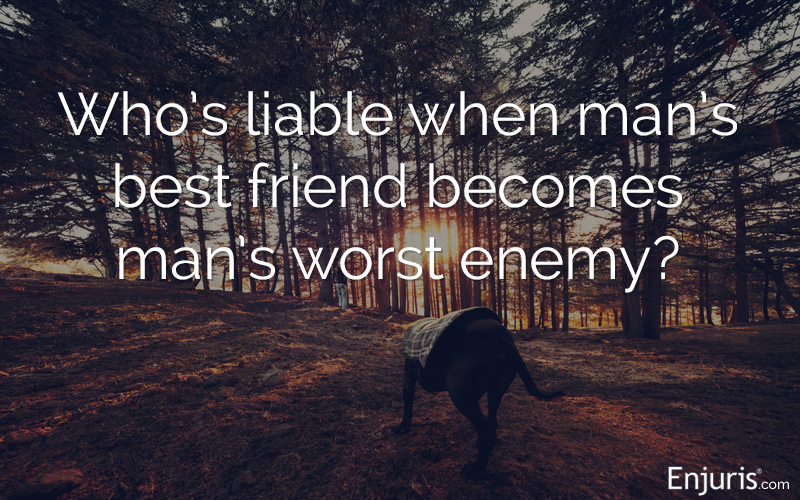 When is a dog owner liable for a dog bite in the Volunteer State?

Table of Contents + show
When is a dog owner liable for a dog bite in the Volunteer State?
Tennessee’s dog bite laws
Defenses to dog bite claims
How long do you have to file a dog bite lawsuit?
What damages can be recovered?
What about other animals?
Steps to take if you’re injured by a dog in Tennessee
Tennessee is different than most states when it comes to dog bite liability. Find out what laws apply to a dog bite and what steps you should take following a dog bite.

The state animal of Tennessee is the raccoon, but the dog might be more appropriate.

According to the American Veterinary Medical Association (AVMA), Tennessee ranks in the top 10 states with the highest percentage of dog owners. Currently, 47% of households (roughly 1.16 million homes) in Tennessee have at least 1 dog.

All states have laws that address when a dog owner can be held liable in the event their dog bites someone.

So how does Tennessee—a state packed with dogs and dog lovers—handle dog-bite liability?

When it comes to dog bite laws, most states apply 1 of 2 laws:

Tennessee is unique in that it applies both strict liability and the one-bite rule, depending on where the dog bite occurred.

Generally, strict liability applies when a plaintiff is bitten by a dog in a public or private place, so long as the plaintiff wasn’t trespassing.

The one-bite rule applies when a plaintiff is bitten by a dog on a farm, inside a private residence, or inside some other non-commercial property that the dog’s owner rents, leases, or occupies with permission.

Unlike most states, Tennessee’s dog bite laws don’t just apply to dog bites. The strict liability and one-bite laws apply to “any damages suffered by a person.” For example, if a dog charges you on a public street and knocks you down (but doesn’t bite you), the owner can still be held liable for any injuries that you sustain as a result of being knocked down.

Determining liability in a dog bite case is generally pretty straightforward. There are only a few defenses that might apply:

In Tennessee, a dog owner won’t generally be held liable if their dog bites a trespasser or attacker. Tweet this

How long do you have to file a dog bite lawsuit?

Tennessee has one of the strictest statutes of limitations in the country. For personal injury lawsuits (including dog bite claims), a plaintiff must file their lawsuit within 1 year of being injured by the dog.

Enjuris tip: Learn more about how lawyers and insurance companies estimate the value of a personal injury case.

What about other animals?

There are a number of laws in Tennessee that apply to other animals. These laws address everything from animal cruelty to owning exotic pets and have been compiled by the University of Tennessee Institute of Agriculture.

A complete review of these laws is beyond the scope of this article. However, you should be aware that you can sue the owner of an animal (regardless of whether there’s a specific statute) for negligence if the owner’s carelessness causes your injury.

You should also keep in mind that, in addition to statewide statutes, some counties have their own regulations regarding animals. For example, Clarksville Code of Ordinance 3-203 makes it unlawful for any person owning a dangerous or mischievous animal to allow it to run at large (i.e., unleashed).

Dog bite claims are typically difficult to prove. What’s more, you only have 1 year to file a lawsuit. Fortunately, there are a few simple steps you can take to increase your chances of success:

Your health should be your top priority. If you need emergency medical attention, call an ambulance or have someone call one for you. Even if you don’t need emergency medical attention, it’s a good idea to see a doctor following a dog bite or animal attack. This will help prevent a minor injury from becoming worse. What’s more, evidence that you saw a doctor soon after the dog bite will help any future lawsuit.

Step 2: Report the dog bite to the authorities

Tennessee doesn’t have a law requiring you to report a dog bite. Nevertheless, it’s a good idea to report a dog bite to the authorities (the police, animal control, or even your local health department depending on where you live). A record of a report will help your case if you later file a lawsuit. Plus, the authorities may conduct an investigation that could help support your claim.

If you’re able to do so, collect as much evidence of the attack as you can. This might include:

The statute of limitations for dog bite lawsuits is only 1 year. Accordingly, it’s important to meet with an attorney as soon as possible. Most initial consultations are free and the attorney will be able to help you preserve your rights.

If you need help finding an attorney near you, visit our free online lawyer directory.