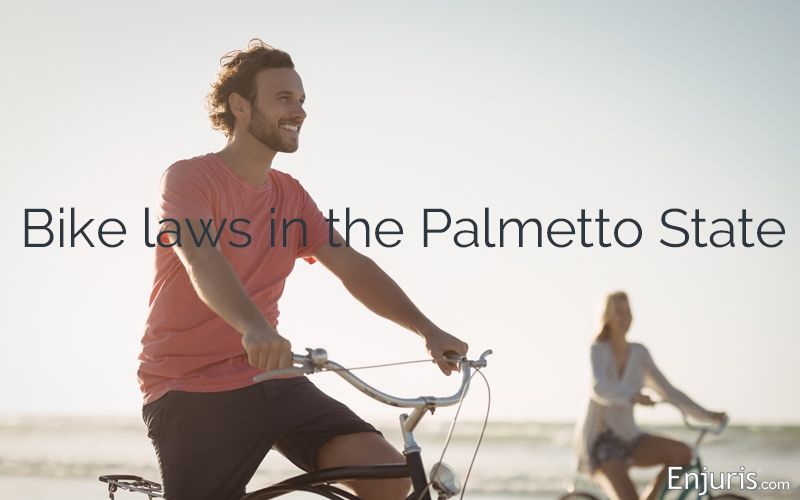 Who’s liable when a bike and motor vehicle collide?

The subtropical climate, ocean views, and hundreds of miles of multi-use trails would seem to make South Carolina a paradise for bicyclists. However, South Carolina is considered one of the least bike-friendly states in the country due in large part to the high number of fatal bicycle accidents every year.

Facing factsThe League of American Bicyclists ranks South Carolina as the 42nd most bike-friendly state in the country.

In this article, we’ll take a look at bicycle accidents in the Palmetto State, including the laws that govern bicycle use and the parties who may be liable for a bike accident.

In the United States, more than 2 people are killed on a bicycle every day.

According to the National Highway Traffic Safety Administration (NHTSA), there are roughly 21.1 bike-accident fatalities per 10,000 bike commuters every year in the Palmetto State.

Of course, not every bike accident results in a fatality, but a vast majority result in injury. On average there are 508 reported bicycle crashes every year in South Carolina. Of these crashes:

South Carolina requires bicyclists to follow the same rules and regulations as motor vehicle drivers. This means that bicyclists are required to stop for traffic lights and stop signs.

In South Carolina, bicyclists are not required by law to wear helmets.

With that being said, research has consistently shown that wearing a bike helmet greatly reduces the risk of serious head injury and death. Over a 10-year period, 78% of adult bicyclists and 88% of young riders who suffered head and neck injuries were not wearing helmets, according to a study published in the journal of Brain Injury.

What about electric bikes?

The popularity of electric bicycles (“e-bikes”) has soared in recent years. According to a 2018 bicycle industry analysis, e-bikes now make up 10% of overall bike sales in the United States.

Most e-bikes are “pedal-assist,” meaning the rider must be pedaling for the electric motor to engage. Some e-bikes, however, are equipped with a throttle that allows the bike to be propelled without pedaling.

South Carolina is one of a handful of states that do NOT have any laws specifically addressing e-bikes. As a result, an e-bike might be considered an electric personal assistive mobility device, a bicycle, a moped, or a passenger car under the law depending on the specific design of the e-bike.

The lack of clear regulation has made it virtually impossible for e-bike riders to know what laws they’re supposed to follow. Organizations, such as PeopleForBikes, have recognized this problem and lobbied for states to pass model e-bike legislation. Thus far, 12 states have adopted the model legislation.

Notably, the federal government has defined and regulated e-bikes. However, federal laws only address the safety standards e-bikes must meet.

Who’s at fault for a bicycle accident in South Carolina?

Most personal injury claims made by bicyclists against motor vehicle drivers are negligence claims. To prove negligence in South Carolina, a bicyclist must prove that:

The jury ruled in favor of the bicyclist.

Of course, not all accidents are caused by motor vehicle drivers. Other responsible parties might include:

Sometimes both the bicyclist and the motor vehicle driver are at fault for an accident.

South Carolina is a modified comparative fault state, meaning that the plaintiff’s damages are reduced by their percentage of fault. What’s more, if the plaintiff is considered more than 50% at fault for the accident, the plaintiff is barred from recovering any damages.

What to do if you’ve been in a bike crash

Your health should be your first priority. What’s more, South Carolina law requires anyone involved in an accident to call 9-1-1 if someone is injured.

Keep in mind that injuries don’t always show symptoms right away. Even if you don’t think you’ve been injured, it’s a good idea to get yourself checked out by a doctor.

Be sure to keep track of all your medical expenses, as well as the day-to-day impact of your injuries. Good record-keeping can help ensure you recover the damages you deserve. The following resources can help:

The police will conduct a minor investigation and write a report that could support your injury claim. What’s more, the police can help diffuse the all-too-common instances of road rage between motor vehicle drivers and bicyclists after an accident.

Witnesses are notoriously difficult to locate after an accident. If you’re able to do so safely, gather the contact information of anyone at the scene who may have witnessed any part of the accident. Additionally, you’ll want to take photographs of the scene of the accident and any physical injuries or property damage.

Most initial consultations are free, so it’s almost always a good idea to meet with a personal injury attorney to discuss your legal options.

Ready to meet with a personal injury attorney near you? Use our free online directory.