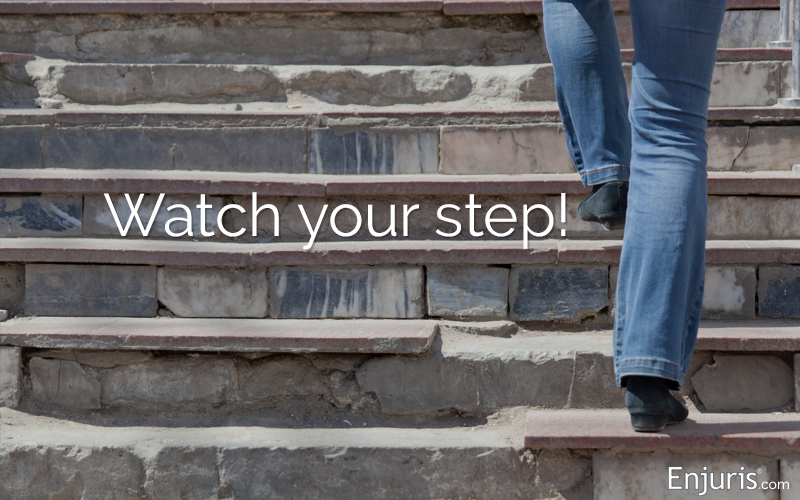 Can I sue for falling down the stairs?

More than 1 million people in the United States are treated in emergency rooms for stair-related injuries every year. If you fell down the stairs on someone else’s property, you may be able to sue the property owner to recover medical expenses and other damages.

Let’s take a look at stair-related accidents and when a personal injury lawsuit may be appropriate.

Here are some common causes of staircase accidents:

Enjuris tip:When someone slips on stairs and files a personal injury lawsuit against the property owner, an expert (such as a human factors psychologist or civil engineer) is typically hired to test the COF of the steps. This helps determine whether the materials used were inherently slippery or whether some other factor caused the plaintiff to slip.

Common injuries from falling down stairs

A study published in The American Journal of Emergency Medicine analyzed data from the National Electronic Injury Surveillance System and found that 24 million patients were treated in emergency departments for stair-related injuries during a 23-year period.

The most common types of injuries were:

The most frequently injured body regions were:

Fortunately, almost 94% of patients were treated and released from the hospital, but 6% were admitted for treatment of fractures or head injuries.

“Stairs are a common source of injury among all ages, and the frequency and rate of stair-related injuries are increasing,” said Dr. Gary Smith of Nationwide Children’s Hospital in Columbus, Ohio.

Although anyone can fall down the stairs, adults over age 85 and children under 3 years old have the highest rate of stair-related injuries.

When to see a doctor after a fall

It’s never a bad idea to get checked out by a doctor after falling down the stairs. However, there are certain symptoms that may indicate a serious condition. If you experience any of these symptoms, you should get yourself to the emergency room as soon as possible:

When can you file a lawsuit for falling down stairs?

To file a lawsuit against a property owner for falling down their stairs, you need to prove that the property owner or their employee was responsible for your fall (through their actions or inactions).

In most states, premises liability laws and building codes require property owners to keep stairs in a reasonably safe condition. Just how safe depends on the type of property. For example, commercial establishments must generally keep their stairs in a safer condition than residential homeowners.

To hold a property owner legally responsible for your injuries, you have to prove 1 of the following:

Angela is leaving an Italian restaurant at night when she steps onto a broken step and falls. She severely fractures her leg and sues the restaurant. At trial, Angela introduces evidence that the manager of the restaurant was told about the broken step the morning of her fall but failed to warn customers.

In this example, the restaurant would likely be held liable for Angela’s damages because the restaurant knew about the dangerous condition and failed to do anything about it.

On the other hand, if the restaurant wasn’t told about the broken step and the step had been broken just minutes before Angela fell, the restaurant probably wouldn’t be held liable because the restaurant could not reasonably be expected to know about and repair a dangerous condition so soon after it appeared.

The role of insurance in stair accidents

The fact that insurance coverage may exist means you stand a better chance of receiving compensation for your injuries. However, you’ll still need to prove liability, as insurance companies have insurance defense lawyers ready to contest your claim.

What to do after you fall down stairs

If you fall down the stairs on someone else’s property, there are a few steps you can take to improve your chances of recovering damages down the road:

Finally, if you suffered an injury as a result of falling down someone else’s stairs, it’s a good idea to reach out to a personal injury attorney. Most initial consultations are free and you can find an attorney in your area using our free online directory.