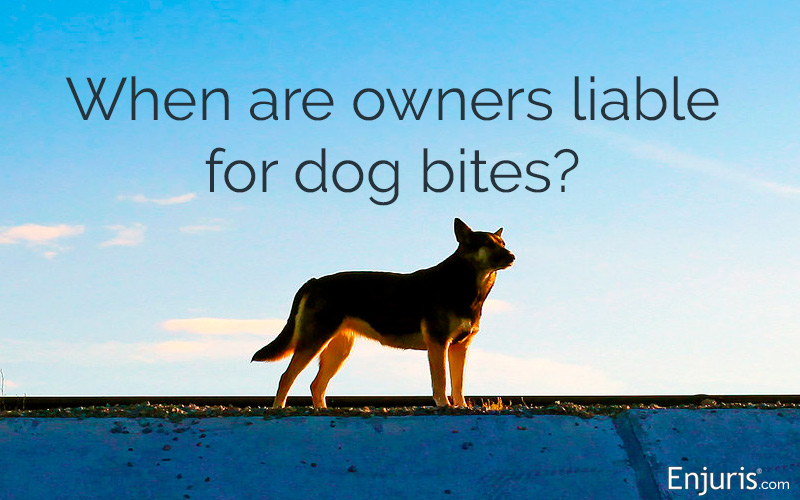 How liability works in all 50 states

Table of Contents + show
How liability works in all 50 states
Dog bite statistics
Dog bite injuries
When are dog owners liable for dog bites?
Defenses to dog bite claims
Where to file your lawsuit
Non-legal recourse
Non-bite injuries
Dog-bite injuries are more common than you might think. Fortunately, every state has laws in place that address when a dog owner can be held liable for a dog bite.

According to the American Pet Products Association, there are approximately 90 million dogs in the United States. This means that there are more dogs in America than there are people in France and Australia combined. Roughly 49% of all American households have at least one dog and 43% of all non-pet owners plan to own a pet in the future.

With so many dogs in so many homes, it’s easy to forget that dogs are animals. Unfortunately, reminders can come in the form of vicious dog bites.

There are more dogs in America than there are people in France and Australia combined. Tweet this

According to recent estimates, more than 4.5 million people are bitten by a dog every year. In addition to being painful, dog bites can cause injuries and infections. The Centers for Disease Control and Prevention (CDC) report that roughly 1 in 5 people bitten by dogs require medical attention.

Here are some other dog bite statistics:

Dogs come in all shapes and sizes, from chihuahuas (3-6 pounds) to English Mastiffs (up to 350 pounds). As a result, dog bite injuries can vary tremendously.

Here are some of the most common dog bite injuries:

When are dog owners liable for dog bites?

All 50 states have laws in place that determine when dog owners are liable for dog bites. In most cases, states have adopted strict liability laws, one-bite laws, or simply chosen to apply negligence laws. Check out the table at the end of this article to find out where your state falls.

In states that have adopted strict liability laws, a dog owner is liable for the injuries caused by their dog so long as the injured person can prove that:

In states that have adopted one-bite laws, a dog owner isn’t liable for a dog bite unless the injured person can prove that the owner should have known about their dog’s violent propensities.

Janet has had her golden retriever Lucy for 7 years. During those 7 years, Lucy has never bitten anyone or acted violently. Nevertheless, one morning while Janet is walking the dog down the street, Lucy pulls away from Janet and bites a passing child.

Some states don’t have specific statutes addressing dog bites and instead apply the normal negligence laws to dog bite cases. In these states, a person injured by a dog bite needs to prove that:

To stick with the example above, Janet owes a duty to take reasonable care to avoid hurting others. It doesn’t appear that Janet did anything to breach that duty and therefore she likely wouldn’t be found negligent. However, Janet might be found negligent if she failed to leash her dog (particularly if a leash law was in place).

Dog bite cases tend to be pretty straightforward in strict liability states. The only available defenses are:

In one-bite states, however, cases can be a little less clear. This is because the focus of litigation is generally on whether the dog exhibited violent behavior before the bite and whether the owner knew or should have known about these behaviors.

Any of the following might be used to prove that a dog exhibited violent behavior before the attack:

Where to file your lawsuit

If you suffered a serious dog bite injury, it’s probably best to file your lawsuit in a state court of general jurisdiction.

On the other hand, if your damages are low, it may be appropriate to file your lawsuit in a small claims court. Small claims courts limit or “cap” the amount of damages you can recover. The dollar limit depends on the state but is generally somewhere around $10,000. Small claims courts tend to be less formal than other courts and lawyers aren’t typically involved (in some states, lawyers are strictly prohibited).

Enjuris tip: Find out more about small claims courts, including the damage limits for each state.

It may not be necessary to file a personal injury lawsuit after suffering a dog bite. Injuries caused by dogs are normally covered under the dog owner’s homeowners insurance policy.

Keep in mind that the insurance company will likely investigate the claim, so be prepared to provide any evidence of the attack, including medical records. If the insurance company denies your claim or gives you a lowball offer, consider reaching out to an experienced personal injury attorney.

We’ve already established that you can recover damages if you’re bitten by a dog.

But what if you don’t think that’s enough? What if you’re worried the dog will strike again?

The answer depends on the state (and even the county) in which you were bitten.

In most states, individual counties have the authority to pass ordinances addressing how they control dangerous dogs.

Let’s use Cascade County, Montana as an example.

In Cascade County, if a dog has bitten people on 3 separate occasions (or if any 1 dog bite was particularly violent), the dog may be put to death by an animal control officer following a hearing to determine if the action is necessary for the safety of the citizens of the community.

Enjuris tip: Always report the dog bite to your local animal services office. This helps create a record and also covers you if your state requires citizens to report dog bites.

But what happens if a dog causes you injury without biting you, such as knocking you over or causing you to crash your car?

If a dog injures you without biting you, you’ll need to file a negligence lawsuit.