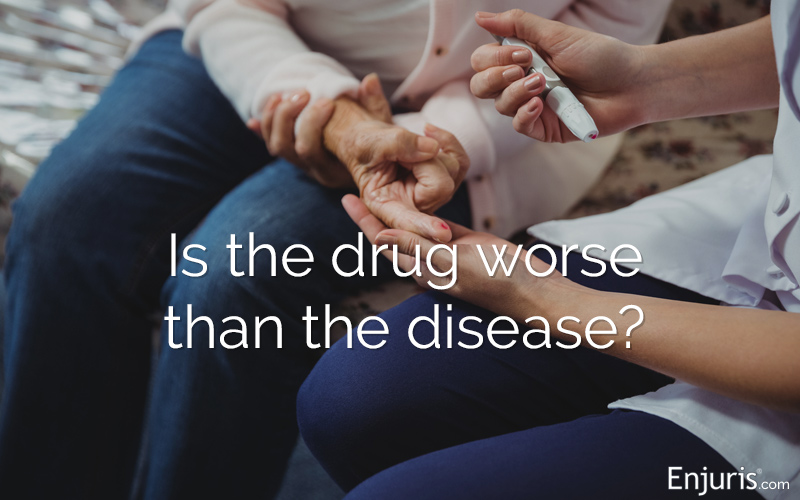 Should you contact a pharmaceutical liability lawyer if you’ve ingested the popular diabetes medication?

Table of Contents + show
Should you contact a pharmaceutical liability lawyer if you’ve ingested the popular diabetes medication?
What is metformin?
What are the side effects of metformin?
FDA metformin recall
Does metformin cause cancer?
Metformin lawsuit update
Should I contact an attorney if I’ve taken metformin?
Connect to top-rated lawyers in seconds using our comprehensive national directory
Several companies have voluntarily recalled metformin due to safety concerns. Find out whether the drug is dangerous, the status of the recalls and lawsuits, and whether you should contact an attorney.

More than 34 million Americans suffer from type 2 diabetes (roughly 1 in 10).

The majority of these individuals have been prescribed metformin, a generic drug used to treat type 2 diabetes.

In 2020, the FDA found unacceptable levels of a human carcinogen (an agent that may cause cancer in humans) in certain batches of metformin.

In this article, we’ll take a closer look at metformin, the FDA’s response to its findings, and the status of metformin lawsuits in the United States.

Metformin (MET) is a prescription drug used to treat type 2 diabetes. The drug is the most widely prescribed diabetes medication worldwide, with an estimated 40 million prescriptions dispensed every year in the U.S. alone.

The drug works by reducing the amount of sugar your liver releases into your bloodstream. It also helps your body respond to insulin (the hormone that controls the level of sugar in your blood).

Metformin is administered orally (typically 500-2550 mg per day) with a meal. Extended-release tablets are typically taken daily with an evening meal and swallowed with a full glass of water.

Metformin was approved by the United States Food and Drug Administration in 1994.

Metformin has several non-FDA-approved uses, including the treatment of gestational diabetes, management of antipsychotic-induced weight gain, type 2 diabetes prevention, and the treatment and prevention of polycystic ovary syndrome (PCOS).

What are the side effects of metformin?

Metformin has some minor side effects. The most common side effects (which occur in roughly 5% of people taking the drug) include:

Other less common side effects include:

The FDA recently announced that several companies have voluntarily recalled metformin. Let’s take a look at the timeline leading up to the recalls:

December 5, 2019: The FDA announced that some metformin diabetes medicines in other countries were reported to contain low levels of N-Nitrosodimethylamine (NDMA). NDMA is a human carcinogen that may cause cancer. The announcement stated that the FDA would begin investigating whether metformin in the U.S. market contains NDMA.

May 28, 2020: The FDA concluded its investigation and announced that it found unacceptable levels of NDMA in several lots of extended-release metformin.

In the weeks that followed, several other companies recalled lots of extended-release metformin.

Enjuris tip:You can check the FDA’s metformin recall website for the most recent recall updates.

Does metformin cause cancer?

The FDA found that some batches of extended-release metformin contain small amounts of NDMA.

FDA testing has NOT shown NDMA in immediate-release (IR) metformin products (the most commonly prescribed type of metformin).

There are all sorts of reasons why NDMA might end up in medication. For example, the FDA has noted that the source of NDMA can be related to the drug manufacturing process, the conditions in which the drug is stored or packaged, or even as a result of the drug interacting with the body.

But what is NDMA and does it cause cancer?

NDMA is a common contaminant found in water and foods. Everyone is exposed to some level of NDMA. The FDA and the international scientific community do not expect it to cause harm when ingested at low levels.

However, if a person is exposed to NDMA at above-acceptable levels over a long period of time, some studies indicate that the person may be more likely to develop cancer.

Interestingly, some studies suggest that metformin may help prevent certain cancers and increase the response to treatment in cancer cells when using radiotherapy and chemotherapy.

The bottom line is that no one knows for certain whether taking metformin will increase your risk of contracting cancer.

The FDA advises that patients taking recalled extended-release metformin should continue taking it until a doctor or pharmacist gives them a replacement or a different treatment option. The FDA further recommends that health care professionals continue to prescribe metformin when clinically appropriate.

As is often the case when a drug is recalled for safety concerns, plaintiffs have begun filing metformin-related lawsuits.

The lawsuits allege that metformin contains high levels of NDMA and that manufacturers failed to warn patients and doctors about the risks associated with NDMA.

Let’s take a look at one such lawsuit:

Kristin Wineinger filed a class-action lawsuit in the U.S. District Court for the District of New Jersey against Granules Pharmaceuticals.

The lawsuit alleges that Granules continued to market metformin as “safe and effective” despite research “detecting high levels of NDMA in specific batches of prescription drug products containing metformin, including metformin manufactured by Granules.”

Should I contact an attorney if I’ve taken metformin?

If you ingested metformin and later contracted cancer, you should absolutely contact a pharmaceutical liability attorney to discuss the possibility of filing a lawsuit to recover damages, including the medical expenses and lost wages associated with your cancer.

If you ingested metformin but have not developed cancer, it may still be worth contacting an attorney. You might be able to file a lawsuit or join a class-action lawsuit to recover the cost of the prescription.

You can find an attorney near you using our free online directory. Most initial consultations are free.