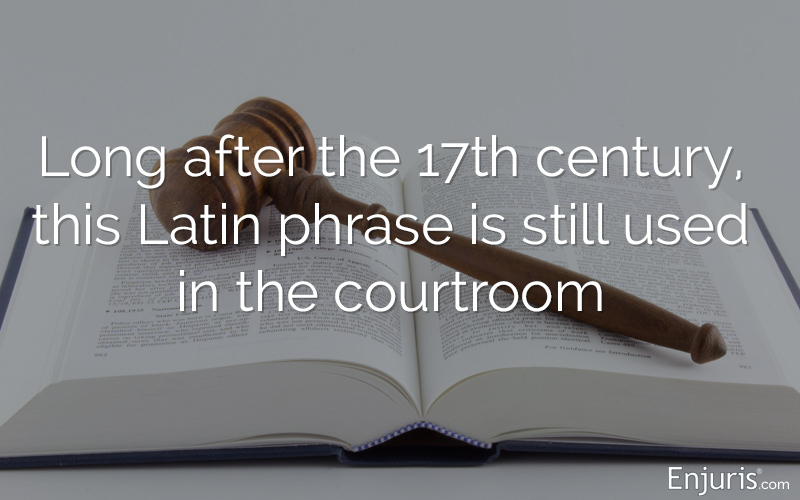 The thing speaks for itself.

This legal theory is important because it helps to explain evidence in a way that’s clear... and sometimes seems obvious.

If you’re like most people, you probably think Latin is a “dead” language that no one’s used since the 17th century. And you’d be mostly correct.

But there are a few phrases that endure, particularly in the legal world.

Did you know that “alibi” is a Latin word?

The Latin translation is “elsewhere,” or “at another place.” It became a noun only after it was being used in English in the 19th century.

Bona fide also has its roots in Latin. In Latin, it means “in good faith,” and we tend to use it today as meaning real, sincere, or legitimate.

There are plenty of Latin terms that are applied in the legal system, but you probably won’t hear most of them until you are involved in a personal injury lawsuit. One such term is res ipsa loquitur.

What is res ipsa loquitur?

Res ipsa loquitur means “the thing speaks for itself.” This concept is sometimes used to prove negligence in a case where there’s no proof of how an injury happened and no other reasonable explanation besides negligence.

There are 4 key elements to prove that a defendant was negligent in a personal injury lawsuit:

Sometimes, these elements are difficult to prove. While they’re essential to a plaintiff’s successful outcome, there is an alternative.

If the plaintiff can make an argument for res ipsa loquitur, they might be able to receive damages even if they can’t prove each element of negligence. The 3 important elements to prove res ipsa loquitur are:

The “classic” example of a res ipsa loquitur case is medical malpractice when a doctor left a surgical tool or foreign object in a person’s body during surgery.

Res ipsa loquitur shifts the burden of proof in a lawsuit

In a personal injury (civil) lawsuit, the burden is typically on the plaintiff to prove by a preponderance of the evidence. That means the plaintiff must demonstrate that there’s greater than a 50% chance that the injury happened because of the defendant’s negligence.

If the plaintiff’s lawyer successfully invokes the doctrine of res ipsa, the burden shifts to the defendant to prove that they were not negligent.

The effect of this shift is that instead of the plaintiff proving that they were injured because of the defendant’s negligence, there can be co-defendants making a case for why one defendant is more liable than the others.

The court has determined that in the case of the sponge left behind during surgery, res ipsa loquitur — the thing speaks for itself. There’s no defense to the claim that the sponge being left behind was negligent, it caused harm to the plaintiff, and the plaintiff couldn’t have avoided the situation.

But, the doctor could say it was the nurse’s job to remove the sponges. The nurse could say it’s the surgical assistant’s job to count all of the instruments and supplies before closing the incision. Really, anyone in the room could face liability, and it could ultimately be the hospital’s responsibility for its employees.

In the example with the falling brick, it’s a similar analysis. The scenario assumes the construction worker is the sole responsible party. In reality, there could be questions about whether there’s liability on the worker’s employer, the construction supervisor, the building management, and others. But the fact that the plaintiff’s injury was caused by the falling brick and that there was negligence because the brick fell could fall under the doctrine of res ipsa.

Every legal case is decided because of the evidence presented.

Sometimes, there’s direct evidence, which demonstrates that the negligence caused the plaintiff’s injury. This might be testimony from a witness about what they saw, heard, or otherwise observed. It can also be physical evidence, like the presence of the sponge in the patient’s body after surgery.

If a plaintiff’s lawyer can successfully invoke res ipsa loquitur, that doesn’t mean the case is automatically won. A defense lawyer might be able to shift the burden of proof back to the plaintiff and absolve the defendant of responsibility.

Or a defendant might use the Act of God defense. An Act of God would be something that’s naturally occurring — for instance, if the injury was because the plaintiff was hit by an object that fell from a window, it could be argued that it was because of a strong gust of wind and not because of the defendant’s negligence.

If the defendant can successfully argue that the plaintiff somehow contributed to their own injury, then res ipsa loquitur would not apply.

If you were injured because of someone’s negligence, you deserve compensation for your expenses. Although every lawyer should know the concept of res ipsa loquitur, it can be a difficult argument to make in a courtroom. A skilled lawyer will evaluate every aspect of your claim and formulate the best possible case to win your lawsuit.

You can use the Enjuris law firm directory to find a lawyer in your state who can handle your personal injury lawsuit.