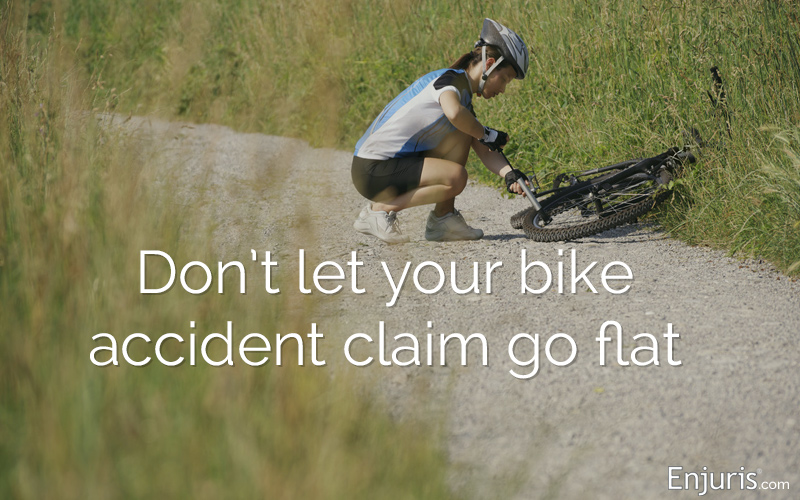 Here are the important bike laws you need to know

Across the nation, cities are trying to improve the quality of life for their residents by promoting cycling through investments in bike lanes, bike zones, and traffic calming measures.

Though the intentions are good, the results haven’t always been positive. While traffic fatalities have declined in the United States over time, cyclist fatalities have increased by 25% since 2010.

Pennsylvania is considered the 11th most bike-friendly state according to the League of American Bicyclists. With a number of prominent local organizations pushing for the state to take even more bike-friendly measures, the number of bikers—and bike accidents—is likely to increase.

With that in mind, let’s take a look at bike accidents and lawsuits in the Keystone State.

According to the National Highway Traffic Safety Administration, more than 2 people are killed on a bicycle every day in the United States.

In Pennsylvania, bicycle crashes represented 0.8% of the total reported crashes and 1.5% of all traffic fatalities in 2018. Although these percentages seem small, they still represent 18 bicyclist fatalities and 962 injuries.

Children ages 5-14 were the most vulnerable to injuries while riding a bicycle. Another vulnerable group in Pennsylvania are those ages 15-19.

Pennsylvania law requires bicyclists to follow the same rules and regulations as motor vehicles. This means bicyclists have to stop for traffic lights and stop signs.

Yes, Pennsylvania cyclists have to stop at traffic lights and stop signs, too! Tweet this

Let’s take a look at some of the most common questions concerning Pennsylvania bike laws:

Do I have to wear a helmet?

Do I have to equip my bike with any safety devices?

Between sunset and sunrise, your bike must be equipped with a front lamp, rear reflectors, and side reflectors visible from at least 500 feet.

Your bike must also have working brakes that stop your bike within 15 feet from a speed of 15 mph on level pavement.

Finally, certain municipalities have passed regulations requiring bikes to be equipped with bells and other safety/signal devices.

Can I ride next to another bicyclist?

Yes. But, bicyclists can’t ride more than 2 abreast unless they’re on a bicycle-only path.

Can I ride on the sidewalk?

You can’t ride a bicycle on a sidewalk in a business district or where there’s a bicycle-only lane available. If you do ride on a sidewalk, pedestrians have the right-of-way.

Do I have to ride on the shoulder of a road?

No. Bikes are permitted to be ridden on the shoulder of the road (in the same direction as the flow of traffic), but they’re not required to do so.

I should stick to the right lane, right?

Right. Bikes should be ridden in the right-lane of a multi-lane road unless the bike is overtaking another vehicle moving in the same direction, taking a left turn, or there’s an obstruction in the right lane.

Do motor vehicle drivers have to watch out for me?

Motor vehicle drivers owe a duty to use reasonable care to avoid causing injury to you (and everyone else on the road). In addition:

Can a car pass me in a no-passing zone?

Can I ride my bike across a crosswalk?

Cars aren’t required to yield to bicycles being ridden across a crosswalk. Remember, bikes are treated like cars! If you want to use a crosswalk, dismount and walk your bike across.

Can I hop on the freeway to get where I need to go?

Bicycles aren’t permitted on freeways in Pennsylvania without permission of the Pennsylvania Department of Transportation. Generally, this permission is only granted for things like bike races.

Will insurance cover my bicycle injuries?

In Pennsylvania, bike accidents are covered by car insurance. Whether you receive compensation from the insurer of the motor vehicle that hit you or your own auto insurance company depends on the type of insurance carried by the parties involved (fault or no-fault insurance coverage).

It’s important to keep in mind that regardless of what type of insurance you or the other driver has, you should be able to recover both economic and noneconomic damages. This isn’t necessarily the case when it comes to car accidents.

Your attorney can help you sort out the insurance issues and determine whether you need to file a lawsuit in addition to filing an insurance claim.

Sometimes, a bicyclist is partially at fault for an accident.

Deandre finishes a long evening of studying at the University of Pittsburgh School of Law and heads home on his bicycle. He’s heading down Walnut Street. It’s nighttime, but Deandre’s bike isn’t equipped with a front light.

As he approaches a 2-way stop sign at Walnut Street and Copeland Street, Deandre slows to a stop. Not seeing anyone coming, Deandre continues. Meanwhile, Amy, another exhausted law student, is falling asleep while flying down Copeland Street. She fails to stop at the stop sign and slams into Deandre.

Pennsylvania follows the modified comparative fault rule. Under this rule, a plaintiff’s damages are reduced by their percentage of fault. If, however, their portion of fault exceeds 50%, they are prohibited from recovering any damages.

Looking back at our examples with Deandre and Amy, the modified comparative fault rule would prevent Deandre from recovering the full $500,000. Instead, he would recover $400,000 (i.e., 80%).

Though most bike accidents involve motor vehicles, some bike accidents are caused by poor road conditions. For example, an unmarked hole in the road, debris, or some other hazard could cause a cyclist to lose control of their bike and crash.

Who’s responsible when poor road conditions are to blame?

Premises liability law generally holds that property owners are responsible for ensuring that their property is well-maintained and free of dangerous conditions.

For bicyclists, the property in question (usually a road or bike path) is often owned by a city, county, or town. Accordingly, the bicyclist must file a negligence lawsuit against the appropriate government entity to recover damages.

Enjuris tip: Suing the government is different from suing a private individual. Plaintiffs must comply with strict notice requirements and a shorter statute of limitations. What’s more, the government is immune from lawsuits in certain situations. If you think the government might be responsible for your bike accident, consult with an experienced personal injury attorney immediately.

With that goal in mind, here are some recommendations from the Pennsylvania Department of Transportation:

Still have questions about bike accidents in Pennsylvania? Need a lawyer to help deal with the insurance company or go after the person who caused your accident?

Consider using our free online lawyer directory to locate an attorney near you.