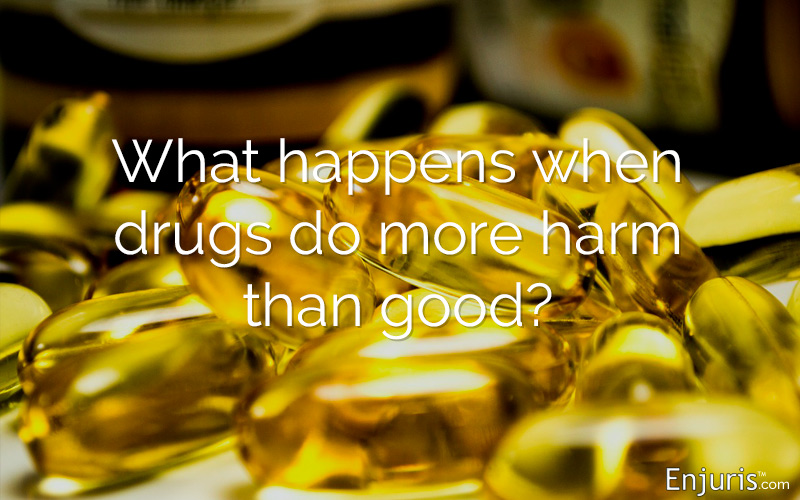 What to do when a defective drug causes you harm

Table of Contents + show
What to do when a defective drug causes you harm
Types of pharmaceutical liability cases
Who can be held liable for unsafe drugs?
What elements do you need to prove in a pharmaceutical liability case?
Statute of limitations
Recoverable damages in a bad drug case
How to choose a lawyer
Sometimes drugs that are defective make their way into the marketplace and into your medicine cabinet. An injury caused by one of these drugs may be the basis for a pharmaceutical-based product liability claim.

Pharmaceutical drugs are intended to help you feel better. But every once in a while, a drug makes its way into the marketplace that’s defective and makes you feel worse—sometimes even causing permanent damage or death. When this happens, your legal recourse takes the form of a product liability lawsuit.

Facing factsIn Montana, opioid overdoses have claimed the lives of 700 people since 2000. Some counties have decided to sue several of the companies that manufacture opioids for fraudulent marketing.

Pharmaceutical-based product liability claims are similar to other defective product claims, but there are some important differences. Let’s take a closer look at pharmaceutical liability in Montana.

Just like product liability claims in general, there are three categories of pharmaceutical liability cases:

Let’s take a look at each category.

A defectively manufactured pharmaceutical drug is a drug that—although properly designed—left the manufacturer in a condition other than the condition intended.

The most common example is when a drug becomes contaminated during the manufacturing process in such a way that the drug is no longer safe.

In The News: In 2017, Montana (along with 42 other states) reached a settlement with Johnson & Johnson over the contamination of several drugs, including Tylenol, St. Joseph aspirin, Benadryl, Rolaids, and Motrin.

Claims based on defectively-designed drugs are rare because most unreasonably dangerous drugs aren’t approved by the U.S. Food & Drug Administration (FDA). Nevertheless, there are tools in place to allow certain drugs to be approved very quickly, and some side effects may not be realized until after the drugs are on the market.

When we think of drug “marketing,” we think of the colorful advertisements on television and in magazines. But, in the legal context, drug marketing also includes the warning labels affixed to drug packaging.

In order to establish that a drug was improperly marketed in Montana, you must prove that the manufacturer failed to warn you about a risk, and the risk made the product unreasonably dangerous.

For example, if a drug increases the risk of birth defects in pregnant women and the manufacturer failed to provide a warning indicating as much, a woman who gives birth to a child with an abnormality after taking the drug may be able to sue the manufacturer.

However, there’s one important caveat in Montana:

The manufacturer's duty to warn consumers is limited to providing an adequate warning to “the healthcare professional responsible for making decisions related to the patient’s care” who then assumes the duty to pass the necessary information on to the consumer. This is referred to as the learned intermediary doctrine.

Montana has adopted the learned intermediary doctrine with respect to pharmaceutical-based product liability lawsuits. Tweet this

In The News: Montana parents, Lisa Rooney and Wayne Halvoersen, filed a lawsuit after their infant daughter was born with extensive birth defects. The lawsuit alleged that the birth defects were a result of Ms. Rooney taking Effexor during her pregnancy. The lawsuit further alleged that the drug company failed to warn Ms. Rooney or her prescribing physician of the risks.

Who can be held liable for unsafe drugs?

When it comes to bad drug cases, there are a number of potential defendants. These include:

What elements do you need to prove in a pharmaceutical liability case?

In a pharmaceutical liability case based on negligence, the plaintiff must prove that:

In a pharmaceutical liability case based on strict liability, the plaintiff doesn’t need to prove that the defendant breached any sort of duty. The plaintiff only needs to show that:

Enjuris tip: There are a couple of factors that might impact the statute of limitations in your case. It’s always a good idea to consult with an experienced Montana attorney sooner than later to make sure you don’t miss any important filing deadlines.

Enjuris tip:Learn more about the types of damages that a plaintiff can recover in a bad drug lawsuit, including examples of economic and non-economic damages.

How to choose a lawyer

Consider locating an experienced attorney using our free online directory or by looking through the “product liability” section of the Montana State Bar’s Lawyer Referral Service.