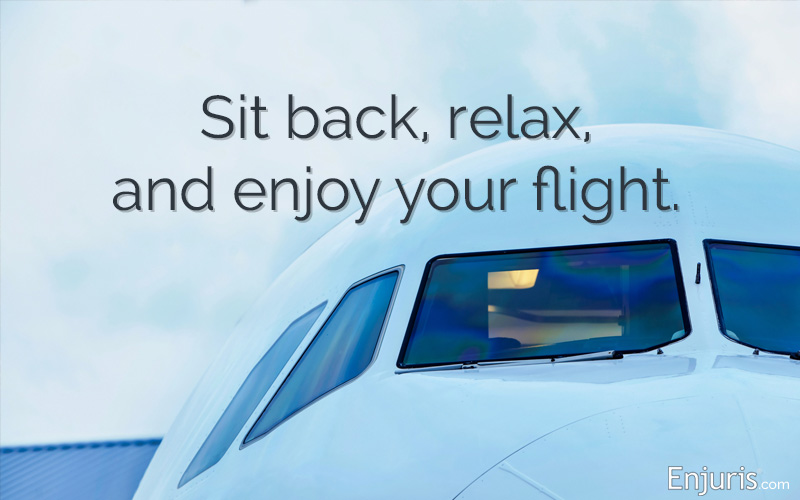 Table of Contents + show
When you need an injury lawyer after a plane crash or aviation accident
Causes of aviation accidents
Plane crash liability
Non-crash accidents
Michigan modified comparative fault rule
Injuries to airport or airline employees
When to contact a plane crash or aviation injury attorney
Air travel is usually safe. But if you’ve lost a loved one in a plane accident, or if you were injured, here’s what you should know about who could be liable.

Plane travel has never been safer.

Plane crashes get a lot of news coverage because they are often catastrophic and usually result in a significant number of fatalities. However, you are far more likely to be involved in a car accident in your lifetime than in a plane crash.

Facing factsU.S. drivers are statistically likely to be involved in 4 or 5 car crashes, while the vast majority of people never experience a plane crash.

However, many aviation-related injuries are not because of a plane crash.

Aviation injury statistics compiled by the National Transportation Safety Board (NTSB) include incidents like luggage-handling injuries, slip-and-fall accidents on the passenger boarding bridge, tripping hazards in the plane’s aisle, minor in-flight bumps from turbulence, or other types of accidents.

Most crash-related injuries are from small plane flights, and not commercial jetliners.

Real Life Example:In late October 2021, a 2-seat propeller plane crashed into a Marengo home, killing 2 passengers. No one on the ground was injured.

The victims were a brother and sister in their 20s who were likely trying to land the plane nearby since the homeowners were related to the victims. In fact, the plane’s pilot was on the phone with the homeowner moments before the crash. The homeowners were in the house at the time of the crash, and they reported hearing a noise “like a bomb going off.” When they went outside, they saw parts of the plane scattered around the lawn.

The pilot had worked as a float plane pilot and flight instructor since 2020. He called the homeowner, his sister-in-law, to tell her she should go outside to see him buzz overhead, but the plane crashed moments later after flying at low altitude and engaging in a loop maneuver. The plane flew upside down toward the top of the loop and then righted itself just before it crashed because there was not enough clearance to complete the loop. It crashed nose down into the ground near the house. The wings were torn off by impact and investigators found no mechanical or structural problems with the plane.

There are 3 primary causes of aviation accidents:

Although there are stringent standards for becoming a licensed pilot, even experienced pilots make mistakes.

A pilot needs to know how to handle unexpected events like storms or wind, and also mechanical malfunctions. If the pilot is familiar with the plane mechanics, they might be able to handle an in-flight technical problem safely.

If there’s a severe storm, a large jetliner can usually climb to a higher altitude that allows it to soar over the storm. But a small plane is more susceptible to sudden bad weather conditions. A lightning strike could cause complete electrical failure or other problems.

Small plane pilots must stay tuned in to weather conditions, both actual and anticipated, and modify their flight course accordingly. Pilots need to be trained to not only manage a weather event, but also to predict when it might happen.

Commercial aircraft are much safer than small planes because there are far fewer accidents, BUT you’re also more likely to survive a small plane crash than a crash on a commercial jet.

A small plane could force a landing in a rural or unprepared area, whereas a commercial jetliner likely can’t, due to its size and speed of travel. A small plane has a better chance of managing to coast to an unexpected landing. Even so, an equipment malfunction can lead to tragedy. Even the most experienced pilot can only do so much if the plane’s equipment fails.

According to the Federal Aviation Administration (FAA), the other top causes of fatal general aviation accidents are:

An aviation-related injury is just like any other personal injury claim when it comes to receiving damages, or compensation.

If you are injured as a result of a person or entity’s negligence, you can recover money to cover the costs related to the injury.

How do you make a claim?

That depends on who is liable. Unfortunately, this is a hard question to answer because there could be a number of defendants, or liable parties.

A flight crash investigation could take months. Whether or not there are legal claims, agencies like the FAA and the NTSB will need to investigate what went wrong in order to prevent future accidents.

Enjuris tip:If the crash involves a commercial airline, there’s a heightened duty of care to passengers because an airline is a common carrier. A common carrier is a tour bus, passenger train, commercial plane, bus, taxi, or cruise ship. In other words, it’s any mode of transportation offered as a service to the public. If the entity responsible for keeping you safe didn’t meet its duty of care, it could be liable for your injuries.

If the crash involves a private plane, there could be negligence on the part of the pilot or owner of the plane.

Negligence could be attributed to the:

A plane is constructed with hundreds or thousands of parts, many of which come from a variety of manufacturers. Once the investigation is complete, the investigating agency should make a statement about what caused the crash.

If you were injured while boarding or disembarking a plane, or during a flight, because of something unrelated to the flight itself, it’s most likely that the airline is responsible for your injuries.

These types of injuries could be a slip-and-fall or trip-and-fall while boarding, tripping over an item left in the aisle, an item falling from the overhead luggage bins, or similar. It’s the flight crew’s responsibility to ensure that your experience on the plane is safe. They are supposed to keep aisles clear, luggage bins closed, and maintain safety on board.

Michigan follows a rule for personal injury lawsuits that says that if the plaintiff (injured person) has 50% or more of the liability for their injury, they cannot recover damages.

For example, if you fell over luggage in your seat area while getting up to use the bathroom on the plane but you put it there, you would likely be more than 50% liable and would not recover costs for your injury.

Injuries to airport or airline employees

If you’re an airline or airport employee and you were injured at work, you may be able to file a claim for workers’ compensation benefits.

Your likelihood of being injured as an airline employee is different, depending on the nature of your job. A baggage handler might be more prone to repetitive motion injuries or stress injuries from lifting and bending, while a flight attendant might be more likely to trip over an item in the aisle and become injured.

When to contact a plane crash or aviation injury attorney

If you were injured or lost a loved one in a plane crash or other aviation accident, it’s important to seek the guidance of an experienced lawyer.

These cases are complex because of the potential number of defendants involved, and because you’re dealing with huge corporations with teams of lawyers and resources.

If you need a Michigan personal injury lawyer, Visit the Enjuris law firm directory to find an experienced attorney in your area.