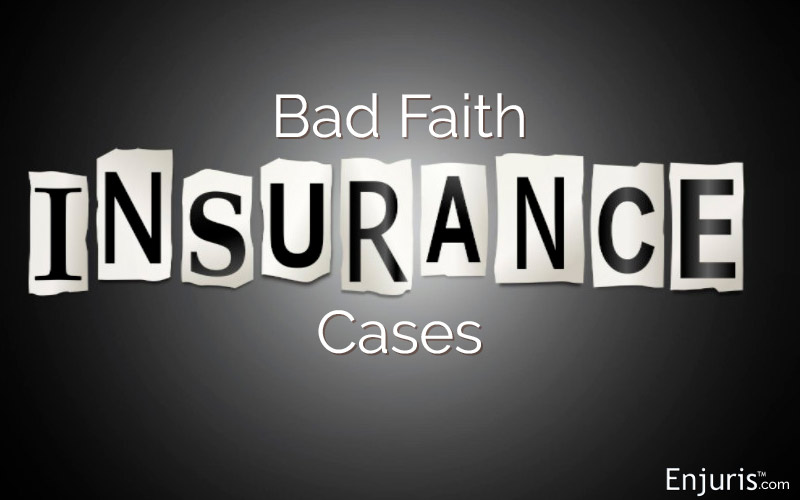 When your coverage isn’t there to catch you

Table of Contents + show
When your coverage isn’t there to catch you
The bad faith insurance claim
The bad faith claim in Florida
What if they don’t cure the bad faith violation?
Resources to help you find the right attorney
Sometimes, insurance companies like to push boundaries and see if they can get away with not investigating claims or not paying out money owed on a policy. This is called “bad faith.” Find out what to do if your insurance company tries to take advantage of you:

Insurance companies get a bad rap, but sometimes they deserve it.

If you’ve been in an accident, all you want is to have your car repaired and your injuries taken care of. That’s not so much to ask. That’s why you got insurance in the first place, right?

Sometimes, however, your insurance company might not play ball. They might delay or even deny your claim, and then you’re left in the hospital or in the automotive shop, wondering what on earth just happened. You sent in all your paperwork, but they didn’t respond very quickly. In fact, it took weeks. Then they didn’t offer any sort of reason for denying your claim. They just sent you a form letter, and that was that.

What are you supposed to do now?

A third-party insurance bad faith claim, on the other hand, is when an insurance company unreasonably fails to defend, indemnify or settle a claim within policy limits or investigate a claim for a different party – such as when the insured (first party) buys insurance from the insurance company to protect against claims from another (the third party).

Enjuris tip: Common law is judicial precedent, what has been developed through decisions made in the court system, and statutes are laws that have been created by lawmakers.

Insurance companies are bound by both common law and statute to do a variety of things. (Common law is judicial precedent, what has been developed through the court system, and statutes are what have been created by lawmakers.)

They are required to:

The idea here is that insurers are obliged to act in good faith and to engage in fair deals. This has evolved through common law.

The bad faith claim in Florida

There are no first-party bad faith claims in Florida under common law, though they do exist under statutory law. Third-party claims get to choose between both. Statutory bad faith cases are behind the majority of Florida’s bad faith litigation because the law is so clear and uncompromising.

(b) By the commission of any of the following acts by the insurer:

1. Not attempting in good faith to settle claims when, under all the circumstances, it could and should have done so, had it acted fairly and honestly towards its insured and with due regard for her or his interests […]

This also includes third parties. They have to clearly choose between common law and statutory claims, however, and cannot proceed with both at once.

The duty of good faith in Florida provides that insurers owe a “duty to their insureds to refrain from acting solely on the basis of their own interest in settlement,” as was said in State Farm Mut. Auto Ins. Co. v. Laforet. Under Florida’s Unfair Insurance Trade Practices Act, any of the following would be considered to be bad faith on the part of the insurance company:

Under Florida law, a third-party claim is part of the insured’s claim – so it wouldn’t be a separate cause of action.

Additionally, the insurance company has to be given 60 days to cure the alleged bad faith violation before any further action is taken, so if they come back and pay the money that’s owed, then no bad faith action can be initiated after that.

What if they don’t cure the bad faith violation?

First, ask to speak to the adjuster’s supervisor. You want to make sure that you’ve dotted the I’s and crossed the T’s before you take any drastic measures.

However, if the supervisor takes the same position, then lawyer up; you’ll be playing hardball yourself.

An insurance lawyer or a personal injury lawyer is extremely helpful in this regard. Additionally, reporting your insurance company to the state insurance board will make sure that this doesn’t happen to anyone else. The insurance board can start an independent investigation and institute fines if necessary.

It’s important to remember that just because an insurance company rejects your case doesn’t mean it’s automatically a bad faith claim. Speaking with an attorney can help you understand your rights and whether you are looking at the situation in an unbiased way. Consider sitting down with an Enjuris listed Florida law firm.

Resources to help you find the right attorney