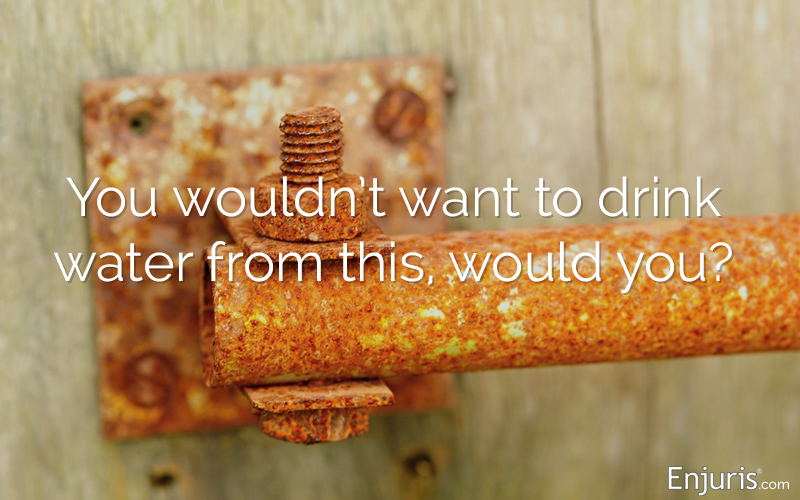 If your insurance company balks at covering a cast iron pipe failure, you might need to consider a lawsuit

People used to say that homeownership was the American Dream.

While that might still be true for some people, there are parts of homeownership that are not so glamorous. A house requires regular maintenance, which is more than mowing the lawn and cleaning. For instance, you also might need to replace furnace filters, update appliances, and replace components like a roof or siding, which can be expensive and require expert installation.

One thing you probably don’t think about unless it becomes a problem is your plumbing system. A network of unseen pipes run silently through your walls and ground giving you water when you want it and letting it drain away when you’re done. And as long as the water flows, there’s little reason to worry about them.

But sometimes the water flows too much — in other words, a pipe failure can mean drain backup, slow draining, severe leaking, water damage, and expensive replacement costs.

Many older homes, particularly homes before 1975, were built with cast iron plumbing systems. At the time, the durable pipes were anticipated to last 80 to 100 years and be able to withstand heavy pressure. In the 1970s and earlier, plastic or PVC pipes—which are standard in most homes built today—were not yet invented and available.

However, now decades later, homeowners nationwide are finding out that their cast iron pipes are beginning to fail. The pipes didn’t last nearly as long as expected, and beloved homes are being damaged as a result.

Here are some of the reasons why your cast iron pipes might have failed sooner than you expected:

What damage can cast iron pipe failure cause?

Common problems that result from cast iron pipe failures include:

How to spot a cast iron pipe problem

You might already be aware that there’s a problem, especially if you’ve observed the effects of some of the known problems.

Here are some other hints that you might have cracks in your cast iron pipes:

Unfortunately, it’s difficult to diagnose a pipe problem because they’re usually inside walls, underground, or in crawl spaces. They’re not easily visible, and you usually need a plumber to come in and take a thorough look.

A total of 860 lawsuits over water damage were filed against the state-run Citizens Property Insurance Corporation in a single month. Of those, nearly half went to court.

In 2018, the Citizens Property Insurance Corporation changed a policy that limited water damage repair payments to a $10,000 maximum unless a homeowner would agree to use the company’s own contractor network for all repairs. In other words, you would use the contractor of the company’s choice, rather than your own, if you wanted insurance coverage.

The insurance company also created a rule that allows it to deny reimbursements if a water damage repair is made within 72 hours after a claim is reported unless the insurance company has the opportunity to examine the damage first and approve the work.

If you have a mortgage, you’re likely required to have homeowners insurance. If you don’t have a mortgage, you probably should have it anyway since it protects you financially from many of those things that can go wrong in a home — i.e. a branch falls on your home, a fire, flooding, and... sometimes, cast iron pipe damage.

Or, if they do cover it, they might give lower reimbursement for a claim related to cast iron damage. Even insurance companies that claim to cover cast iron damage often find reasons to deny the claims.

Why don’t insurance companies want to pay these claims?

The answer is a simple one:

An insurance company makes a profit when its policyholders pay more in premiums than it pays out in claims. You pay your premium with the hope that insurance is not something you’ll ever need to use, but it’s there if you need it for an expensive repair.

Your insurance company also hopes you never have to use it. When it pays out a claim, it’s a deduction from its own bottom line. The occasional roof repair or water damage is probably going to cost less than what you pay the insurance company over a few years, but here’s where cast iron pipe replacement is more expensive:

The cost of cast iron pipe failure could be much more than the actual plumber’s bill for repairs. In other words, there might be other losses associated with this problem that aren’t immediately obvious, such as:

What if your insurance doesn’t cover repairs?

So many homeowners have discovered problems with their cast iron pipes that insurance companies are beginning to decline the claims. That’s why some newer insurance policies are excluding coverage for cast iron pipes, or they increase the cost for policies that include them.

If you’ve filed a claim for a broken cast iron pipe, the insurance company should send a plumber or engineer to your home to evaluate your claim. You might also consider hiring your own expert to provide a second opinion so that you can have more than 1 estimate for the cost of repairs.

Your insurance company is obligated to provide an explanation of how they’ve calculated their insurance payout offer or for why your claim is denied. If the company undervalues or wrongfully denies your claim, you’re left with an expensive repair and no options.

Often, the reasons why cast iron pipe claims are denied is because of a lack of evidence to support the claim, or because the insurance company says the homeowner had an inadequate inspection of the pipes when they purchased the home.

Here are some other examples of what an insurance company might do to avoid paying your claim:

These practices are known as insurance bad faith.

Fortunately, there are ways to avoid being a victim of bad faith. An insurance recovery lawyer can help you to obtain the damages you need to repair your home.

Call a lawyer before you call your insurance company

It is important to contact an insurance company quickly when you discover the damage. That’s because if the damage “sits” too long, the insurer could deny coverage because it could claim that you didn’t make the repair soon enough.

But the insurance company might also manipulate the facts in order to find a way to deny your claim. That’s why if you have significant damage, you might want to call your lawyer first.

Your insurance company might try to say that the damage is from ordinary wear and tear or failure to perform routine maintenance, or that the damage wasn’t sudden and accidental, was preexisting or lasted longer than 14 days, or that you don’t have the correct coverage for your issue.

But your lawyer will be ready for these excuses and can negotiate with the insurance company so that they don’t negatively impact your payout.

A plaintiff’s insurance lawyer will be able to advise you of your options, including the steps to take in order to fix the problem without jeopardizing your payout and what to do if the insurance company won’t provide compensation.

Want to talk to an attorney near you?

You can use the Enjuris law firm directory to find a lawyer in your area who will work with you to receive insurance for damage related to cast iron pipes in your home.