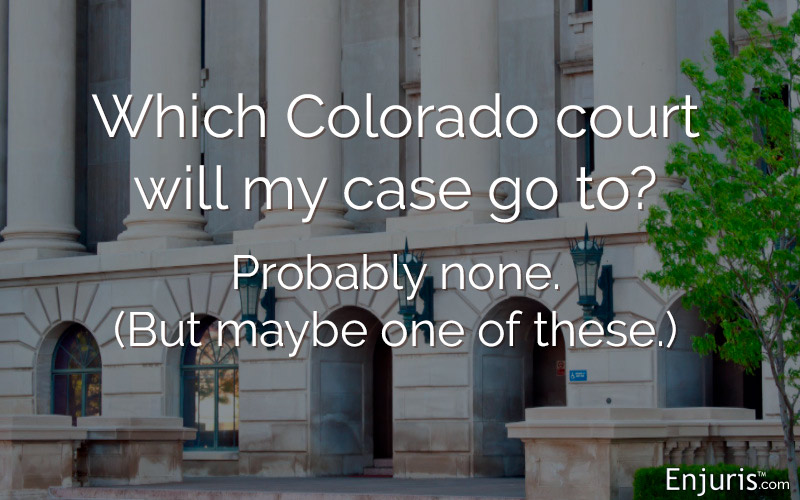 Few accident cases actually go to court. But if yours does, here are the Colorado courts it might end up in

Table of Contents + show
Few accident cases actually go to court. But if yours does, here are the Colorado courts it might end up in
Claims processing

If you have been injured in a car accident or other personal injury, it is helpful to know the potential process that your claim may encounter.

Your accident claim may be resolved through a settlement or a lawsuit filed in the appropriate Colorado court. Here’s how it all starts.

When an accident occurs, you would usually submit a claim to an insurance company for processing.

For example, if the accident was the result of a motor vehicle collision, a claim may be submitted to the at-fault driver’s car insurance company.

There may be other insurance coverage to cover liability in other types of cases. For example, Colorado doctors and other healthcare providers commonly carry malpractice insurance. Businesses may have property insurance that covers slips and falls. And so on.

Most likely, your accident will start with filing a claim via the other person’s insurance company.

Enjuris tip: If there is no insurance to file with – or no person or entity that can pay your compensation - you might have trouble meeting the criteria that makes your case worthwhile to pursue. See reasons why an attorney may decline your case.)

When a claim is submitted, an insurance adjuster is often assigned to the case.

You may hire a Colorado personal injury attorney who attempts to negotiate a settlement with the insurance adjuster.

If a satisfactory settlement is not made, the lawyer may proceed to file complaint in the proper court.

Enjuris tip: Sources report that about 95% of cases are settled without going to court. But in case yours does, here’s what to expect.

The complaint is filed by the plaintiff (otherwise known as the “victim”). That’s you. Your personal injury attorney will prepare this for you.

Enjuris tip: Wondering if you even need a lawyer? No, it’s not required. But if you end up going to court, you’ll be glad you have one! See other times you’d be better off hiring an attorney after an accident.

The complaint establishes the factual allegations against the defendant that make this party legally responsible for the damages that the plaintiff sustained.

The defendant responds to the complaint with an answer that outlines why he or she is not legally responsible for these damages.

The defendant may also contest the amount of damages alleged by the plaintiff and raise certain defenses, such as an expiration of Colorado’s statute of limitations or contributory negligence.

In other words, there is some back and forth between the lawyers, usually involving lots of paperwork and legal jargon.

The complaint, answer and other pleadings must be filed in the appropriate court.

There are a number of different courts in Colorado. The appropriate one is the one that:

Small claims courts handle claims where the claim asks for $7,500 or less.

A small claims case is filed in the county where the defendant resides, works or has a place of business or in the area where the accident occurred.

While some states permit having a lawyer represent clients in small claims court, Colorado restricts this right for plaintiffs.

Plaintiffs can only be represented by a lawyer in a small claims court case in very limited situations. Small claims cases are meant to provide a more efficient way for private parties to access the court system. Additionally, the low damage limit often makes it impractical to pay for an attorney’s services for this type of case.

County courts have a higher threshold for damages, in the amount of $15,000.

When filing a case in county court, the court that has proper jurisdiction of the case is the county court where the defendant resides, where the plaintiff resides or in the county where the accident occurred.

Because there is no limit on the amount of damages that can be requested in district court, many plaintiffs choose to file their case in a Colorado district court.

Jurisdiction follows the same rules as that of county courts. In district court, the lawsuit is governed by the Colorado Rules of Civil Procedure.

Where does your case go if it goes to court in Colorado? Find out… https://bit.ly/2daGYU8  Tweet this

District courts are still state courts. They involve a more in-depth litigation process in which multiple discovery requests may be made. This is an automatic process in district court so neither party has to specifically request it. A full discovery process allows the parties to fully investigate the case.

Small claims courts, county courts and district courts are all state courts based on Colorado state law and state rules.

The state or federal court hears the testimony, receives the evidence and decides on motions before it. After the judge or jury renders a verdict, either party may decide to appeal the verdict.

This appeal is made to the appellate court. The Colorado Court of Appeals is established by statute and is made up of 16 judges. It generally has jurisdiction to review the decisions made by the district court. The governor appoints the judges of this court. The Chief Justice of the Colorado Supreme Court appoints one of the judges to serve as chief judge. The appellate court is divided into different judges, each of which have three judges that decide the cases that come before it.

The appellate court looks to see if errors were made in the process that likely had an impact on the final verdict. They do not review evidence or look at arguments based on new information.

If either party is not satisfied with the decision that the appellate court makes, the case may then be appealed to the state supreme court.

However, the Colorado Supreme Court can decide not to review a case, in which the decision reached by the appellate court is the final decision.

If the case goes to federal court in Colorado and is then appealed, this appeal is heard in the Tenth Circuit Court of Appeals. The president appoints these judges. If the case is appealed from here, it is appealed to the United States Supreme Court, the highest court of the land that hears cases involving constitutional questions, laws concerning federal law and appeals from state supreme courts. However, the Supreme Court of the United States does not hear most of the cases that are appealed to this level.

It’s highly unlikely that an injury case would make it to this point.