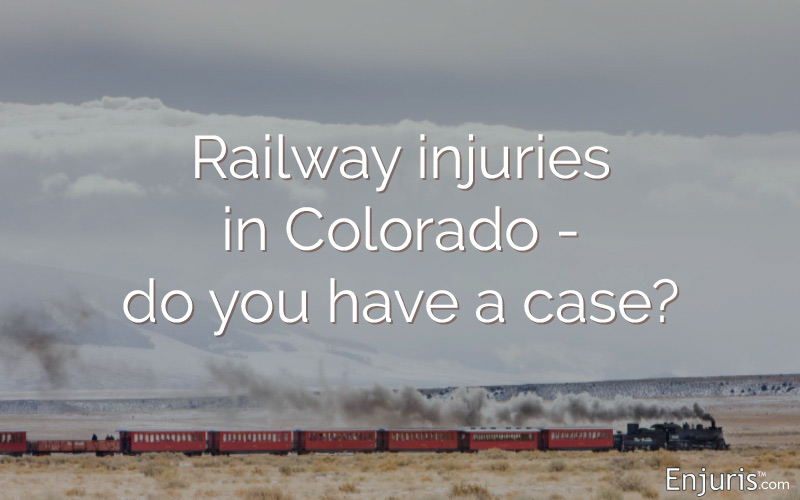 How train crashes can lead to settlements or lawsuits, and what to do if you think you may have a case

Colorado’s population is growing by leaps and bounds, which has spurred the building of light rail services in the Denver area, especially. The expansion of rail service for the growing population is a wonderful thing; it protects the environment and reduces the number of auto accidents.

But the growth has a downside.

The expansion of rail service into rural areas with poorly marked railroad crossings has increased the number of serious and fatal train accidents.

The majority of train accidents in Colorado increasingly are occurring at railroad crossings involving either cars or pedestrians. Other common train accidents include derailments resulting in passenger injury.

We’ve put together this guide for you if you are considering legal action for an accident involving a train or railway.

You must establish cause: how did your Colorado train accident happen?

First of all, to make a case for a personal injury lawsuit in a train accident, the precise cause of the collision must be established.

The most common causes of train accidents in Colorado are thought to be:

One estimate published in Mass Transit is that train derailments are caused by equal parts track, equipment, and people:

From a railroad perspective, all derailments — passenger and freight — are caused approximately one-third by track, one-third by equipment and one-third by human factors.

Most train accidents – whether they are derailments or railroad crossing mishaps – require complicated investigations to determine liability.

Usually when there is a train derailment or crash in Colorado, the Colorado Department of Transportation will step in and conduct a detailed investigation.

Enjuris tip: The Colorado Department of Transportation’s division of Transit and Rail is responsible for the planning, development, operation, and integration of transit and rail into the statewide transportation system. The Colorado State Freight and Passenger Rail Plan was officially adopted by CDOT Transportation Commission on March 22, 2012.

Depending upon the outcome of that investigation, you may be able to file a lawsuit against the railroad or the company that operated that train.

Though you may be able to recover compensation, there are limits to recoverable damages under Colorado law.

There often are different entities responsible for maintaining the track or operating the train. There also may be more than one party negligent in the accident. So, several insurance claims or lawsuits could be necessary.

Enjuris tip: Because railroad accident cases can be so complicated, it’s highly recommended you hire a lawyer. See our guide to questions you may have about hiring a Colorado lawyer (Are they optional? What if I don’t want to go to court? What will they actually do? How do I find the right attorney? See also How Long Will My Personal Injury Case Take?)

Given how complex railway accidents can be, the best option to secure compensation in an accident is to obtain the help of a personal injury or wrongful death attorney in Colorado.

With his or her help, you may be able to be compensated for some or all of the following damages under Colorado law:

Colorado state law limits the amount of compensation that you can receive in personal injury lawsuits.

Enjuris tip: Read it in the code: see Damages and Limitations on Actions in the Colorado Revised Statutes.

Specifically, Colorado limits non-economic damages, such as pain and suffering, to $250,000 (plus inflation) for damages that do not result in death.

The limit is $500,000 (plus inflation) if there is ‘clear and convincing evidence’ that an increase is justified.

The cap on non-economic damages passed in 1986, so there is an allowance for adjustment due to inflation.

Your claim for economic damages and compensation for physical disfigurement and injury is not capped.

Wrongful death claims in Colorado are covered in the Wrongful Death Act.

Where the descendant dies and leaves a spouse or heirs, the plaintiff in a wrongful death lawsuit can recover unlimited economic damages. However, the cap for non-economic damages has been limited to $250,000 (plus inflation).

If the deceased passed away without a spouse or heirs or dependent parents, the cap on both economic and non-economic damages together is $250,000 (plus inflation).

Colorado state law allows a jury to provide damages for reckless conduct. This is known as punitive damages, and is not tied directly to the losses that you sustained in the accident. The purpose of punitive damages is to punish reckless behavior by a company or individual.

However, C.R.S. 13-21-102 places a cap on punitive damages. Any punitive damages the jury awards in a railway accident is reduced by the post-verdict of the judge, making it equal to the amount of actual damages awarded.

See the latest Enjuris guide: Colorado Railway Accident Cases – What You Need to Know.
Tweet this

Those injured in railway accidents also should know that the federal government also has limited damages that may be recovered in a major railway crash.

The federal law is called the Amtrak Reform and Accountability Act (ARAA) and was passed in 1997. President Bill Clinton intended it as a comprehensive restructuring of Amtrak, but legal critics say it has shielded Amtrak and other railways from personal injury pay outs.

ARAA contains a controversial section that place a cap on the total amount of damages – including medical expenses and lost wages – in any one railroad crash to $200 million. This is regardless if the railroad was liable or not.

ARAA has hindered the ability for those injured in this deadly Philadelphia derailment to recover damages for their injuries. That railroad derailment also killed eight people.

If you are hurt in a railway accident in Colorado, the value of your case can drop substantially without the help of a skilled personal injury attorney. Between the state and federal laws governing railway accidents, someone injured in a train accident has much to lose without proper legal guidance.

How to find the right Colorado lawyer for your railroad case

If you don’t have an attorney yet, here are some guides that can help you prepare and choose the best lawyer for your Colorado railroad accident case: