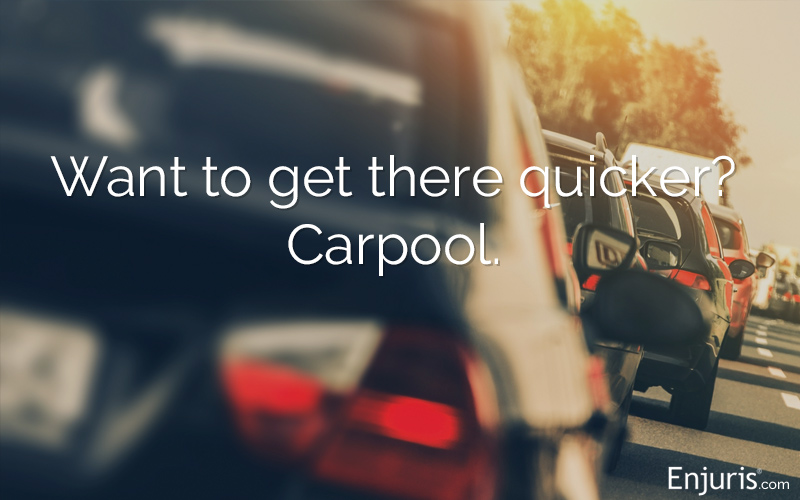 Who can use high-occupancy vehicle lanes?

Considering how bad traffic is in California, you have probably found yourself crawling along the highway and looking to your left where traffic seems to be moving briskly in the lane marked by white diamond symbols and thought: Can I drive in that lane?

Here’s what you need to know about high-occupancy vehicle (HOV) lanes in California.

What are HOV lanes?

HOV lanes are lanes that are reserved almost exclusively for the use of vehicles with a driver and 1 or more passengers.

HOV lanes are usually located to the left of unrestricted lanes and are identified by signs along the road and white diamond symbols on the pavement. In some instances, a striped median separates the HOV lane from the unrestricted lane.

Facing factsThere are roughly 1,171 miles of HOV lanes in California. A study conducted by the California Legislative Analyst’s Office found that the average HOV lane in California carries 1,095 vehicles per hour and approximately 2,518 persons per hour.

According to the California Department of Transportation, the goals of HOV lanes are to reduce congestion by encouraging ridesharing (also called “carpooling”) and to improve air quality. A number of studies support the use of HOV lanes to meet these goals:

Who can use HOV lanes in California?

If you want to drive in an HOV lane in California during its operational hours, your motor vehicle must have 2 or more occupants. There are, however, a few exceptions:

Real Life Example:Sue Ann Yasger was pulled over in an HOV lane in Southern California. When the officer explained that the lane was reserved for cars with more than 1 occupant, Sue insisted that she was not alone because she was 5 months pregnant.

The officer handed Sue a ticket.

Sue decided to challenge the traffic ticket in municipal court, arguing that California law considered a fetus to be a child. Ultimately, Judge Randell Wilkinson threw out the ticket rather than rule on the legal status of a fetus.

The California Highway Patrol said that it will continue to issue similar tickets.

“Our officers are not qualified to determine whether a lady is with child,” said Officer Paul Caldwell.

If you’re caught driving in an HOV lane in California without a passenger (or without meeting one of the other HOV lane law requirements), you can be pulled over and issued a $490 fine.

The goal of the California Highway Patrol (CHP) is to keep HOV violation rates to less than 10%. If violations rise above 10%, stronger enforcement measures will be implemented.

The impact of HOV lanes on personal injury claims

If you’re injured in a car accident, whether it's inside or outside of an HOV lane, contact an experienced California car accident attorney for help and advice on what to do next.