Written by: Enjuris Editors
What are damage caps, and how do they affect jury awards? How does Florida handle them? Have there been any recent changes or updates? Find out what damages are allowed – and which ones aren’t. 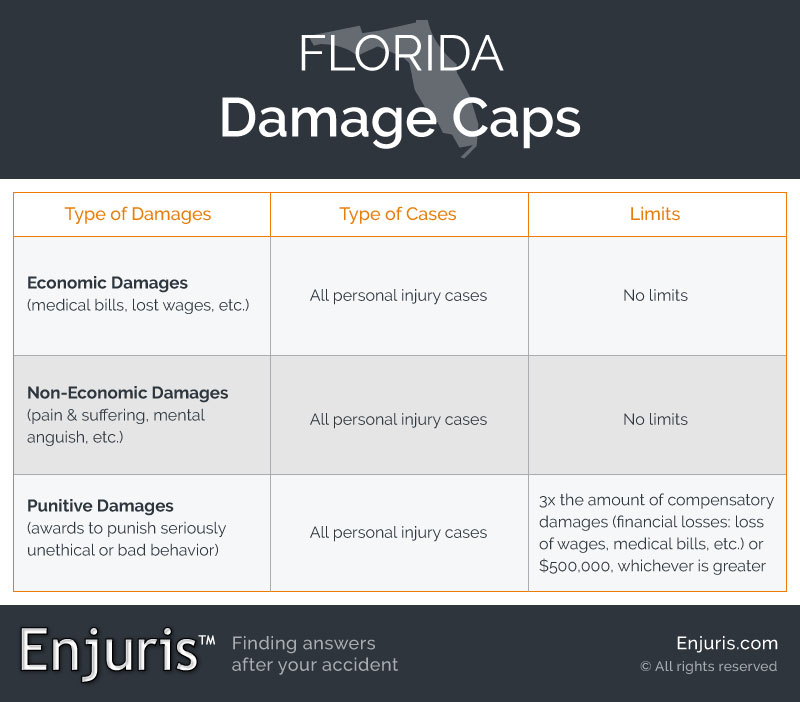 When a sympathetic plaintiff takes the stand, trying desperately not to cry as she recalls year after year of agony and suffering, juries can be swayed into awarding that person millions of dollars.

About damage caps in general

Courts in Florida and throughout the country like to avoid this scenario for many reasons. First of all, it’s based on emotion. While we’d all love to pay for plaintiffs’ pain and suffering, doing so for every claimant would bankrupt the system. High awards need to be adjusted elsewhere.

Take a medical malpractice claim, for instance. When a doctor is accused of medical malpractice, his insurance kicks in to cover the claim. Then the cost to acquire that insurance goes up. This causes the doctor to start practicing medicine very defensively, ordering tests that aren’t required or necessary to cover himself in the event of another lawsuit.

That plaintiff’s award must be balanced elsewhere in the system, and proponents of damage caps argue that it’s balanced by doctors practicing medicine so defensively.

Basically, insurance companies argue that damage caps exist so runaway juries don’t grant enormous awards to sympathetic plaintiffs. Most laypeople don’t even know they exist except during election season when politicians start discussing tort reform measures, so they don’t use those numbers as a starting point when they are coming up with jury awards.

However, limitations on jury awards haven’t led to lower insurance costs, and they haven’t helped claimants in court. If anything, they bar access to the court system and don’t hold anyone accountable. What they seem to do is protect doctors more than they protect patients.

Florida, like most states, has damage caps for various types of negligence cases. There is no damage cap statute for standard personal injury cases. There used to be a statute in place for non-economic damages (pain and suffering, mental anguish, etc.) in medical malpractice cases. This changed when the Florida Supreme Court decided that a cap on non-economic damages for medical malpractice lawsuits was unconstitutional. They voted against the cap in a 4-3 ruling, saying that it violated the state’s Equal Protection Clause.

There are also caps on punitive damages in Florida, which exist to punish seriously unethical or bad behavior.

It is generally rare to see these types of damages at play in most cases. Florida limits these damages to three times the amount of compensatory damages (those tied to financial losses, like loss of wages, medical bills, and more) or $500,000, depending on which is greater.

Punitive damages in Florida are subject to certain situations

Do you have a case in Florida? Consider speaking with an Enjuris listed Florida law firm or learn more about how to hire the right Florida attorney for your case.