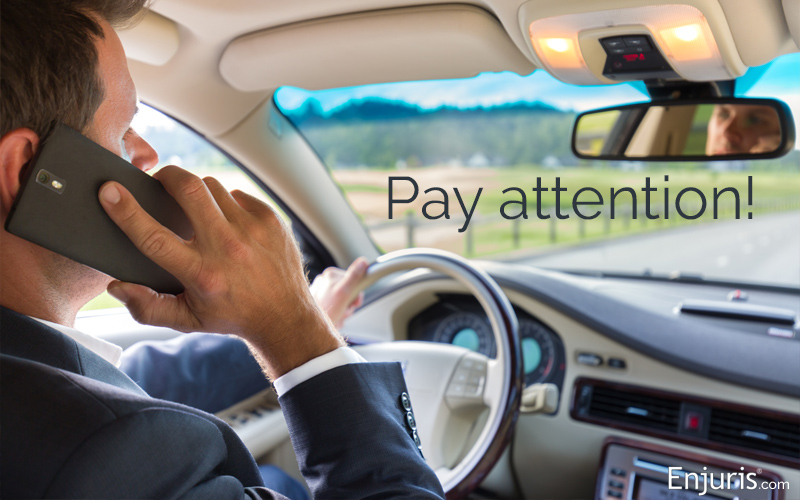 Every day in the United States, approximately 9 people are killed and more than 1,000 are injured in crashes that involve a distracted driver.

In Georgia, roadway fatalities increased over the last decade before dropping in 2018 after Georgia passed a “hands-free law” to combat texting while driving.

Although texting while driving is a major concern, it’s not the only distraction drivers face. The National Highway Traffic Safety Administration identifies 3 general categories of distraction:

Let’s take a closer look at these types of distractions.

A visual distraction is something that causes a driver to divert their eyes from the road.

According to the Centers for Disease Control & Prevention, taking your eyes off the road for 4.6 seconds (the average time it takes to send or read a text message) while driving 55 miles per hour is the equivalent of traveling the length of an entire football field with your eyes closed.

Diverting your eyes from the road obviously increases your risk of hitting something in your path (such as a slowing vehicle or a fallen object), but according to a research published by the International Association of Traffic and Safety Sciences, it also limits your ability to maintain your lane position. When your eyes aren’t on the road, your vehicle will drift laterally. According to researchers, a quick glance causes you to drift more than 11 inches.

A manual distraction is something that causes a driver to remove one or both hands from the steering wheel.

According to researchers at the Virginia Tech Transportation Institute, taking just 1 hand off your steering wheel, to send a text message or otherwise use your phone, increases your risk of crashing by 23 times.

Part of the problem with manual distractions is that they divert your focus from the road, but they also limit your ability to turn your steering wheel quickly if an object suddenly appears in your path or you lose control of your vehicle.

The phone is the most common manual distraction. In the 3 months leading up to Georgia’s “hands-free law,” drivers in Georgia were texting and using apps 19.5% of their time behind the wheel. But phones aren’t the only manual distraction. Other common examples include:

A cognitive distraction is something that causes a driver’s mind and focus to wander to something other than the task of driving.

Unsurprisingly, visual and manual distractions can also be cognitive distractions. However, even drivers who are looking at the road with both hands on the steering wheel can be cognitively distracted.

Interestingly, the National Safety Council compiled more than 30 research studies and reports by scientists around the world that found that hands-free phones are just as dangerous as regular phones when driving. This is because the cognitive distraction from paying attention to a conversation contributes to numerous driving impairments.

If you’ve been injured in an accident in which the other driver was distracted, you may be able to receive compensation for your injuries. Consult an auto accident attorney near you to determine your next best steps.